INDI can control most cameras supported by GPhoto library using the INDI gphoto driver. This includes most DSLRs cameras. Make sure the OS does not mount the camera as a disk-drive as this would prevent the driver from communicating with the camera.

INDI should be able to support any camera supported by libgphoto2, including Canon, Nikon, Pentax, Sony, & Fuji DSLRs. Once you connect, you will be provided with a standard set of controls supported by INDI, as well as full exposure to all parameters supported by libgphoto. You must set your camera to Manual/Bulb mode in order to get full control via INDI. This can be done by turing the rotatory controls until they point at BULB or MANUAL mode.

There are two types of drivers available:

Besides the differences outlined above, the drivers are idential in every other way.

On the first time you use the driver, you must set the required CCD Information specific to your DSLR model. Your client should provide you with a list of drivers you can connect with.

The gphoto driver provides you with an option to compress incoming streams and images. The compression option enables you to balance between network load vs. CPU load.

If your camera uses an external shutter release cable, make sure to indicate the port of the shutter release USB cable (usually /dev/ttyUSB0) in the Main Control tab of the GPhoto driver before connecting to the camera.

Additionaly, users may employ DSUSB/DSUSB2 from Shoestring Astronomy in order to control the shutter. Before you connect, the port field must be set to DSUSB.

By default, the transfer format is set to FITS. Images from the camera can be transferred in native (e.g. CR2, NEF..etc) without converting to FITS first. This can reduce latency and CPU usage on the server. Furthermore, FITS images can be larger in size compared to native formats such as RAW/JPEG. The FITS images are transferred as Bayered frames and it is the clients responsiblity to debayer the image upon reception.

Raw images from the camera will be in whatever mode your camera is set to (normally either RAW or JPEG). When using RAW images, it is the client software's responsibility to convert these to a usable format via libraw or equivalent. You cannot use RAW+JPG mode it is not supported by the driver, you must pick a single format.

To retain Image Format settings between sessions, set the desired Image Format then save the driver configuration under the Options tab

The image info tab contains information on the resolution of the CCD (Maximum Width & Height) in addition to the pixel size in microns. Make sure that the information in this tab is correct and update it accordingly. By default, all values are set to zero, please update it to fit your CCD chip specification. The resolution value will change automatically after each exposure in case the image resolution is changed due to selecting a differently sized image from the drop down list.

Some clients like KStars will ask you to specify the maximum resolution of your camera and would limit the camera's image to this specific size.

Since GPhoto tends to produce different image sizes for CR2 vs. FITS image. it is critical to use only one method when imaging. You cannot take CR2 flats and mix them with FITS Lights. All images in a session must be all CR2 or all FITS.

GPhoto driver supports mirror lock in order to reduce mechanical vibrations. It's currently implemented only for Canon DSLR. You must Enable Mirror Lock feature in your camera before you can use this feature in the driver.

To enable it in your camera (usually in the last tab, Custom Functions, called Mirror Lockup). Then set the serial port for shooter, and open the gphoto camera as usual. When a serial port is set, now a new setting appears on connection: "Mirror lock", with a default value of 0.

Set it to a reasonable value (2 seconds will do). Now when shooting, you'll hear two "clicks" from your camera instead of the usual one: the first pulls up the mirror, the second (after the number of seconds you specified) opens the shutter and starts the exposure.

You can opt to save all captured images to the local storage. This is the local storage of the device running the INDI GPhoto driver and not the SD Card. Settings for saving to SD card is also available. Under Options tab you can select the Upload mode:

GPhoto driver support live video preview mode if supported by your camera. KStars is the only client currently that supports live preview mode. To Enable, click on the Enable Preview in the driver's main control tab.

If supported by your camera, you can control Focus In and Focus Out with speed settings under the Focus tab of the GPhoto driver. You can autofocus with any client that supports INDI auto-focusing.

Once you're connected, you can capture images as FITS or RAW from the camera. When using Ekos, you can configure what DSLR format is set to in capture module. Ekos automatically switches format to FITS when using Focus, Guide, and Align modules.

When using the driver for the first time, you must set the CCD Information specific to your DSLR model. Initially, all parameters are set to zero as shown below. 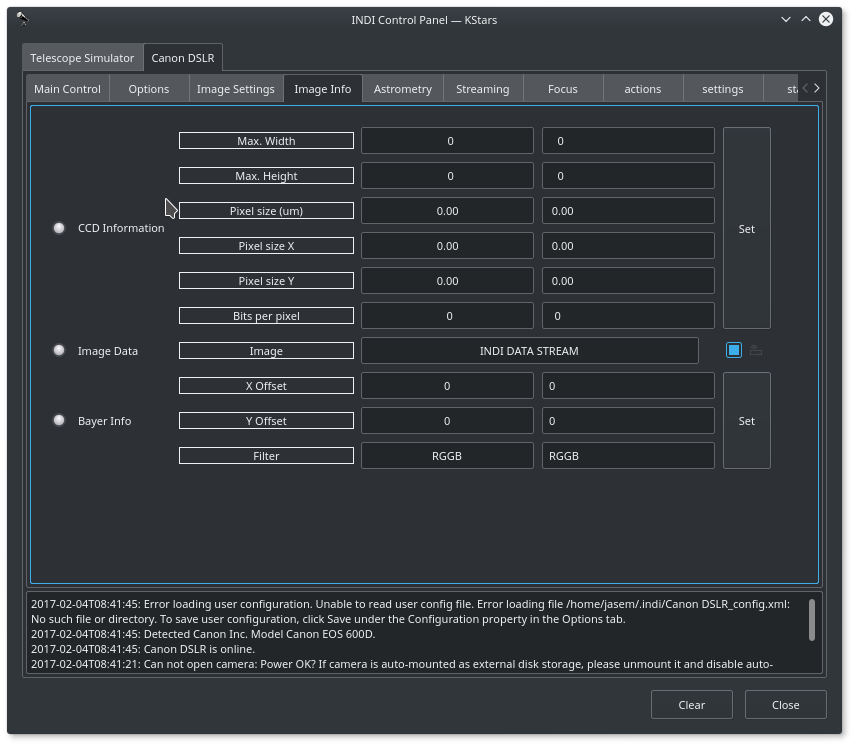 Fill and set the required parameters. For example, for Canon 600d. The following values were used. Please note that Bits Per Pixel is always set to multiples of 8 regardless of the DSLR's bit depth. This is because FITS format are transferred in multiples of 8.

After setting the parameters, you should save the parameters to the DSLR's configuration file so that they are loaded in future sessions. 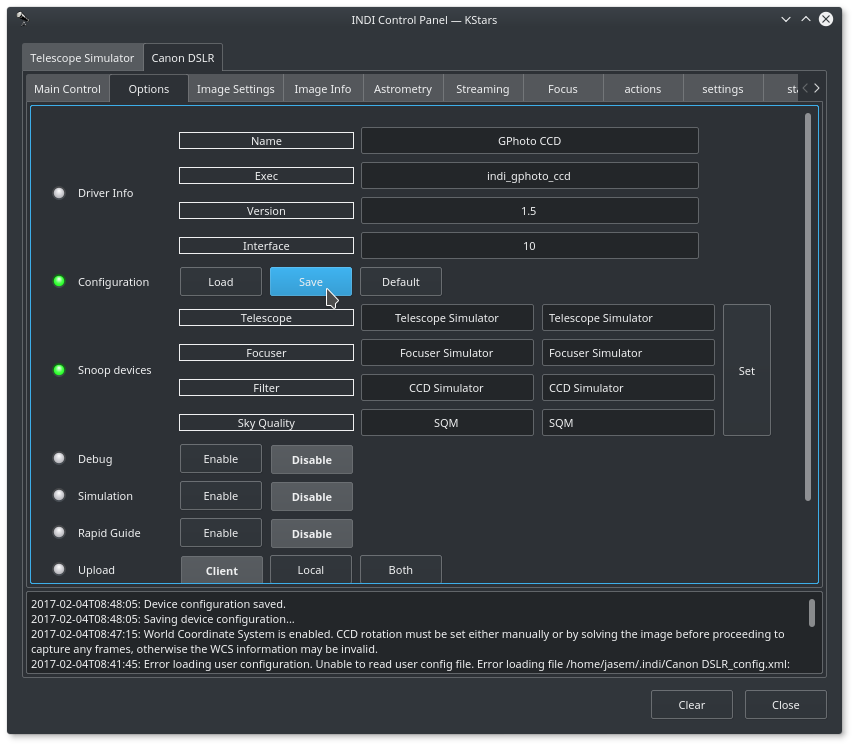 INDI will detect any extra options that your device may support and if found, INDI shall construct dynamic controls (knobs & switches) to control these features.

Nikon is officially supported under GPhoto but the level of features supported is less than that of Canon cameras. Noise Reduction must be turned off. For bulb exposures to work, you must set Capture Target to SD Card. By default it is set to Internal RAM which is problematic in Nikon cameras. Please save configuration after setting capture target to SD Card. If all fails, resetting the camera to Factory Defaults might help some users. 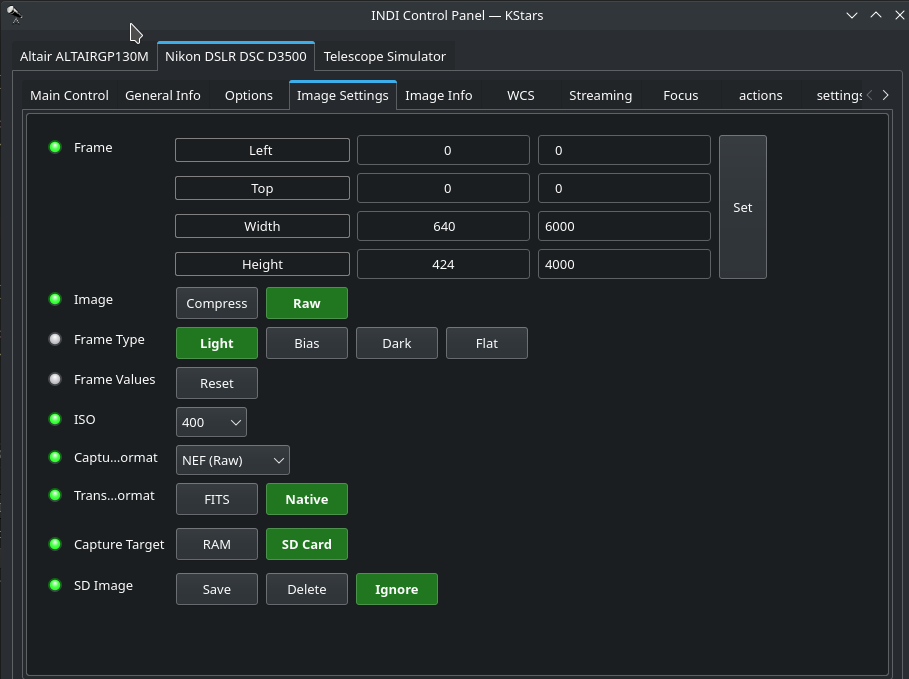 There are three settings for the SD card image handling:

The following settings would make capture possible with Canon 1DX camera according to this INDI Forum Thread:

Main Control:
Mirror Lockup = 0 (It I set the mirror lockup on it would fail, and I would need to reboot the system and restart KStars on the Mac)

Options:
Force Bulb = OFF (Camera was set to Bulb mode, if I used Force Bulb it would fail)

Camera produces CR3 formatted RAW images which are currently only supported on StellarMate. In case you run into capture issues, make sure to enable "Release shutter w/o lens" in C.Fn5

Fuji cameras are supported with some limitations. Checkout the detailed HOWTO for operating Fuji X-T3 and X-T4 cameras.

When using X-T1 with Remote Serial Shutter, please checkout this detailed HOWTO for operating the camera in BULB mode.

The INDI Sony driver is reported to work well with the Sony A7III camera.

Here are some in-camera settings that might be helpful:

Check the there are no features in the camera that prevents the camera from going to Bulb mode (e.g. Silent Shutter).

For some cameras, setting to BULB mode does not work and you must switch it to MANUAL.

The driver offers two destinct methods of taking an exposure. Bulb (B) and Manual (M) modes

The first one utilizes the camera's internal list of predefined exposure times (exposure widget: shutterspeed). In this mode, when an exposure is triggered, INDI compares the desired exposure time to the shutter speeds offered by the camera. If it finds an exact match, it fires the shot. If it does not find an exact match, it selects the closest one (if considered close enough, otherwise INDI will fall back to B mode which does not work with these cameras) and fires the shot. For example, a Canon 5D Mk2 does not offer 1/100s. When a 0.01s exposure is requested, INDI triggers a 1/90s exposure. The fits header will show EXPTIME 0.0111111s in this case.

The second method utilizes the camera's bulb mode (bulb widget: eosremoterelease). In this mode INDI opens the shutter, starts a countdown, and as soon as zero has been reached, it closes the shutter.

The FORCE BULB (under Options tab) setting tells INDI whether to look for camera internal shutter speeds first, or use bulb mode right away.

Unfortunately, cameras like the Canon 5D and 6D have a separate B-mode (selectable via main dial) whereas for most other Canon cameras "B" is just one of many shutter speeds within "M" mode. What it means is INDI cannot toggle between Manual and Bulb with cameras like the 5D and 6D. What's more, INDI reads the list of available shutter speeds from the camera at startup, when the initial connection is made. If the 5D/6D's main dial is set to "B" at that time though, the list contains "bulb" only. In order for INDI to obtain the full list of available shutter speeds, the camera must be set to "M" when the connection is made.

Therefore, as a general rule of thumb:

When other combinations are attempted, it results in undefined behavior. The results depend upon two things:

This wold lead to 3 exposures of 1/10s each (the camera keeps firing 1/10s shots for as long as INDI runs its count down), the first two triggering error messages and the last one resulting in a downloaed image.

Taking flats requires particular attention. Users can set an ADU level and some clients (e.g. Ekos) will try to get there by taking test shots and adjusting exposure times until the desired ADU level is reached within a certain tolerance that can be set by the user, too. Some flat boxes feature a (too) bright light source which in turn requires rather short exposure times in order to achieve a suited ADU level. So the "B"-mode camera user might want to set the main dial to "M" and switch "Force Bulb" OFF. Let's assume the target ADU level is set to 30.000, tolerance is set to 1000. INDI takes a 1/10s shot which delivers 2400 ADUs. The next shot is taken at 1s which delivers 24000 ADUs. Now, in order to get to 30.000, the exposure time would have to be increased by 25% (to 1.25s). However, the camera does not offer a shutter speed of 1.25s. The two neighbouring shutter speeds (1s and 1.5s) cannot deliver the targeted ADU level within the given tolerance. This attempt to take flats will fail. With other cameras, INDI would automatically switch over to B mode, start a 1.25s countdown and succeed. B-mode cameras require the user to manually intervene. Two possibilities:

In case the camera fails to connect or capture, please make sure of the following:

Please check the INDI Forum DSLRs FAQs before submitting any support request. If you found a bug, please report it at INDI's issue tracking system at Github.