Guide/docs for building a DIY focuser?

Guide/docs for building a DIY focuser? was created by Dave Hartburn

Can anyone help point me in the direction of some documents for building a DIY focuser and how INDI actually uses a focuser?

I can find examples of people having built their own and masses of documents on how to add the focuser to INDI, but what I'm struggling with is finding out how INDI expects to be able to talk to a custom driver and how you turn the thing once you have it up and running. Having never used an automated focuser, part of it may be me not knowing what to expect.

I have designed and 3d printed a motor mount and cogs, added a stepper motor to a Raspberry Pi GIPO (running astroberry) and have a very basic python program which tests the concept by allowing focus control with the arrow keys. If I'm going to develop it further then it would make sense to make it INDI compatible. I'm assuming INDI sends certain messages to a running driver and expects something back. I've been unable to find what it sends or how it talks to it. All my googling has shown people who have just done it.

Once you have it talking, I was expecting to have a couple of controls to click, to focus in and focus out, perhaps being able to change the speed/granularity of the focus. The best I can find of use is a video showing someone with a similar DIY unit:


They seem to have built a few presets of the position number for where they want the focuser to go to then click go. Is this the way INDI works? While you work out what the focus position is, do you just type in say 1500 and go, then 1502, then 1504 etc until you find a crisp focus.

Any pointers on where to look for DIY drivers appreciated. I'm happy with any language.
The following user(s) said Thank You: Hartmut
6 months 8 hours ago #66688

Replied by Bart on topic Guide/docs for building a DIY focuser?

Currently I have a PCB designed & made, and will design the 3D printable housing for it.
This one is designed to fit on the back of a NEMA 17 stepper motor and be fed with either a 12V ext power or simply from the USB.

If you like, I can send you a PCB that works well, but only requires a small repair (for the IR sensor signal wire) because I was stupid enough to send the design for manufacturing before properly checking it, haha! 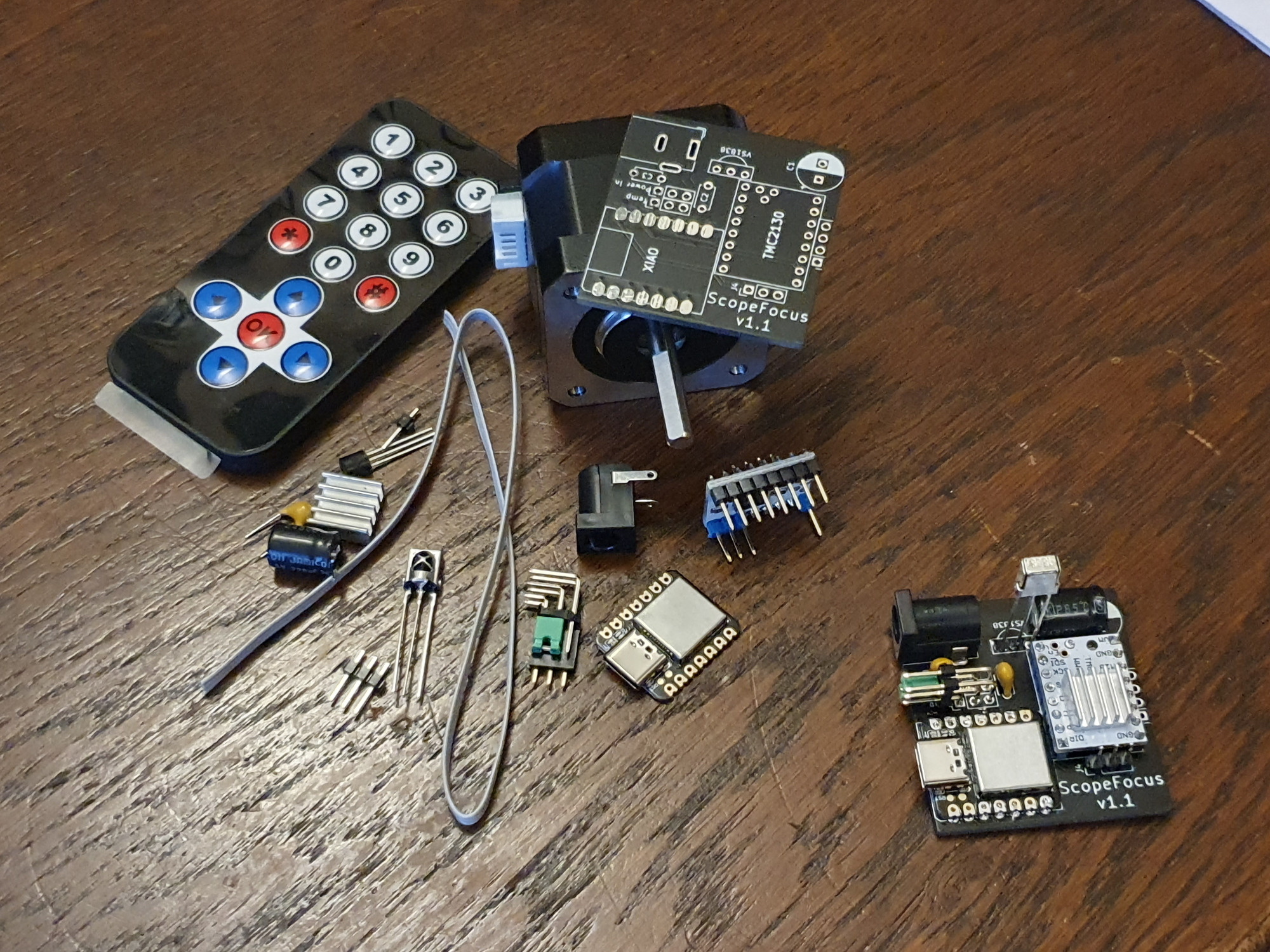 To the right the assembled board.

Replied by Dave Hartburn on topic Guide/docs for building a DIY focuser?

Thanks, I really appreciate the offer of the PCB. It is not quite compatible with what I'm doing so I will not take you up on it. I'm using a Pi with Astroberry and going straight into the GPIO headers. I also have a little SDD1306 screen which will flash up the IP address of the unit and what wireless network it has joined on boot.

You have given me a couple of ideas though. I was wondering if I should have a small button pad hanging from the Pi to be able to move the focuser without going into the full on software launch. I never thought of an IR remote, so one of them now on order.

Basing the focus control on moonlight seems to be a good way to go and the commands sent from INDI seem simple. With my program being local and INDI looking like it wants to send to a device, I need to think about how to setup communications. Listening to network sockets and pointing INDI at localhost:XXX is probably the best way.

I can't find a guide for what INDI sends and expects back, so I'll try dropping that code on a spare arduino and watch the comms. Even without a motor attached, it should give me a good clue.
5 months 4 weeks ago #66720

Replied by Kevin Ross on topic Guide/docs for building a DIY focuser?

You might want to check out indilib.org/forum/focusers-filter-wheels...or-raspberry-pi.html
4 months 3 weeks ago #68228