KSTARS/EKOS for Windows issue was created by Ladislav Heller

I have the following setup: I am using EQMod (SkyWatcher AZ-EQ5pro mount) and CanonDSLR (Canon EOS 1300D) drivers in the EKOS profile via indi-web manager.
Following things are working without problems: However, when I try to polar align, I have the following serious issue:
When I start polar align, EKOS takes the FIRST photo and plate-solves it. Then in normal circumstances, it should rotate the mount around RA axis by 30 degrees. But in my case at this point, the whole KSTARS app crashes and exits immediately.
I reproduced this behavior many times using the above described setup. Interesting fact, that using KSTARS v3.5.4 for Windows the polar align works perfectly, the issue comes (at least for me) only using v3.5.5.

The only thing I was able to figure out, that the problem on Windows is with the cfitsio.dll module which comes with KSTARS 3.5.5 installation because the crash is logged into the Windows Event Log and can be checked by Event Viewer: 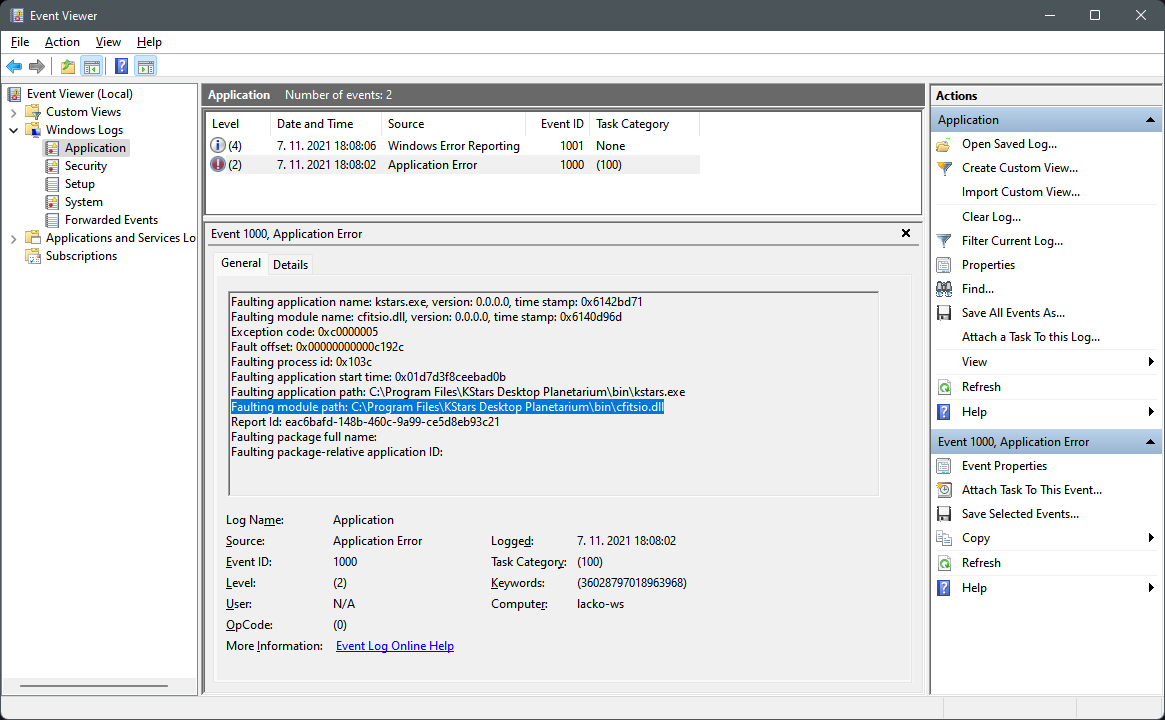 Had anybody such issue with polar alignment on KSTARS/Windows ? Any idea, how to workaround or solve that issue?

I was able to reproduce the same crash issue using CanonDSLR and TelescopeSimulator drivers (while still on KSTARS/Windows v3.5.5).
Interesting that when I switched to CCDSimulator + TelescopeSimulator, the problem did not occur and polar alignment routine worked.

I think the problem is more or less connected to the combination of CanonDSLR driver and KSTARS/EKOS-Windows v3.5.5.

Replied by Kevin Ross on topic KSTARS/EKOS for Windows issue

Sounds like you have a good workaround (revert to 3.5.4).

There are a couple things you can try.

1. Do you have a guidescope? If so, try using that for polar alignment instead of the Canon.
2. Try different plate solvers. Instead of the internal solver, try ASTAP, for example.
The following user(s) said Thank You: Ladislav Heller
1 year 2 months ago #77344

Thanks for hint, I'll try to polar align using my guide scope and ASI120MC camera.
BTW I am using my own Cygwin build of astometry.net for plate solving which works perfectly (not only in EKOS, but everywhere).

Anyway, I think force close of an application is a quite serious problem which should not happen...
1 year 2 months ago #77365

Problem solved by changing the following things:
Still don't understand why, but using the above settings I have no more force close of KSTARS v3.5.5 on polar alignment.
Maybe this helps also others.
The following user(s) said Thank You: Damian
Last edit: 1 year 2 months ago by Ladislav Heller.
1 year 2 months ago #77530

I'm glad you got things working.

However, if it were me, I'd much rather use the guidescope and ASI120mm for polar alignment than a DSLR. The main reason is when it comes time to adjust the alt/az bolts, you want to loop images quite quickly, about 1 per second. I've never been able to loop images from a DSLR anywhere near that fast. Faster looping of images makes the polar alignment routine so much more pleasant. And don't worry about accuracy, the resolution of a guide scope with the guide camera is plenty high enough to get you a good polar alignment. If you're autoguiding, you only need to be within a few arc-minutes of "perfect".
1 year 2 months ago #77541