I could be wrong, but I thought that the backlash number is not used in the linear process. That is why it moves a large amount outward and then moves inward to eliminate backlash.

However, as I've written before, I'm not sure that the "outward/inward" move is effectively removing the backlash in my setup. I don't know how to prove it, but when EKOS sends the outward command it immediately sends an inward command. Based on simple observation, it feels like the focuser hasn't completed the outward move before receiving (and moving) inward. Therefore, the focuser is not at the expected position when it starts the second pass. Just my humble opinion. I wish there was just a brief pause between commands.

I also would really like to see a single pass process. The second pass never improves my focus point and often confuses the process, causing a redo.

Two (Edit: Three) things:
The Linear method does not depend on a backlash correction. It tries to overcome that by the first-out-then-in movement. But a BL correction in the driver of the focuser will not be deactivated by it, so it will just see a smaller (or non-existing) BL.

As for your issues, one thing might be to verify what is 'in' and what is 'out'. What actually counts is that the element that moves should move against gravity. For classical refractors and SCTs (etc.) with a focuser in the back that is easy.
With an SCT and the internal mirror focusing that gets reverted, as you have to end the move moving the mirror up, which will move the focus point away from the telescope. And with a Newton, it will depend on where the exit is positioned (and might then even change depending on pointing)

Finishing the move - as mentioned here, try to increase the polling time in the driver. If you set that to, e.g., 2000ms, there should be at least 2s between start of the first move and start of the second move. That would at least prove that (also) your focuser works as expected. Also - have you checked the INDI tab of your focuser? IIRC that one should always report that it has reached the requested position before it accepts new commands.

And of course I agree such a 1-pass is a good idea to help those having issues. It's just that I think most of those issues are not with the algorithm itself, but rather with the setup. And finding out what causes the problem is always a good idea - regardless how you're going to handle it

Thanks for the explanations!

Good to hear on the backlash... as you say, it shouldn't really matter with linear.

On focus with a SCT... I can understand the difficulty with the focusing mechanism. For me, it's all the more reason to keep it simple. First form a good curve on the first pass, then move out a large amount and back to that position.

On the polling time... This may be where I'm having issues. Mine is set at 1,000 ms (1 sec). Based on what I hear when it moves out and then moves in, it is nowhere near a 1 second delay. I'll need to check the messaging to see if it reports reaching the position. Next time, I'll try an exaggerated polling time (like 3,000) to see if I can discern a true delay.

But if the focus was off by a little, then the first one will get very close, but not perfect. Then, a second run of the Autofocus will nail it on the first pass.
But this is different than just letting the autofocus run two passes. With two passes in one run, the results are not consistent. Stopping the autofocus, and then restarting it after that first attempt is always better.

In all cases - the current routine always stops AFTER it detects an increase in HFR, but then uses that incorrect focus point instead of simply moving back to the best calculated spot and using that.
iOptron CEM120 EC2 and CEM25P
Celestron C11 EdgeHD
William Optics Star71
ASI 1600Mm Pro, ASI 462MC
Moonlight motorfocus & Esatto focuser
LodeStar X2 and ZWO OAG
DewBuster
NANO PC-T4
2 months 1 week ago #83406

Replied by Alfred on topic New Focus Algorithm in Ekos


Peter, you nailed it! This is EXACTLY my experience. The 2nd run always stops too far on the "left side" and doesn't return to the point of best focus.

Just to be clear Linear1Pass (L1P) is a new focus algorithm, so the existing algorithms will operate unchanged when L1P is released. So those happy with Linear or any of the other algorithms will be able to continue using them as they do now.

L1P will also compare the HFR prediction from the curve fitting process from pass 1 with the HFR measured after the focuser has moved to the solution (and an extra subframe taken and processed). It will put out a log message comparing the expected vs actual HFR. You will also be able to compare the 2 values on screen (the curve fitting prediction on the graph and the measured HFR in the HFR box under the curve.

Before L1P goes live you could compare these values for the existing algos by doing an Autofocus run and getting the HFR at the optimum focus point and noting the HFR. Then when Autofocus finishes, hit the "take a subframe" button, let the processing complete and see what's in the HFR box at the bottom of the graph. There will be some randomness so the numbers will never match exactly but will give you a feel for whether there's an issue or not.
The following user(s) said Thank You: Peter Sütterlin, colin rooney, Rafa Barberá
2 months 1 week ago #83415

The Linear 1 Pass focus algorithm has been merged into the code base and is now available in the nightly builds so if you are able to take the nightlies then you will be able to give it a go.

I have updated the document detailing the changes. It includes a section with suggestions on how to use it.


I'd be interested in any feedback. If you find a problem please send a log with "focus" messages enabled.
The following user(s) said Thank You: Spartacus, Bernd Limburg, Doug S, Juergen
1 month 4 weeks ago #83671

Nice work! It will be nice to see this included in the baseline. I've sent you a PM on another focus related subject that might be of interest. CS Doug
RASA11, Celestron CGX-L, ASI183mc Pro, 60mm guider + ASI290mm mini, ASI EAF focuser, PPB, Rpi4-4Gb+SSD, Powered USB3 hub, hardwire Ethernet.
1 month 4 weeks ago #83673

Does anyone know if this nightly update is available for Mac OSX as well?
EDIT: I just saw that it was indeed included in the latest Mac OSX nightly build. I will test it as soon we get a clear night.
It's monsoon season now here in NM.

This link is helpful for Mac nightly builds:
indilib.org/forum/ekos/11408-announcing-...-on-macos.html#83666

As you're probably aware the nightlies include the latest versions of s/w which may / may not work. I spent a few minutes with Build #1560 which appears to work from an L1P perspective. The latest version Build #1563 has problems with memory allocation somewhere and won't take any subframes so is unusable. Sure this will be fixed quickly.
1 month 4 weeks ago #83680

Replied by Sergio on topic New Focus Algorithm in Ekos

Wow, this new algorithm fits perfectly what I was proposing here only 4 months ago (and you also had already in your mind by then) and even more that I didn't think of!! (different curves, weighting by HFR stdev, ...) Last night I gave it a try and it went quite smooth! I can afford to make focus exposures longer to get better SNR and even so, autofocus takes way less than before. Thanks so much for your effort, for me this is quite an improvement.

Playing with the parameters I occasionally ended up with a failed autofocus, that was quite expected as I pushed some of them. But although the log reflects the failure, it doesn't show why it failed:In this case, I guess it didn't meet the minimum R2 I configured, but I think it would be desirable if the failure reason gets logged.

Also, the Analyze tab didn't plot any HFR measurements in the graph, and "Iterations: 0" is shown under Details (in the log I see that this particular autofocus run took 9 HFR measurements).

Thanks very much for the feedback Sergio. If you configure logging like this: 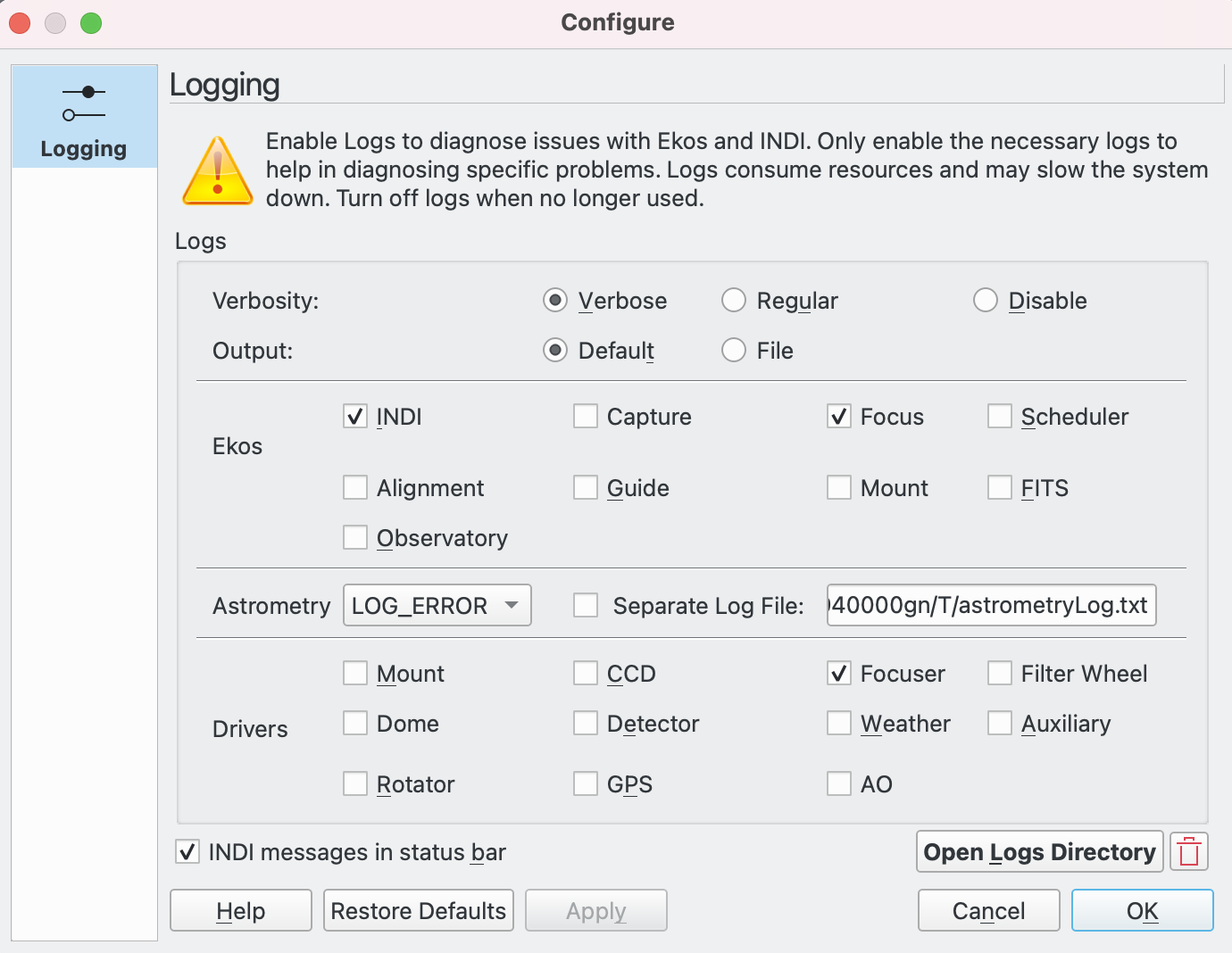 I suppose your point is that it could be a bit more obvious as to why the rerun happened (as opposed to having to go hunt through a detailed log file). Good point, I'll have a look at this.