Setting up for Meridian Flip

Mine failed last night and it looks like it was capturing while the flip was occurring. And sorry, no logs... I was able to re-slew/align/guide and restart the sequence from bed. I sorta expect this and since I was on a target with good framing (SH2-131) I didn't to play Flag games like was done on the Eastern Veil, the re-acquisition process worked.
Last edit: 1 month 1 week ago by David Tate.
1 month 1 week ago #85410

I had a successful flip last night, I know there was a new SM patch. Not sure a fix was done, but it worked without an issue after several failures in a row.
1 month 1 week ago #85448

Failed again last night. The Mount tab said... "Failed meridian flip, trying again in 4 minutes" I disconnected without writing it down. (facepalm) Something to that affect. It then worked, but none of the other processes kicked off, no plate solving, no guiding. So I took over and restarted the tasks.

Again sorry, no logs. I did this from bed (waking up to check on the process). Tonight I'll turn on logging and see what I get.

Replied by David Bennett on topic Setting up for Meridian Flip

Hi Wolfgang. I think this may be related to the guide calibration bug. I am now set to re-use calibration and manage to get a meridian flip which works but still see issues with first exposure after the flip. To be more precise after the post flip re-align or indeed after the re-align at the start of a job. (I suspect after any re-align) 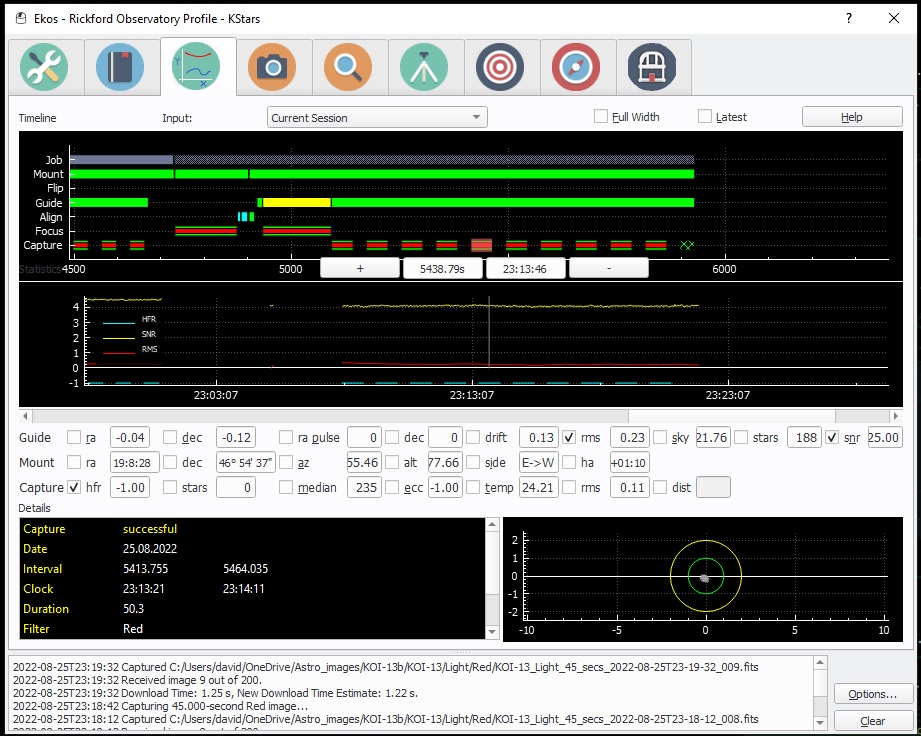 After a re-align guiding starts for about 13 secs before it suspends and does another focus!
After it completes the focus it then resumes guiding and immediately starts the first capture even though in the EKOS settings I have specified a settle time of 60 seconds. 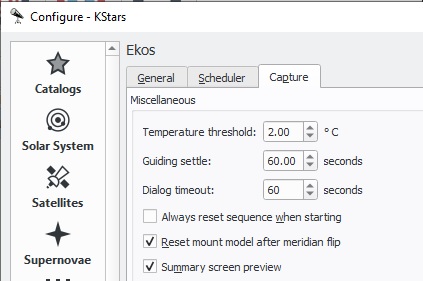 I watched the guiding TAB and during the focus it shows under guiding info as 'Run' .
I don't really understand where 'Suspended' and 'Aborted' fits into the 3 states for guiding which are Idle, Prep and Run?
My first capture after Align has large star trails and second and subsequent captures OK after the guiding has had time to settle down.
In short 2 issues:
1) settle time doesn't happen after guiding is resumed.
2) If a re-focus is always done after an align to ensure focus is maintained (mirror flop or change in altitude for example) then would it be possible not to re-focus if the alignment movement is only a small amount?
3) I don't understand why is starts guiding for a few seconds between re-align and focus.
1 month 4 hours ago #85704


Again, no logs, but I was watching the MFlip and I saw it was imaging while it was setting up the guiding... when Autoguiding was completed, the image popped up as I clicked over to the CCD tab. No big deal, just an image to throw away in Blink. 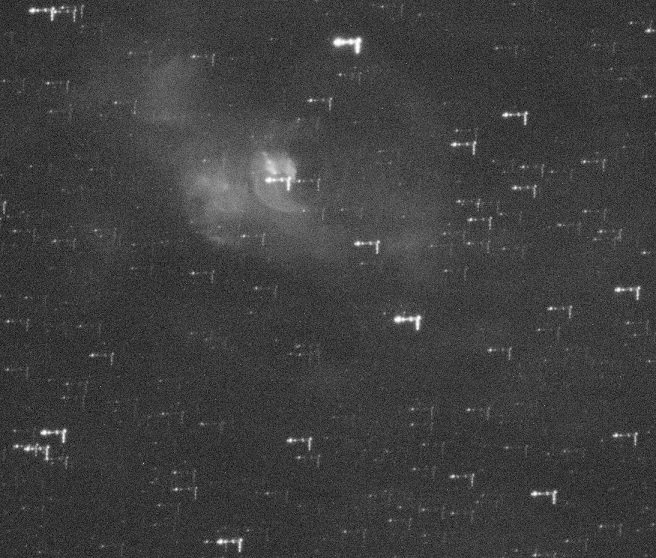 Replied by David Bennett on topic Setting up for Meridian Flip

Yes this is what I saw. First image after flip showed drift. There is a settle value somewhere but it didn't seem to create a delay before first capture. I configured re-use for guiding so it doesn't attempt to calibrate after flip. Actually it does very briefly message calibrating with re-use but it is very quick so I am guessing it is just reading the stored calibration parameters.
3 weeks 3 days ago #85981