OK, I thought about taking the hardware and second PC entirely out of the equation and I can reproduce this in KStars using nothing but the telescope and mount simulator. 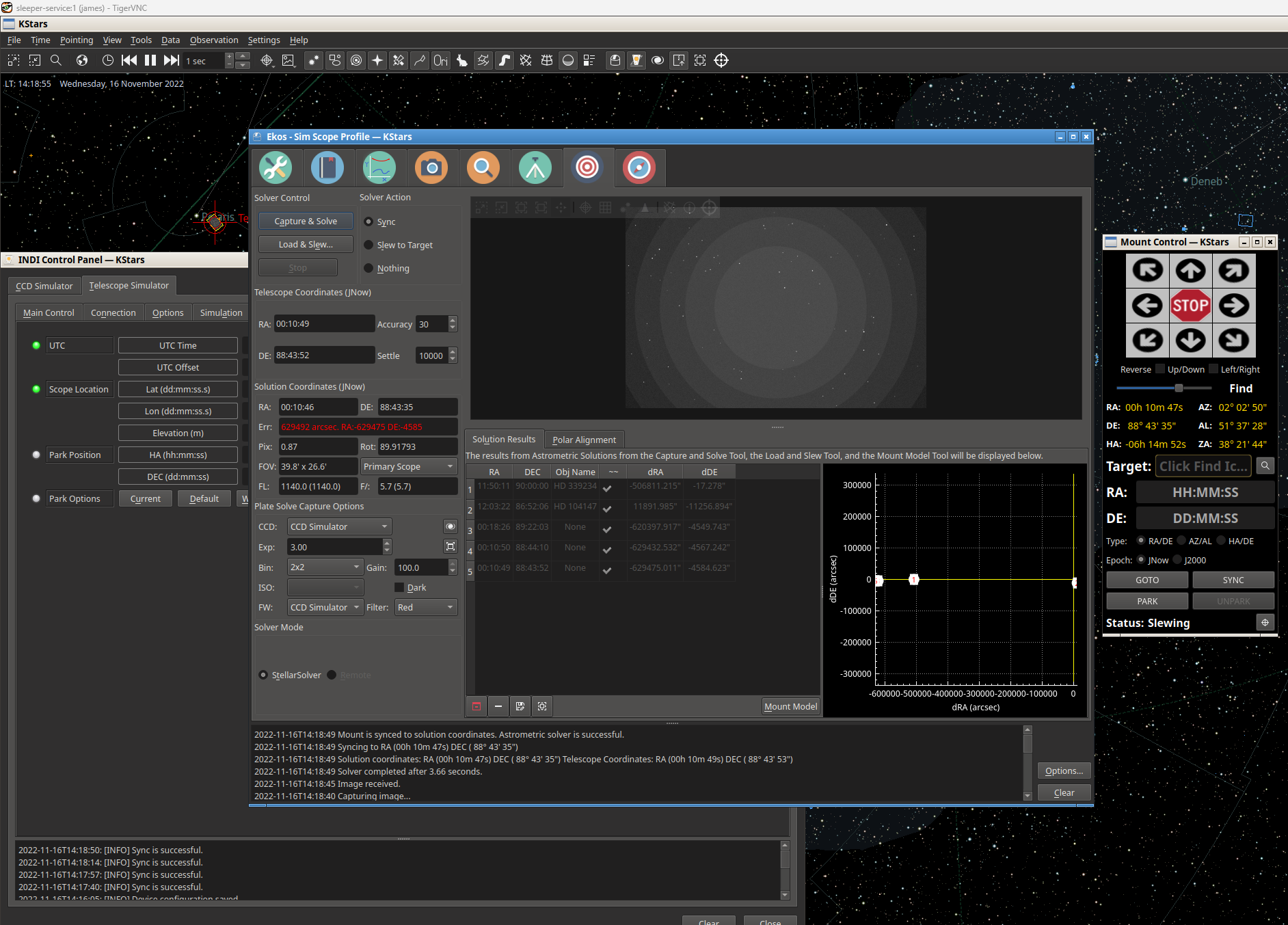 So this looks like either a bug in the astrometry.net side of things (unlikely, I'd have thought) or KStars... but it's definitely not the mount/telescope/etc!
2 months 2 weeks ago #88199

Don't know about anyone else... but had a chance to get out tonight as it was clear, and when trying to GoTo (via KStars to Caph to check the alignment out, the tracking in KStars simply stopped about 1/2 there and the mount quit responding. I disconnected the EQ6R-Pro and then connected it back, and ti continued slewing to the target and was able to do an alignment with it.Then, I decided to target NGC_133. Gets in the general area, and then when it is trying to complete the alignment, it can't as it does not appear to be slewing the mount to change the alignment.Power the entire system down, start it all back up, and it starts and runs OK... UNTIL I have to go out to do some weight movement for the RA. Try to do an alignment again after this and rinse and repeat the above cycle.Then to top it off, the guiding (which I have configured to use EQMod) for the DEC went from a fairly steady 0.23 to over 23.5 in a matter of seconds and then was bouncing all around... and when checking the scope, it seemed rock solid. And these are using same placement marks for the scope that I have been having excellent luck with. 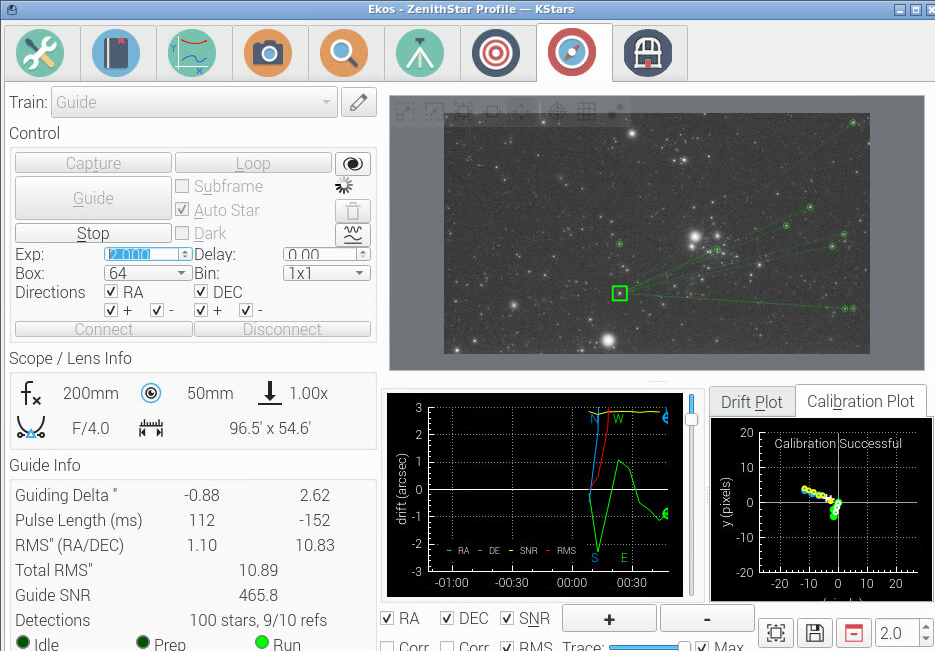 I then attach my ST4 cable and change the image train for the guide scope to track using the ZWO ASI290mm and then it goes back to this (which is not the greatest it's been but MUCH better than what it was earlier tonight). 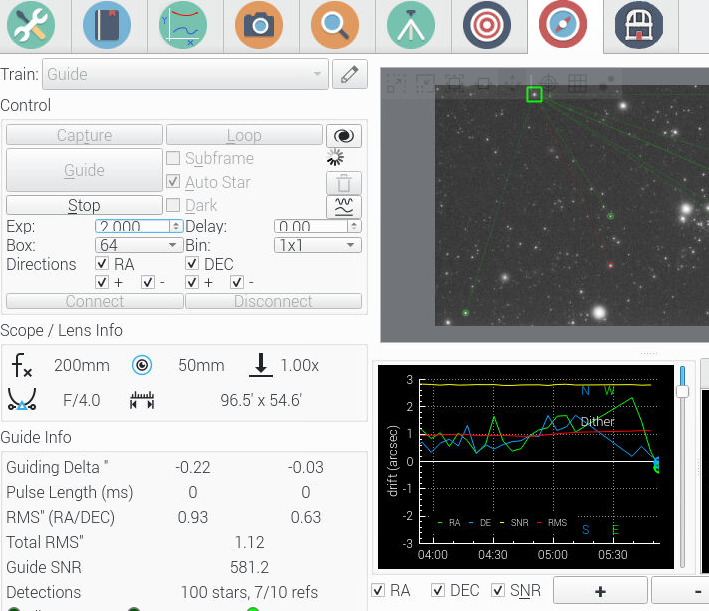 Now, tell me, how exactly do I have "insufficient stars" in the image to do alignment?
I've even got both 8.8GB data sets loaded to use for alignment. 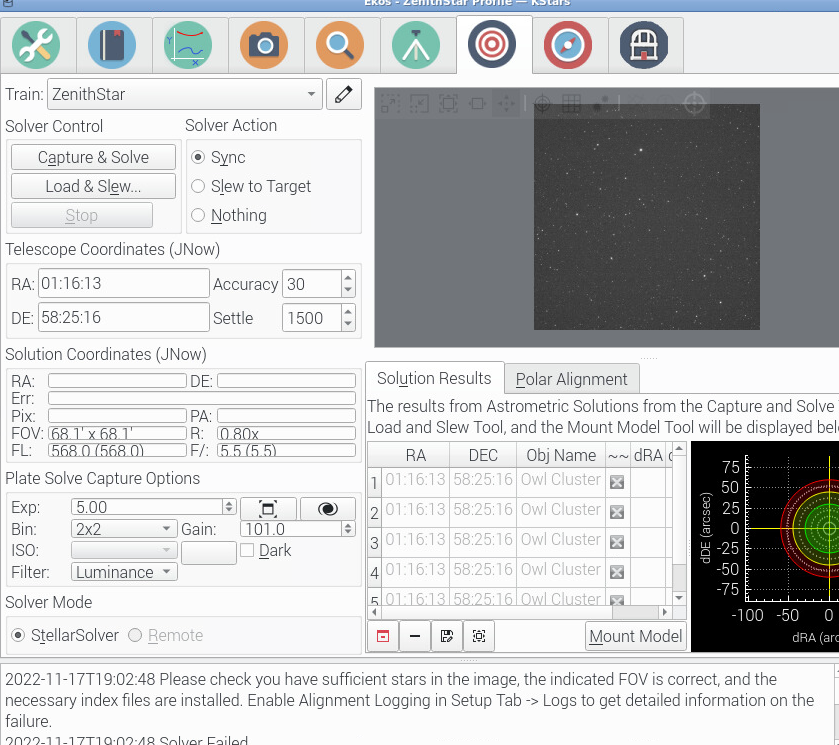 I'm beginning to have some serious doubts about StellarMate OS on the RPi. Seems like ever since the optical trains were instituted into the mix of software, stuff has gone off the rails (and I have a strong suspicion the similar developers are involved in both). And I'd REALLY like to be able to enable the logging, but StellarMate OS then became totally unresponsive to ANY input via VNC.Then, when I go outside to check the mount and scope, the weights are pointing directly west, and the scope is pointed directly up... which is nowhere NEAR where the target it was supposed to skewing to was.

And here is an example of going back to the EQMod tracking a few hours later after using ST4 and the camera. 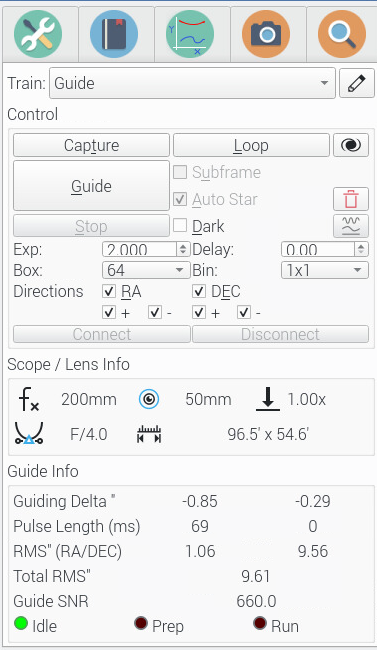 As you can see, it went fully back to crapping all over itself using the EQMod driver after over 5 hours of tracking successfully using ST4 interface.

And here we are back to using the ST4 interface 2 minutes later with NO changes made other than changing the optical train to the camera (ST4) and then doing a new alignment (which detected within range) and starting the guidng up again. 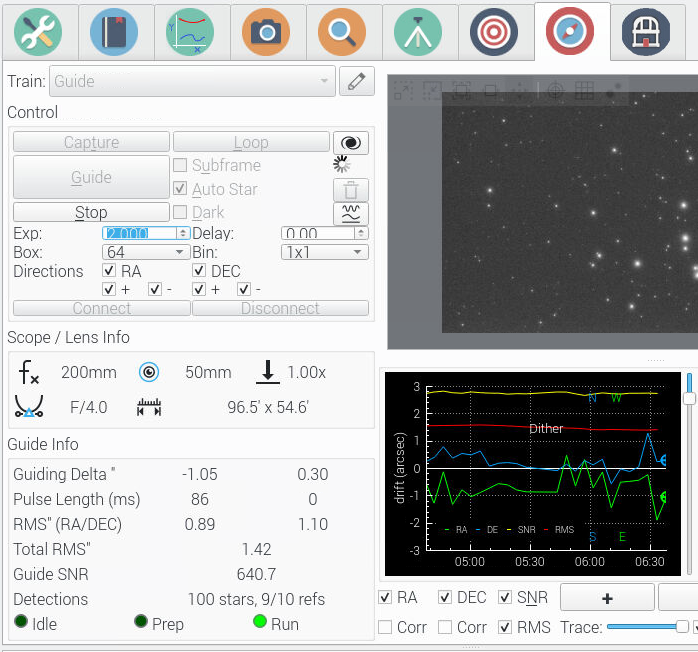 So, in my limited knowledge of programming and astrophotography but many decades of dealing with programs and BETA testing, I strongly suspect there are still issues with the EQMod driver that have not been resolved. To put it in a nutshell, it still seems to be farkled beyond regular use
A beginner trying to find their way.
Astro What? - my home away from home.

This may or may not help, but... whenever I have issues with the mount not doing what it should I park it, goto the mount tab and press "Clear Model". Then start again.
2 months 1 week ago #88251


Have tried that also, and also have gone and attached the hand controller and gone in and reset the mount via it also to the factory defaults (I'm making an assumption that it will clear all settings and set it back a it was shipped).

Still (for me) seems to be an EQMod driver issue. I'm MORE than happy to provide any log files needed as long as I can get some guidance on what is needed to be set. My problem is, for the next few days I am pretty sure I'm not going to have any good sky since we have a cold front (with storms predicted) coming into my location for at least a day or so. This is the first clear night I've had in 3 days to do anything, and have been able to work aroudnwith issues with a lot of attention targeted at the mount and scope for tonight.
I might have something set wrong, but it's rather suspicious that I've changed nothing and it worked prior to the last few "updates". And yes, I realize that I'm a rank neophyte...but when you have something that was working correctly before, and then it goes to "pot" after updates (and no changes made)... it is a pretty good indicator it was something in the updates that is causing the issues.
A beginner trying to find their way.
Astro What? - my home away from home.

Track Perry: I had similiar issues with my EQ6-R that it got stuck during slewing, or not able to align precisely that last 1-2deg error. Sometimes clear model helped but not always. What helped was that method that I wrote on previous page. After that I had no such issues.

Oh and insufficient stars also happened to me in star rich region like milky way. What helped to me was to increase keep limit in plate solver profile.
2 months 1 week ago #88254

I've had issues in the past with not managing to improve on final alignment steps, and found that switching to nearest star rather than n-star in the align options helped.

I'm not sure any of the above issues relate to the fault I am seeing in the Ekos/StellarSolver space, though. The behaviour is quite different and given that this occurs *without the EQMOD driver involved* in a simulator I think it unrelated. I've tried both the Stellarsolver internal SEP and internal solver as well as external solvers/SExtractor (my usual setup) and that all has the same issue.
2 months 1 week ago #88255

Without any ability to troubleshoot further I'm stuck unable to use KStars and I'm just burning through viable imaging nights this season troubleshooting software. More than happy to provide logs, remote access to systems, try literally anything... any ideas?