rlancaste wrote: I thought I would first look through the output of the terminal while building the dmg on my new Sierra MacBook first to see if there is any clue why it wouldn't work from the dmg on my wife's computer. I noticed a couple of things. They might be nothing, but I thought they were worth noting. Are these no big deal?

I think those are OK
The topic has been locked.
3 years 8 months ago
Offline

Posts: 2269
Karma: 22
Less More
Thank you received: 663
Ekos on Mac OS X ? #13336
I just got a new guide camera and it works great on Ekos/KStars on Mac OS X. I wanted to get a new camera because my Meade DSI guide camera did not have enough resolution, could not be binned, and the quality of the image seemed inferior. So my wife got me a nice upgrade for Christmas. It is a ZWO ASI 120MM-S. I was serving up the camera from the Cloudmakers INDIServer program and using it in KStars. It was very responsive, with extremely fast download time! I did have to copy the ASI xml file in order to get it to show up in KStars, however. Is ZWO not included in the 3rd Party drivers we are installing in Jamie's script? I will also need to test this camera being served from my Raspberry Pi and of course under the night sky, but for now, this demonstrates that it works! By the way, this image was taken with the included "all sky" lens. 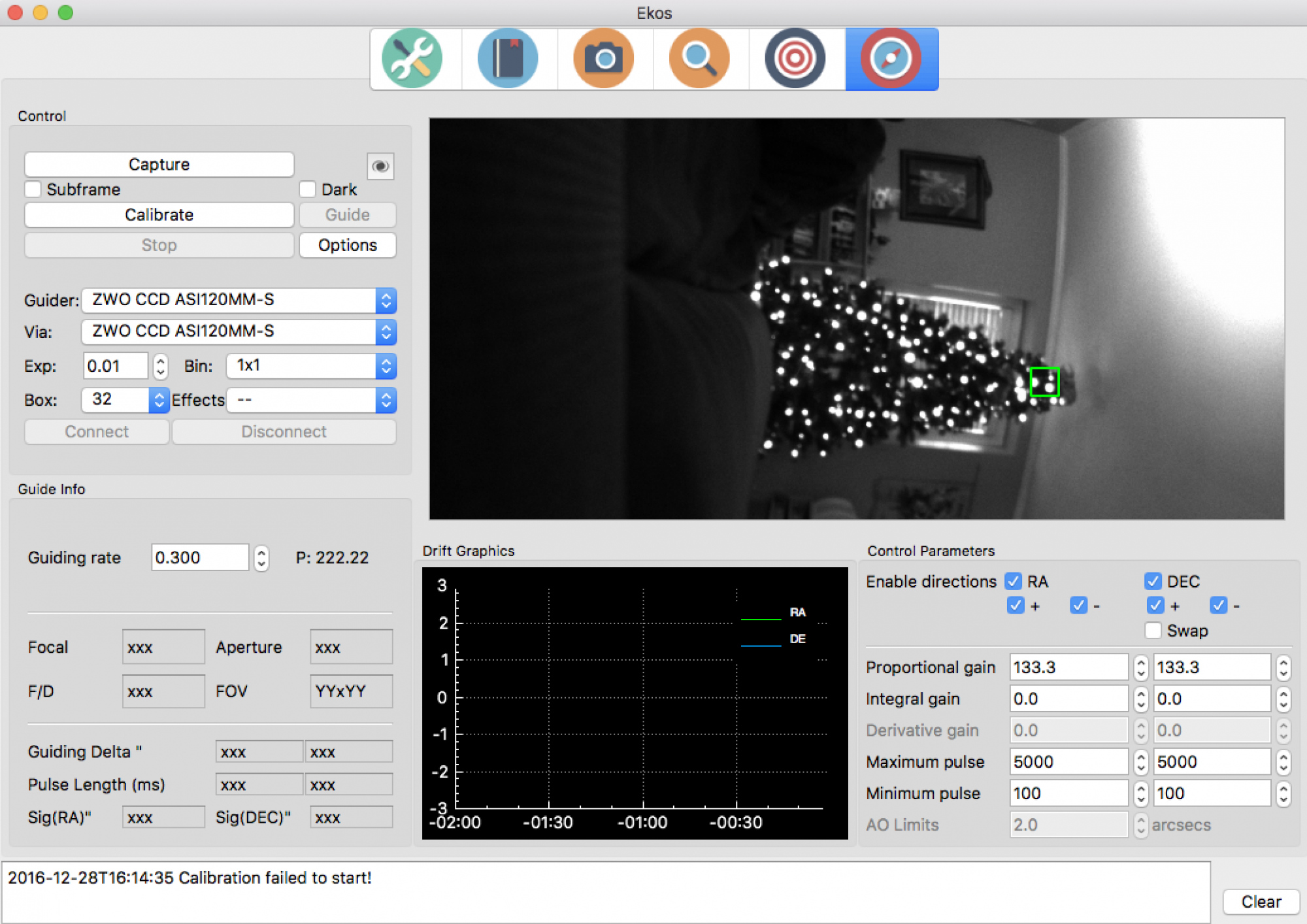 Posts: 1814
Karma: 6
Less More
Thank you received: 167
Topic Author
Ekos on Mac OS X ? #13338
Been away from the thread and forum for a few weeks, first how are you doing Jamie, how's the arm?
I used to be a biker (well, you don't really stop being a biker.. lol) and had my share of accidents but nothing ever got broken (just my bike and pride).

As for the DMG, are we any closer in finding out why it crashes on trying to take a picture?
I did compare Jamie's one and mine the other week and apart from the version of a dlyb, not much else is different.
Kstars Mac osx
Odroid C1 running indiserver (kept up-to-date with apt-get update/upgrade)
HEQ5 pro / QHY5L-II-M (OAG) / Atik 314L+ / Gerd Neumann drawer

Posts: 2269
Karma: 22
Less More
Thank you received: 663
Ekos on Mac OS X ? #13339
I too haven't been doing too much KStars/INDI related recently. I said I was going to about a week ago, and then I didn't do much. We really need to figure out exactly what is wrong. The indiserver does appear to start on my wife's computer, but taking an image with the capture module crashes it. However, you can take an image in the guide or focus module as I recall, which is odd! My wife's computer is an El Capitan machine from 2009 with no Xcode, home-brew, or other development stuff installed. I was wondering if the fact that it is an older version of OS X has anything to do with it. I did compare the otool results from the indiserver binary Jamie's script makes to the indiserver binary cloud makers program includes. They are very similar. So that appears to rule out a dylib issue.

Posts: 5
Less More
Thank you received: 0
Ekos on Mac OS X ? #13373
Before you go digging into Kstars/INDI code I would first check that your wife's computer has at least 4GB memory or preferably 8GB. You may even have failing memory issues. Also try upgrading from HDD to SSD - this is well worthwhile and is very easy do do (check out www.macsales.com/ for compatible SSD and additional memory).

I have a 2012 MBA running Sierra 10.12.3 Beta with 8GB memory and a 500 GB SSD. Works like a charm with all sorts of development stuff installed - Xcode, Macports, XAMPP, VirtualBox (often running Win 7/10 or various Linux versions), etc. I have set up an INDI server on my spare PI yet, but its on my list!
The topic has been locked.
3 years 8 months ago
Offline

Posts: 5
Less More
Thank you received: 0
Ekos on Mac OS X ? #13375
I just bought the same camera and an Orion 50mm guidescope. Also picked up a Fuji X-M1 camera on EBay that I am going to try for astrophotography. It has an APS-C sensor but uses a Fuji's X-Trans color filter array rather than the usual Bayer array( www.dpreview.com/reviews/fujifilm-x-e1/3 ). Also produces different .raf raw files. I plan on converting to full spectrum.

So I am one step nearer to launching into the INDI world!
The topic has been locked.
3 years 8 months ago
Offline

Posts: 2269
Karma: 22
Less More
Thank you received: 663
Ekos on Mac OS X ? #13386
I have the same guidescope! I have been trying to get it to perform as well or better than my Short Tube 80 because that scope did not really fit on the side of my new 6 inch f/4. It caused balance issues that I couldn't resolve easily. So I have been trying the mini guide scope with my setup. I wasn't getting great results, so I am trying a better guide camera. This is part of the reason for the lack of progress recently on KSTars/Ekos on OS X. It is mostly working great, the main problem now is with the distribution end, so there is less of an incentive to work on it, so for me at least, I have also been doing other things.
The topic has been locked.
3 years 8 months ago
Offline

Posts: 15
Less More
Thank you received: 2
Ekos on Mac OS X ? #13393
I have been using a finder-style guidescope for several years, right now it's an Orion SSAG with a Kwiq Guider on an otherwise stock 9x50 finder. I also picked up the Orion 50mm Guidescope to use with a QHY 5 II L, but haven't swapped it out yet.

Essentially, I figure as long as the guider is running at a better resolution in "/px than the main scope, you're golden, especially when you figure in subpixel guiding.

I get great results with the combo, guiding the mount to within 1" most nights, or 2" if it's real windy. Best guider ever.
The topic has been locked.
3 years 8 months ago
Offline

Posts: 2269
Karma: 22
Less More
Thank you received: 663
Ekos on Mac OS X ? #13395
Yes, I agree. That is why my DSI was just not good with the smaller guidescope. Since the 50mm guidescope has a focal length of 162 mm, that gave the DSI about 10" per pixel. My telescope is a 6 inch f/4, giving it a short focal length of 610 mm, but with my SBIG 8300M, the resolution is 2" per pixel. The DSI was just not a good match. the ASI gives me about 4"/pixel on that guide scope , which is much closer to the imaging camera. And as you said, with the sub pixel guiding and the fact that the seeing is usually not much better than that anyway, I think it will work well.
The topic has been locked.
3 years 8 months ago 3 years 8 months ago by Adam.
Offline

Posts: 82
Less More
Thank you received: 9
Ekos on Mac OS X ? #13403
Hi all,
it seems that there is something wrong with recent builds of KStars on macOS. It builds just fine but the KStars app doesn't start. When started from the terminal, it never gets past the "Welcome to KStars 2.7.2" message. It even shows Rob's directory copy and astrometry.net dialogs but hangs afterwards.
I tried with the homebrew method as well as with the craft method on two different Macbooks but the result is always the same.
Has anyone of you tried to build KStars recently and noticed something similar?

Posts: 2269
Karma: 22
Less More
Thank you received: 663
Ekos on Mac OS X ? #13409
Ok good, I was going to say. . I ran the craft method 2 days ago and I have been using the version of KStars that it made for the last 2 days on my MacBook Pro with no problems.
The topic has been locked.
3 years 8 months ago 3 years 8 months ago by rlancaste.
Offline

Posts: 2269
Karma: 22
Less More
Thank you received: 663
Ekos on Mac OS X ? #13665
This afternoon, I finally got around to tackling this problem with the kstars image on the DMG crashing when it takes a photo. As I mentioned before, when I tested it on my wife's non development laptop, I was getting something that said "illegal instruction: 4," which apparently means a command that the processor does not understand. So then I got my old Mac laptop, which I have been cleaning out and getting ready to wipe clean. I ran Jamie's script on that computer and got a nice dmg. Then when I tested the DMG on my wife's computer it did not work, but when running it from the command line, I found a clue as to why. It said it couldn't find some dylib files, specifically libcfitsio.dylib and libnova.dylib. It was looking for libcfitsio.dylib in Frameworks. I looked there and it was missing! Then it was looking for libnova in the executable path (not in frameworks??) and it of course was not there. So then I manually copied those files into the app in the spots it was looking for them and it worked! Then I tried running the Indi server and it did not work, but I played around a little and finally found out that it wanted libnova.dylib and maybe libcfitsio.dylib in the Indi folder. So I copied them in there too. And low and behold, it worked!!!!

I then copied the app to 3 different Macs, and they all could run the simulator telescope, the simulator ccd, and the simulator focuser!!!!! One was Sierra, one was El Capitan, and the 3rd was my wife's El Capitan machine which doesn't have any QT, homebrew, or command line tools installed.

I have not yet tested this with real equipment on a machine that did not compile it, but I am very hopeful! I am attaching a link to the zip file containing the working app. It is not a dmg, since we will have to find out why those files were not copied by Jamie's script and we should figure out why the Sierra build gives an illegal instruction error when running on an El Capitan machine.

Please test this out!! drive.google.com/file/d/0B_ivMJINsdQ8NTl...N0E/view?usp=sharing

Note that I haven't tested everything yet, such as the download new data, nor have I looked into whether xplanet is running properly, but this is a huge leap forward!
The topic has been locked.
Forum
/
INDI Library
/
General
/
Ekos
/
Ekos on Mac OS X ?
Time to create page: 0.595 seconds
Powered by Kunena Forum
© 2003-2020 by INDI Library. All rights reserved.