Ekos has always been designed from the start as a Deep Sky Astrophotography Tool. Streaming & Recording capabilities were added but are not quite sufficient. Now, Ekos will unlikely grow to be a fully fledged planetary imaging program, but I thought I'll try to improve things a little bit in next KStars release.

Below is a preliminary SKETCH (not even a mockup) of the kind of controls I envision to be in Ekos. Left are controls, right is the video stream and below that (white box) is the live histogram. Is there anything critical missing from this picture? I'll add "Extra Settings" button that would popup INDI COntrol Panel. 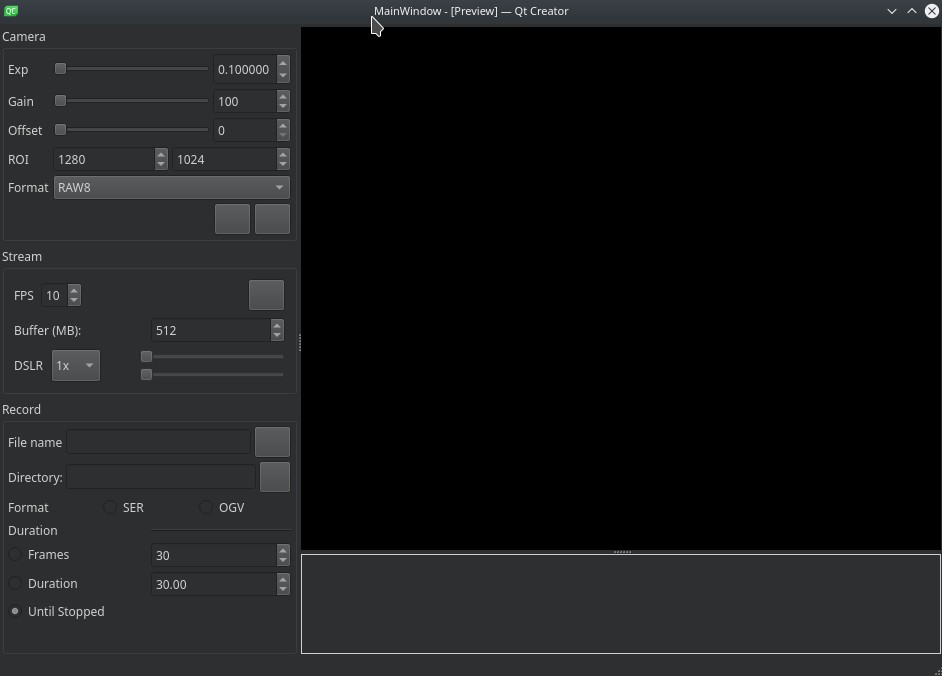 Jasem Mutlaq
Support INDI & Ekos; Get StellarMate Astrophotography Gadget.
How to Submit Logs when you have problems?
Add your observatory info
The following user(s) said Thank You: Jim, jiberjaber, Collin
2 years 3 days ago #63733

It would be nice to have buttons for focus in and focus out, and maybe focus step size.

I just completed a set of planetary imaging sessions (Mars, Neptune, Uranus) with KStars / Indi, but I used AstroDMx Capture to control an SVBony SV305. To be honest, I really liked AstroDMx Capture because I found many tools helpful with the (somewhat specialized) needs of very high magnification planetary imaging (lucky imaging) -- for both super bright targets (Mars) and relatively dim targets (Neptune). It would not be a bad tool to study in this regard.

Using a combination of KStars / Indi (with a carefully aligned guide camera) along with AstroDMx was helpful... because I could quickly slew (and plate solve) with the guide camera... and then launch AstroDMx Capture ... and (critically) use the mount controls in Indi to make fine adjustments to center the planet.

1) The ability to define a region of interest and then slide the ROI around across the full frame (at high magnification, planet can drift)
2) The ability to easily adjust exposure time / frame rate -- and move easily between a few categories (tens of seconds, seconds and ms). I found myself at times using very long exposures (tens of seconds) to get the "glow" of the planet... which helped me find the planet when off by just a bit at very high magnification. Once the planet is in view, I'd quickly move to a typical video frame rate.
3) Ability to adjust gain quickly / easily.
4) The ability to easily import resulting SER files into the usual cast of post-processing software (pipp, autostakkert, registax). Please test this. The files from the current video recording capability in Indi today (I found) were a bit hit or miss (some worked, some had issues... no clear reason why).
5) The ability to put a reticle on the field of view (centered)
6) The ability to configure viewing (brightness / contrast) separate from capture (because viewing the planet for capture may need different settings than desirable for capture...depends on screen brightness, etc.).
7) Information display wrt current frame rate (frames per second)

Maybe a button to launch the Xplanet solar system viewer with the current field of view? I'm weird, but I discovered this tool _after_ my planetary imaging session... and it is really very cool in aiding with understanding where the moons are at the moment... how the planet should appear at that moment, etc.

By the way... getting my guide camera lined up just so with the main planetary camera (with a 3X Barlow on an LX200 ... effectively 6000mm focal length at F30) is a pain. Life might be easier if Kstars / Indi could develop a mount model that could take into account the relative differences in pointing between a guide camera (guide telescope) and the main camera / telescope (assuming it were possible to do plate solving with both... would likely do an initial plate solve with the main camera at prime focus 'cause that's not happening at 6000mm at F30 w/ the Barlow installed). In that scenario... when plate solving with the guide telescope, Indi would know the difference in pointing between it and the main telescope and correct for that when slewing the mount into position. How cool would that be?!??

My alternative hardware solution that I'm considering is simply a flip mirror... with the guide camera at prime (for plate solving, slewing) and the main camera behind the Barlow after the mirror).
The following user(s) said Thank You: Andres Rossi
2 years 2 days ago #63780

Hi Jasem, maybe it would be helpful to add filters and filter wheel controls.
BTW, do you have a date to launch this planetary module?

There is no launch date, I didn't even start on it. Maybe this would make a good GSoC project.
Jasem Mutlaq
Support INDI & Ekos; Get StellarMate Astrophotography Gadget.
How to Submit Logs when you have problems?
Add your observatory info
The following user(s) said Thank You: Andres Rossi
1 year 1 week ago #78087

Please put in a histogram and some way to stretch it manually. I am doing solar work and the histogram is the most important tool
1 year 4 days ago #78204

+1 to histogram. Its essential to judge the right exposure levels.
I particularly like the planet profiles that Firecapture allows you to setup. Thats a nice one to have too.