Replied by Gonzothegreat on topic Post your INDI Setup!


if I was going to build V3, it would have a mini roll on roof on rails (similar to what you have in your drawers, but off course much stronger and weather resistant....)
I can actually modify this box for it if I really have too.
Kstars Mac osx
Odroid C4 / WO Redcat51 / CEM25p / ZWO533MC / QHY5L-II-M (OAG)

Replied by Leonard Bottleman on topic Post your INDI Setup!

My ROR observatory is about 50 meters from my house, and I have a Celestron Edge 1100HD mounted on a Losmandy Titan GEQ. The primary imaging camera is an ASI294MC Pro, and the OAG camera is an ASI174mini. The focuser is a Moonlite instruments with a stepper motor and controller.

The mount, cameras and focuser are all controlled by Indi from a small fan less Intel x64 based system connected to our LAN.

I go outside to open up the observatory, takeoff the scope's dust cap and put on the dew shield, after which I come back to the office and manage the evening's session from a more powerful x64 desktop system.

Both computers are running Mint Linux 18.3.

Here's a shot of the imagine train and mount:

I am using a mobile setup so I can either take images from my backyard or take my setup with me as I go observing visually with my 20" dob. I have a SkyWatcher HEQ5-Pro on which I have mounted a William Optics ZenithStar 71 ED with a modded Canon EOS 700D. The HEQ5-Pro is connected to my Lubuntu laptop using an EQDir cable. For guiding I use a ZWO ASI120MC-S (USB3) camera mounted on a TS finder. 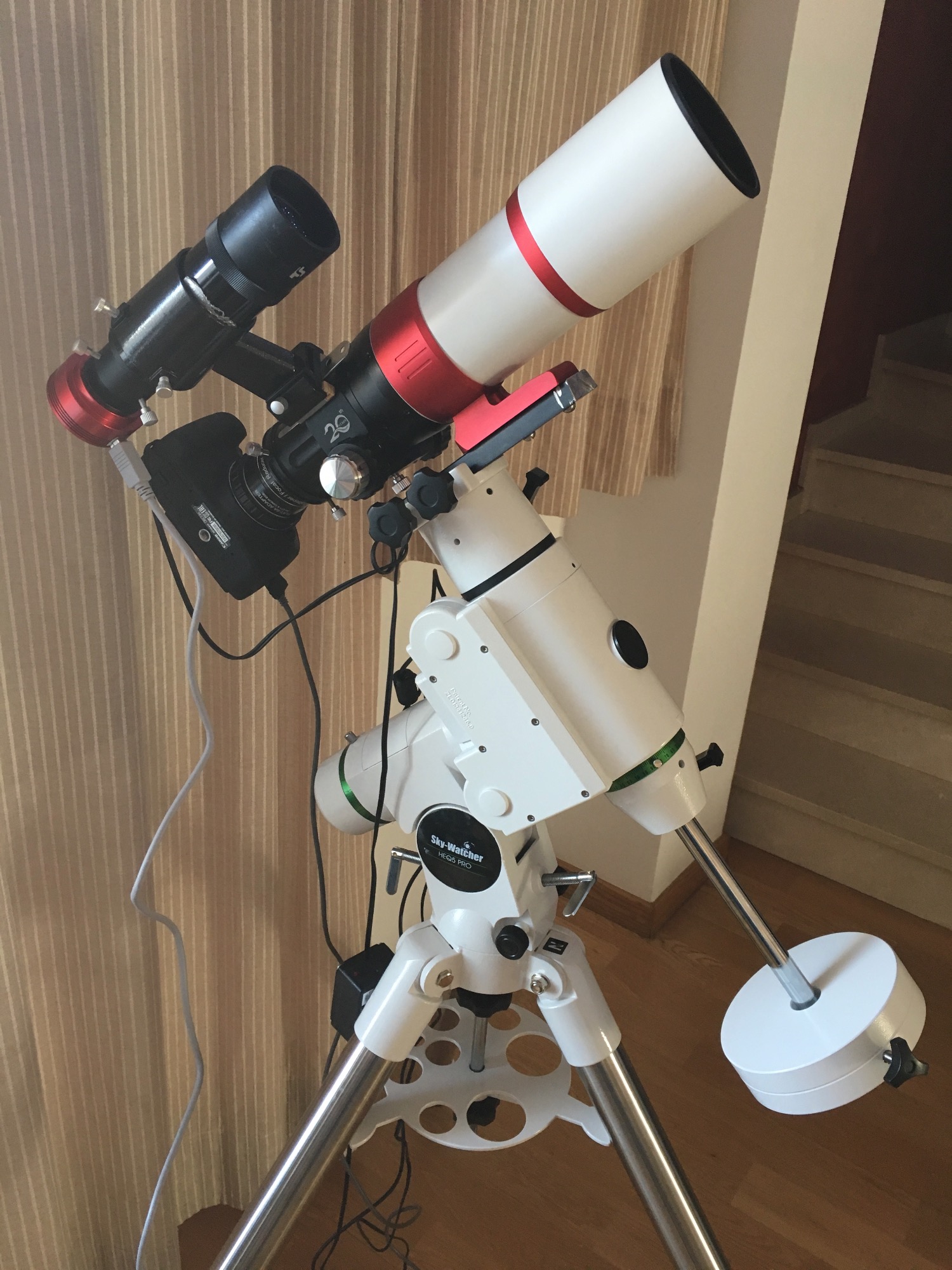 Replied by Chris Howard on topic Post your INDI Setup!

I have four different setups, all using INDI/Ekos, depending on what I'm targeting, and I'll swap imaging trains--Atik 414EX + ZWO EFW for narrowband, and ZWO ASI071MC for color. For wide-field, I use a 200mm Pentax/Takumar f/4 or a Nikon 180 f/2.8 lens. Most targets are somewhere in the middle, and so I do most of my imaging with the William Optics GT81 or ZS61, and for smaller/faraway objects (or moon/planetary) I use an Astro-Tech 6" f/9 RC. I have two EQ mounts, an Orion Atlas EQ-G and iOptron CEM25P.

My latest tinkering has been focused on mounting the Pi and battery on the scope so there are no cables to run anywhere. So far, with some daylight testing this all works flawlessly, but I don't think I'll be able to get away with piling on more batteries (especially with the more portable iOptron mount) so I can run the gear through the night with dew control and TEC on the Atik or ZWO cameras. The Orion Atlas would be fine with this, but I've been using it less over the last year.

I have also been working on a way to make it easy to setup my stuff on a semi-permanent "pier" I have in the backyard--see pics, and the tripod, so that I don't have to change anything if I'm shooting away from the house. I have my iOptron mount on a pier adapter that's bolted to a 1/2" aluminum plate that lines up with the aluminum plates on the pier and tripod. For the last year or so I've been able to set the fully loaded mount--scope and weights already balanced--on the pier, tighten things down, and I'm ready to go. (I live in New Hampshire, in a town with very few streetlights, and the light pollution isn't bad--my backyard is about Bortle 4, SQM: 20.62 mag/arcsec. I mainly travel with the gear in order to get better views of the low southern sky, but darker skies are always a plus). Replied by Ken Self on topic Post your INDI Setup!

Finally an INDI setup I'm happy with. This is the RC8 on the Avalon M-Uno mount with ASI1600MM-C imaging camera, ZWO 8-pos EFW, Optec TCFSi focuser and ASI120MM-S guide camera through TS-Optics OAG.
The main computer is the Aaeon-Up Core running Ubuntu 16.04 and can be seen on the second picture with its external Wifi antenna. Its USB3 port has a 10 port powered USB3 hub which everything connects to except the mount. In addition I can plug into the hub an Ethernet adapter and Displaylink adapter for troubleshooting if the Wifi has problems. Otherwise it runs wirelessly. I run PHD2 on this one using the native ZWO driver and a remote INDI Avalon driver.
The mount is driven from a Raspberry Pi3. The INDI server on the Aaeon connects wirelessly to the Pi3. It was initially located physically under the OTA but it has issues with Wifi there - possibly due to an earth loop. Located on the side of the mount it has no problems. It can also be connected to ethernet for troubleshooting but I cant get Displaylink to work on it. And in case of real problems I can always connect the mount to the Aaeon Up via the hub. But that adds one extra cable crossing from RA to Dec axis. I could have connected wirelessly to the Avalon but so far I've found excessive latency going that route. If I had my time over I would have ordered the Avalon with the Bluetooth option rather than Wifi.
In my preferred setup the only cable is one 12V cable coming through the polarscope hole to the RA axis where it powers the mount and the Pi3. It then continues onto the dec axis to power the Aaeon-Up, USB hub, ASI1600 and Optec. The Aaeon-Up and Pi3 have UBEC voltage down converters to supply their 5V. As you can see it is still a work in progress with some tape holding the cable in place and a few unsecured cables
My next plan is to fit a slip ring into the polarscope hole so the power cable can rotate without twisting.
I also have a desktop computer in the observatory running Windows 10, Kstars and Ekos. All images are save locally to the Aaeon and I download them either through ethernet or with a USB stick. I'm currently experimenting with registering and stacking on the Aaeon-Up with Siril but its not working out just yet. So for now I'm sticking with DeepSkyStacker. 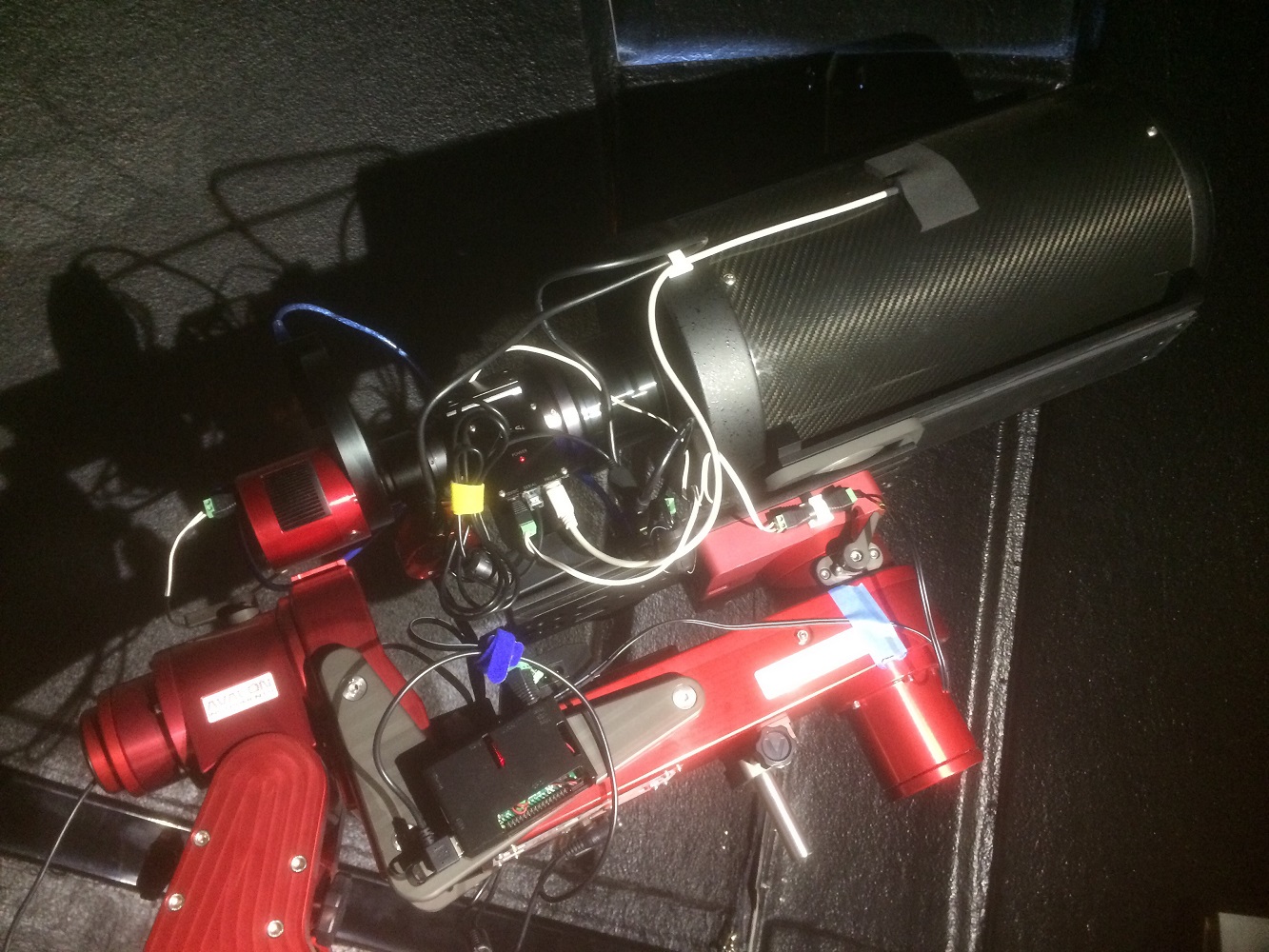 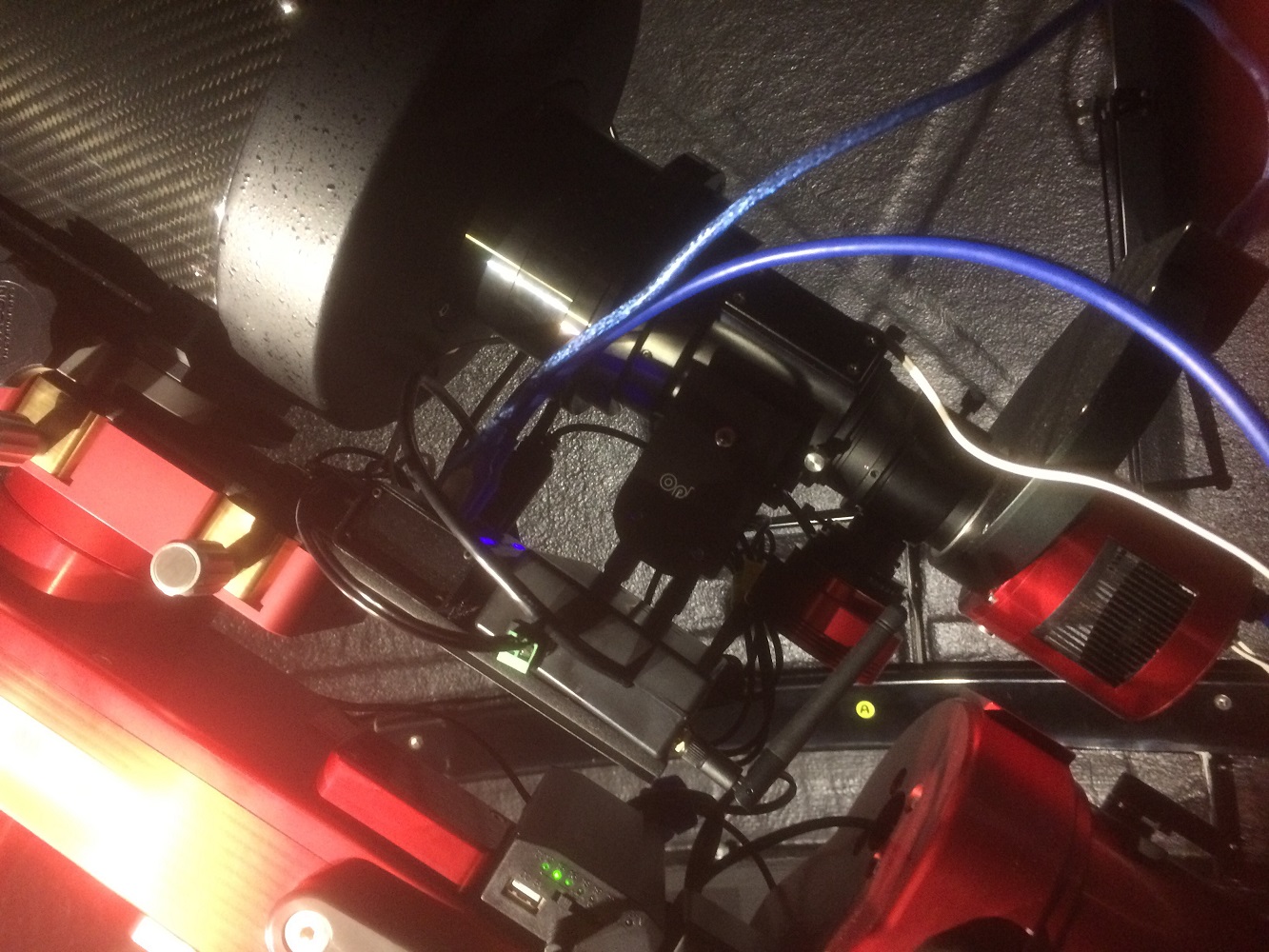 Replied by giorgio on topic Post your INDI Setup!

Here is my Indi setup. Indi is running under Stellarmate on a RPi 3b+. I installed the RPi inside a customized aluminium case fitted on a Vixen mini dovetail. it sits happily and lightly on the FSQ clamshell. I do not use a USB hub. Cables not displayed but they are all appropriately sized for this configuration

Replied by maxthebuilder on topic Post your INDI Setup!

Nice setup!
Hey, I have a question.... I have the same power bank and my RPI doesn't work with it - doesn't boot. I measured the voltage - it's 4.8V. So I use a different power bank (smaller) to power RPI and use THAT bank to power the mount (12V) and the camera ("5V").
Did you modify the bank or I am just unlucky to have a low voltage one?
Thanks!
Max
Max S.

Replied by giorgio on topic Post your INDI Setup!

Hi Max, I’m not sure if you’re replying to my post, but in case you’re here’s my reply.
The Rigrunner is only a 12v and 5v (usb) power distributor, my whole setup is powered by a 13Amp Meanwell switching power supply that I fitted inside a weatherproof box. Having said so, maybe your undervoltage at the USB port is caused by a not so adequate power supply or battery?
Please note that the length and the gauge of the cable from the power supply to the rig runner might be cause of voltage issues.
The following user(s) said Thank You: Craig
Last edit: 2 years 11 months ago by giorgio.
2 years 11 months ago #32416

Replied by maxthebuilder on topic Post your INDI Setup!

Sorry, I should've quoted... That was @ ChrisHoward...
Yes, exactly, the power bank, while big in size, is under-volted - only 4.8V before any cables.
Chris has the same bank and powers his RPI from it.
Maybe I got a bad unit.

Replied by Chris Howard on topic Post your INDI Setup!

Sorry for the delay in responding!
I did run the Raspberry Pi 3b off the USB from the power bank--without any apparent problems. I think I just assumed the 5v side would work, and never checked the voltage. The Pi started up and functioned normally. With my test I was mainly focused on the 12v side and used the boost to keep that somewhat stable.
2 years 11 months ago #32977

Replied by Andrew Burwell on topic Post your INDI Setup! 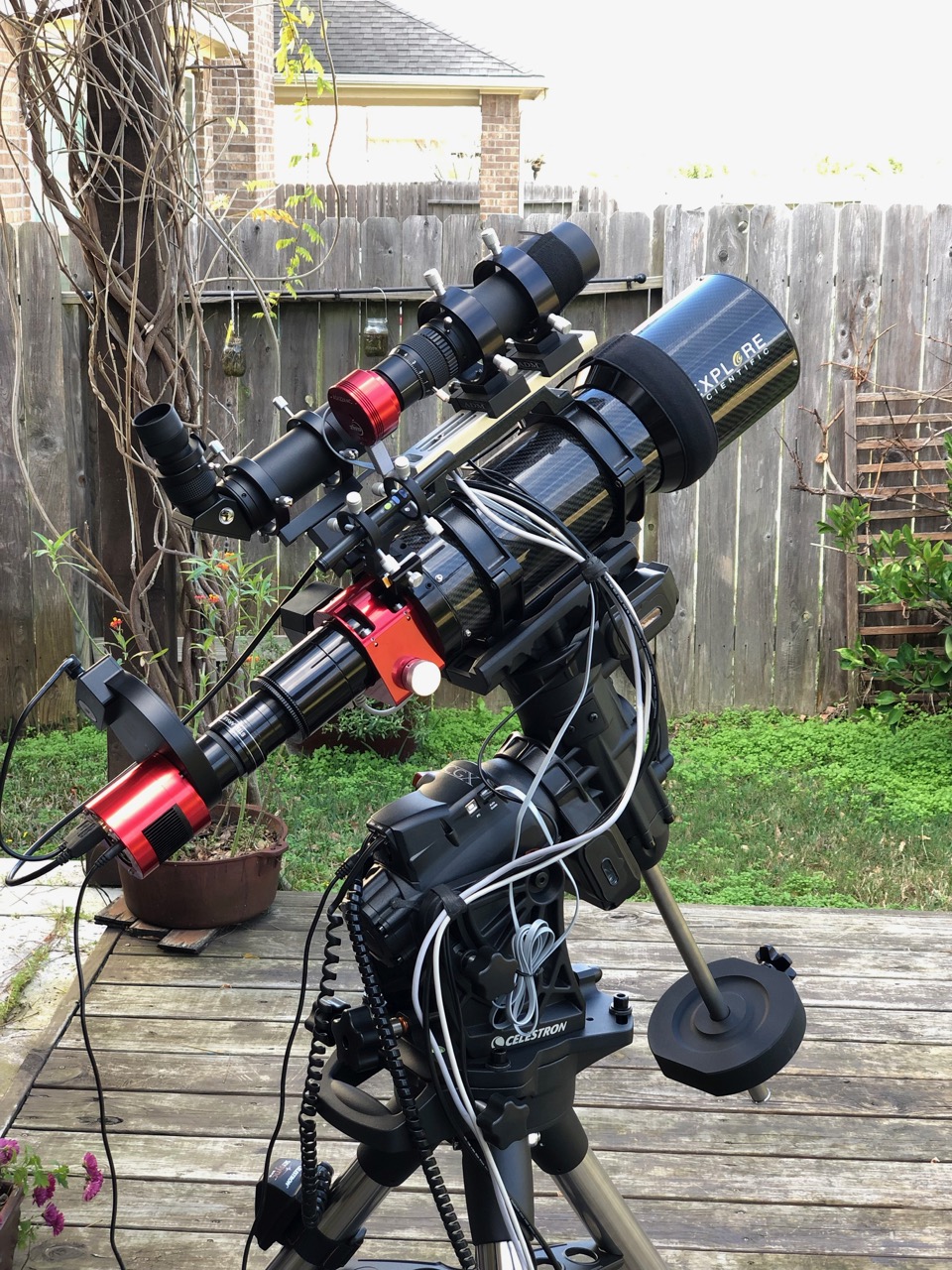 -Andrew
––––––––––
Mac Observatory - All about using the Mac for Astrophotography: www.macobservatory.com
Astrobin: www.astrobin.com/users/Lead_Weight/
The following user(s) said Thank You: Brian
2 years 11 months ago #33035

Almost at the top of this page you can see my setup as it was about a year ago. Meanwhile there have been several changes to my INDI setup, so here's what's new.

The William Optics ZS 71 ED still is going strong, as are the SkyWatcher HEQ5-Pro and Canon EOS 700D. However, I have installed an Astronomik L-3 filter to reduce the glare of blue stars. I have also made sure that the guide scope is centered more on the telescope tube so its point of gravity is aligned with the hour axis of the mount. Guiding still is done with an ASI120MC-S camera mounted on a 50 mm F=160 mm finder scope. Finally I replaced the SkyWatcher tripod with a Berlebach tripod. The setup now is much more compact and still very stable. KStars/Ekos 3.0.0 run on an N34 mini pc running Ubuntu 18.04.

Then I bought a TS 8" Ritchey-Chrétien telescope which I have mounted on a SkyWatcher EQ6-R and another Berlebach tripod. Imaging is done with an ASI1600MM-C Pro with a ZWO EFW filter wheel and Astronomik L-!, Red, Green and Blue filters. I'll probably add an H-Alpha filter at some point in time as well and then the filter wheel will be full. I also installed a TS 0.67x focal reducer so the system is F/5.4 with a FOV of 62x48 arc minutes. Guiding also is done with an ASI120MC-S but this one is mounted on a 60 mm F=280 mm ZWO guide scope. KStars/Ekos 3.0.0 run on an Odroid-XU4 running Ubuntu 18.04.

Here are my two babies in my backyard near Madrid, Spain, after a hard night of imaging. Well, hard for them because I was sleeping 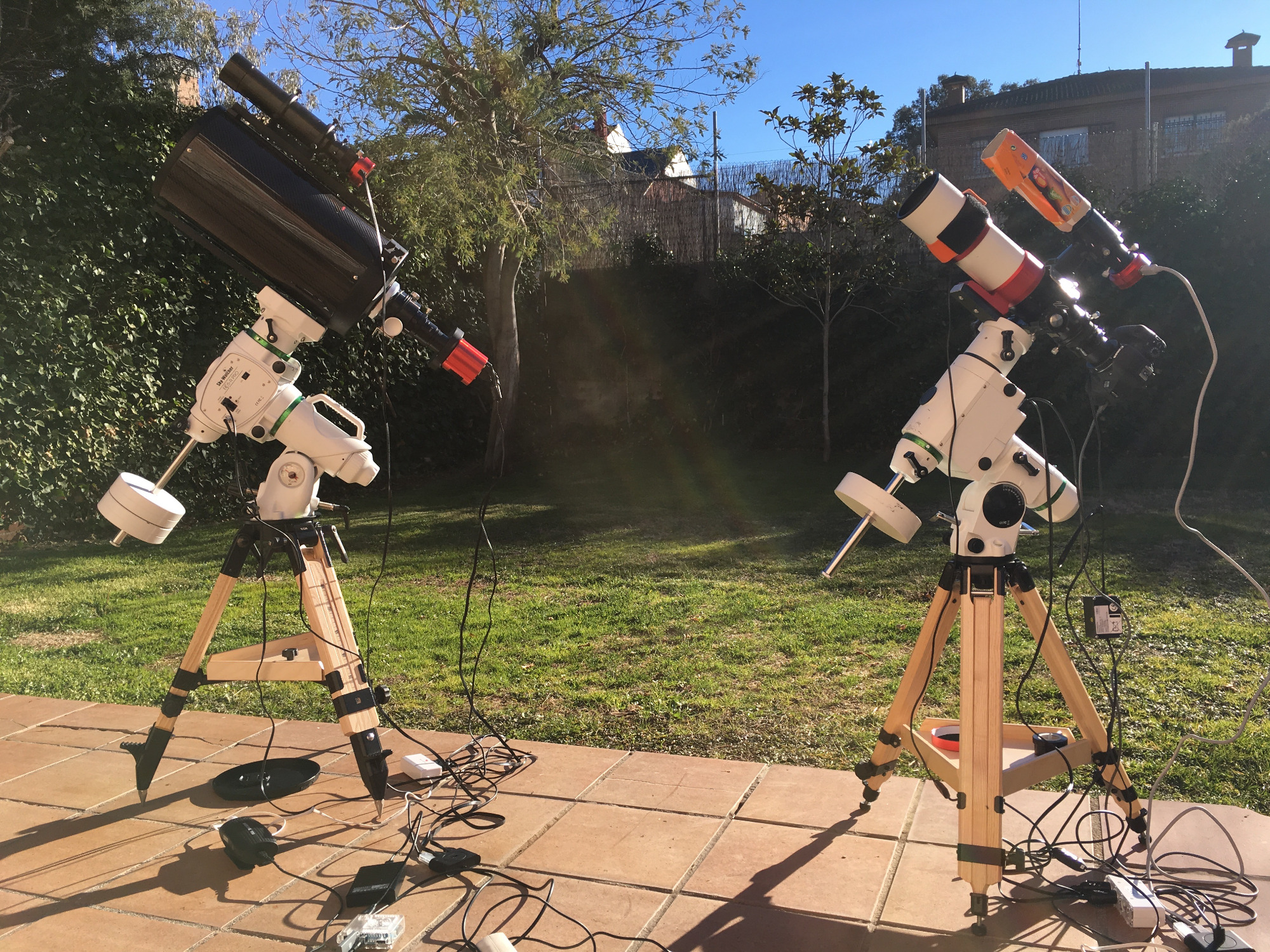