Announcing a new Scheduling Algorithm was created by Hy Murveit

I've recently submitted an Ekos change that will allow you to choose a new scheme for scheduling jobs. (In the nightly release) there should now be a scheduling algorithm choice. If you set it to "Classic" (the default), nothing has changed. If you set it to "Greedy" you will see the changes described below.  Note: these changes concern scheduling--deciding which jobs run and when. They do not affect the job management aspects of the scheduler which remain unchanged.

In both the Classic and Greedy schedulers, jobs are listed as "earlier on the job list means higher priority". With the Classic scheduler, priority** is of the highest importance. It will not schedule a lower priority job until the higher priority job is done, even if that job takes several nights, and even if the higher-priority job cannot run at the current time, e.g. due to altitude/terrain/etc.  In contrast to this, the Greedy scheduler attempts to keep Ekos busy as much as possible. Although it gives priority to earlier-listed-jobs, it will run later-listed ones if the earlier one can't run. Of course, the lower priority job will get preempted when the high-priority job can finally start to run.

**In this discussion, "lower priority" means "further down on the job list". and similarly, higher priority is higher/earlier on the job list. We will be phasing out the priority number that can be assigned to jobs on the Classic scheduler.

Here's a recommended way to try this out. Let's assume you have a main target for which you want to collect as many images as possible. Set that target up as first on the scheduler list, have it start ASAP and set its completion condition as "Repeat Until Terminated". It should be scheduled to image whenever possible (even across multiple nights) until you turn off the scheduler or Ekos. Add several other targets as well, ones that you might also be interested in, and that can be imaged in other parts of the night. Make sure those are listed below the primary target on the jobs list. Set those the same way (ASAP/RepeatUntilTerminated). They will be scheduled to run whenever the primary target can't be imaged.  Of course, make sure the twilight restriction is set for all your targets. Altitude and terrain restrictions are important as well--if Ekos doesn't know that there's a tree or house blocking your target, it can't be smart about scheduling it.

Since jobs will be preempted/restarted more often with Greedy than with Classic, the "Remember Job Progress" option is now more important.  You can find this setting in the KStars Setting Menu --> Ekos --> Scheduler --> "Remember job progress".  This option only works if you are storing images on the same machine where the scheduler is running. You should enable "Remember Job Progress" with this scheduler to get the most benefit, assuming your capture sequences use multiple/different filters. If your capture sequences are just used with one type of filter/or OSC then it probably doesn't matter. (RememberJobProgress has also be updated a bit, and should now do a better job of picking up where the last attempt finished.)

Here is a screenshot of the scheduler running with this new scheme. Note that there are 4 jobs, and they are listed in order of precedence. You can see the next start times for each of the jobs on the scheduler table, and the highlighted (4th) job is the one currently running. A schedule for the next 48 hours is also printed in the log window at the bottom. 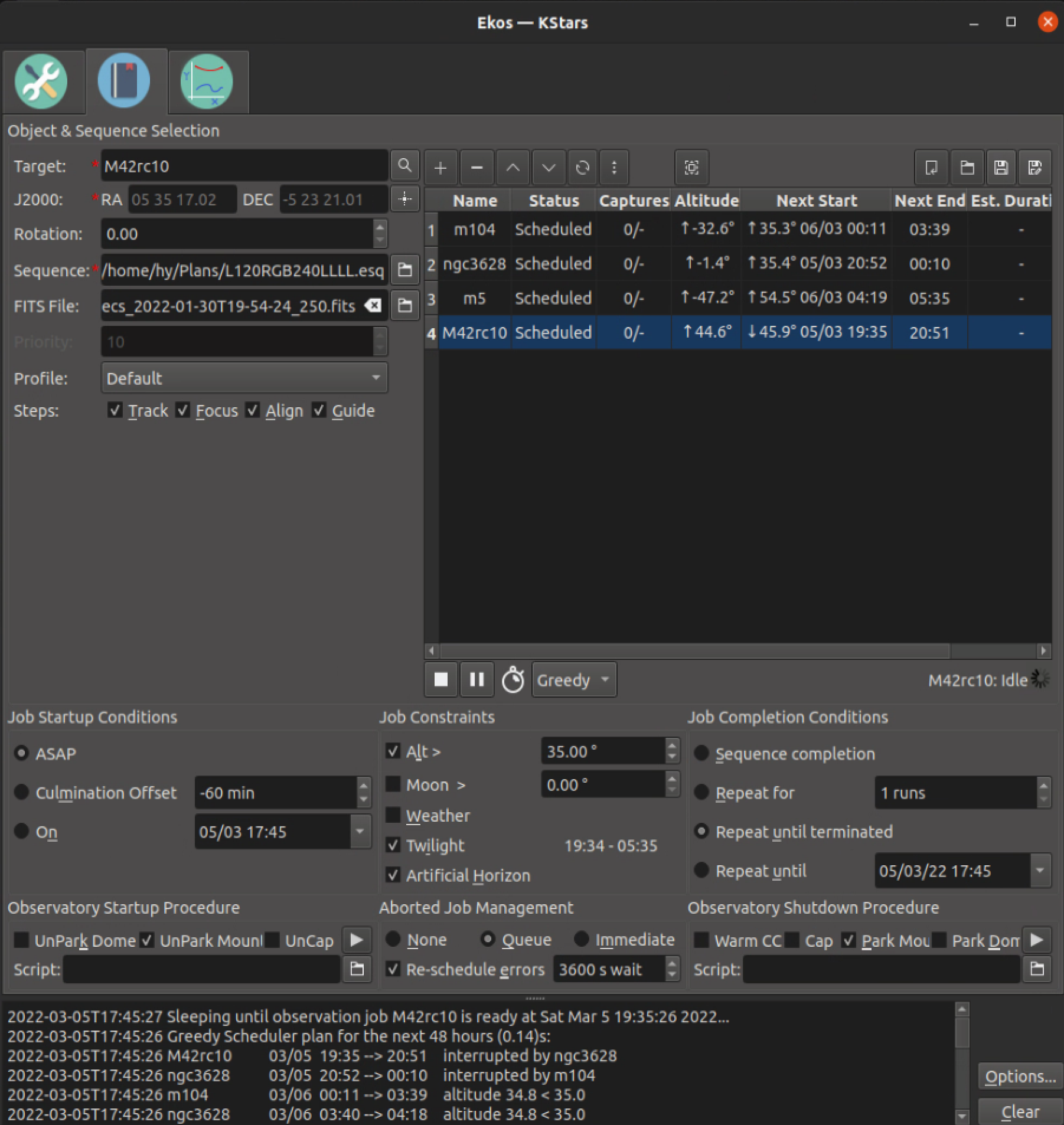 The scheduler is (minimally) integrated with Analyze.  During testing I let the Greedy Scheduler run for 3 days. Here's a screenshot of the Analyze timeline for the 3 days. (Note some timelines didn't display well because of screen resolution.)  The top line is the new scheduler timeline in Analyze. The different colors correspond to different jobs that were run, each one keeping its same color on different stars (yes, red is an unfortunate choice of colors and I've already submitted code that changes the color scheme for that line). You can see the different jobs ran as expected each night.

This new Greedy scheduler looks fantastic. Can't wait to try it.
I have one related question... I have a visual 360º terrain image of my backyard overlaid in the sky view. What is the current mechanism to make use of the alpha channel of that image to establish / use the altitude / terrain limits for the scheduler?

I just pulled the latest from master and tried it out. No joy!

The Scheduler has stopped working completely;
The moment I add a new target, it shows up with status "Complete". Clicking "Reset" does nothing. Starting the scheduler just reports that there are no jobs left in the queue.
Not being able to use it at all at the moment. Neither Classic or Greedy. To get your job to run you can do one of the following:
- uncheck and apply 'Remember Job Progress' (you may have to do something to get it to reschedule, like push play, not sure).
- Move the folder with all your images to a folder with a different name
- change your job to one of the other settings, e.g. Repeat for 2, or Repeat forever, ...

Thank you Hy! That did the trick!

I must say, the setting as a default setting seems a bit odd. Also it might be a good idea to tell a little more about why the behavior was as it was in the log - if it had said something about "Remember Job Progress" then I'd have gone digging in the settings.
But yeah, I must have forgotten it since I think that's the first thing I've always turned off after a fresh install and then forgot completely about its existence

There are two steps involved.

Step 1: You add the terrain 360-degree image and make sure it's pretty well aligned with the actual view from your telescope. It sounds like you've already done this.

Step 2: The scheduler doesn't automatically get the info from the alpha channel--perhaps it should. However, there is a manual step to give it that information. In the KStars main (SkyMap) window,  go to the Settings menu, and click on "Artificial Horizon". There is a process from there to click on the sky map and add points to a series of line segments that define artificial horizons. It isn't too onerous, given that you already have the overlay with terrain picture.  You can have/enable more than one artificial horizon. Make sure that one or more are enabled/checked, and hit apply.

Now, the scheduler should be aware of these, and you should see that in your Greedy plan. You may need to trigger a re-plan to see it (e.g. by moving a job up and down, etc). The replan thing shouldn't be a worry in real production as it replans on start, and checks jobs each second, and replans on preemption, etc etc.

Here's a pic of the interface for the manual clicking on the SkyMap.
Hy 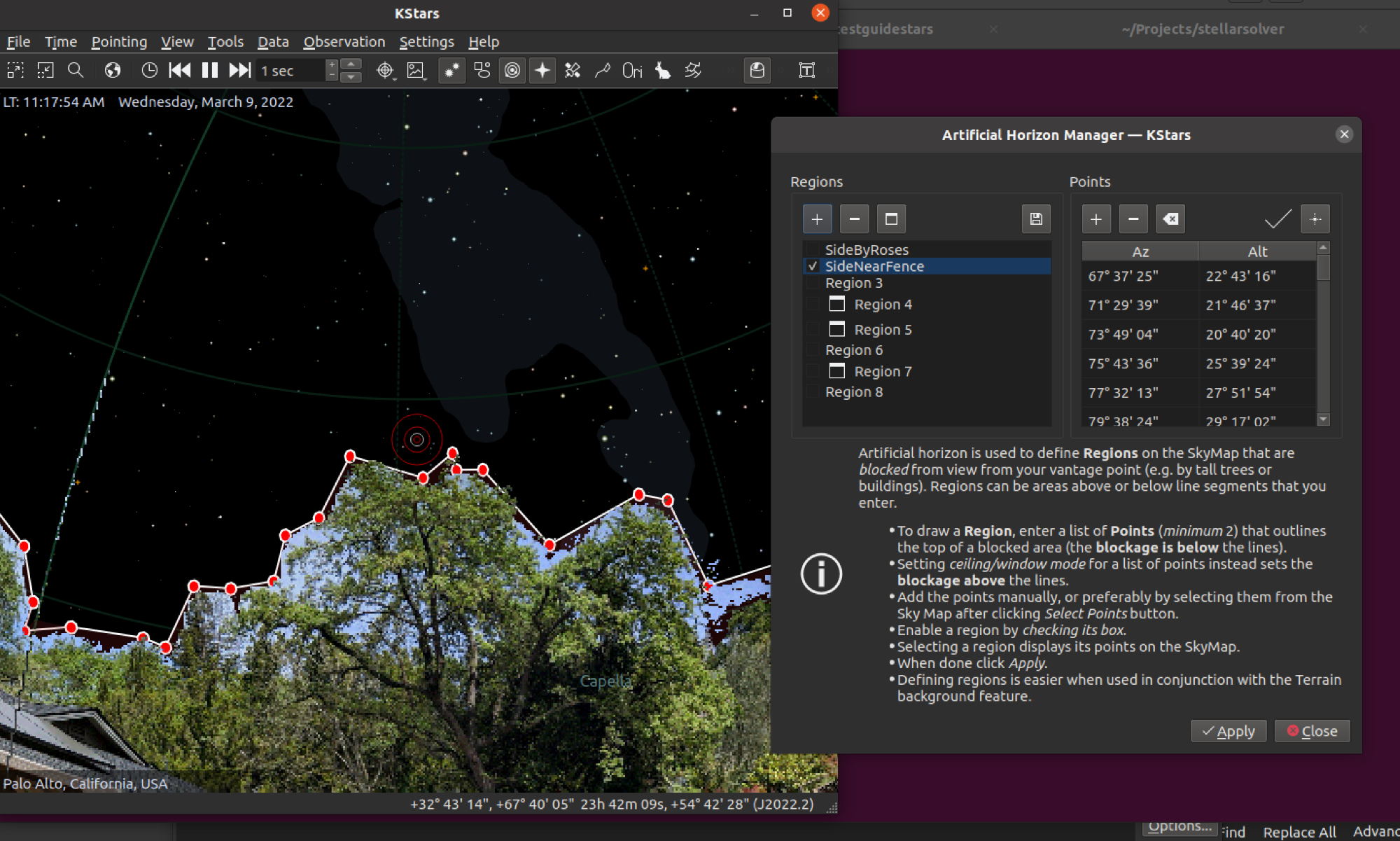 Since you are an early tester, and it's the first thing you ran into, it seems that we should find a way to alert users about this. What do you think the system should do?  Clearly there are cases where the behaviour is right and the job should not be run because it is completed.

Should 'Remember Job Progress' be promoted to appear on the scheduler page? Should there be a popup when all jobs are completed and the user hits play, suggesting he look at this? ...

It might not be a bad idea to promote 'Remember Job Progress' to the scheduler page. It is after all a setting that affects the scheduler behavior in a big way. Also if possible, if there is a reasonably sensible way to detect the situation it might be a good idea to write to the log something like "Job '[x]': All images [number of images] were found in the target directory, nothing to do. Job progress is considered complete (Remember Job Progress is enabled)". Not sure if there's a need for a popup, although I suppose it might not be a bad idea either? In any case by instinct I immediately looked at the log to figure out what was going on, but in my case it didn't help.
Watney Astrometric Engine
watney-astrometry.net
github.com/Jusas/WatneyAstrometry

Thanks. FWIW, there is plenty (perhaps too much) log spam related to this, though it probably doesn't mention 'Remember Job Progress'.
Look for lines with the words "completed its sequence" in them.
See: invent.kde.org/education/kstars/-/blob/m.../scheduler.cpp#L5772
Of course, you'd need to have logging enabled for the scheduler.

Replied by AstroMuni on topic Announcing a new Scheduling Algorithm

Thats great news @Hy. As you mentioned that this is minimally integrated with Analyse, are there any improvements in this release for figuring out progress of images stored in Remote folders? Reason is that I notice that Analyse is aware of the number of images taken but Scheduler wasnt and continued taking images past the target number.

@AstroMuni It wouldn't be hard for the scheduler to keep track of what has been captured in the current Ekos session, which is basically what Analyze is doing. The issue is, though, that Remember Job Progress keeps track of all sessions by looking at the files captured. That is, if you ran you job using Ekos/Scheduler the past 3 nights, but turned off your computer during the daytime and restarted Ekos at night, the current scheme still knows about all those past captures and balances the captures appropriately.

What would be needed to implement this where images aren't stored on the scheduler/Ekos machine is some kind of persistent storage to keep that information (and some way for the user to reset that, if desired). The persistent storage now is the filesystem itself.

I suppose I could test if the images are being stored locally, and if not, then just keep track of the current Ekos sessions' captures. Not as good as "all the captures", but better than nothing. Do you have an alternate approach/suggestion?

Thanks for this -- a huge improvement that greatly simplifies multi-target multi-night imaging!

Also thank you for your clarification about the terrain imagery and artificial horizon data being independent and unaware of one another. I hadn't realized that and had wondered why my terrain had no effect on my scheduled imaging. All fixed now!
8 months 3 weeks ago #81328