Trying to understand time, RPi, GPS with a CEM-60 when off-Internet

My setup is working pretty great overall, I must say. But there are issues with time that really slow me down when I operate without Internet and first turn on the system.

At my dark sky site there is no Internet, so when the Raspberry Pi starts up, the time is completely wrong. If I don't remember to fix this before starting the INDI server, I am guaranteed 30 minutes of wasted time, because the mount time gets set from the RPi (why?) and all pointing is wrong. Obviously, the solution is to manually set the RPi time. I view this as a work-around though, because the mount has GPS and should be considered the time reference - it *has* to be more accurate than me fat-fingering in the system time to the RPi.

So my main question is: can I get INDI and EKOS to use the mount's GPS as reference for time?

I see in the INDI Control Panel, "iOptron CEM60", "Mount Info" tab, it says GPS "Data OK", Time Source "GPS". That's what is says now, back home and connected to the Internet where everything works fine. I do not know what this tab says when off-network; presumably the same.

Under the INDI "Options" tab, it lists the GPS device as a "Snoop device", using the "GPS Simulator". Is there some way I can set this to use the mount GPS? The setting field is just a text string, so I have no idea what to enter if this is the right fix.

Unfortunately, no log files - was busy trying to take advantage of the sky, and it was very cold.

My setup is a CEM60 mount, Raspberry Pi running latest INDI, kstars was not the latest but was recent (September)... let me know if I've left anything out.

1 year 4 months ago
Away

Posts: 849
Karma: 3
Less More
Thank you received: 155
Trying to understand time, RPi, GPS with a CEM-60 when off-Internet #33150
It might be possible to snoop on the mount driver for it's GPS data. You can change that by entering the driver name in the box to the right and click Set (you may have to expand the window width to see it)
But I think there is a better avenue available to you with your GPS enabled mount/handset. There are options pertaining to what is used for time & location in EKOS>Options>INDI 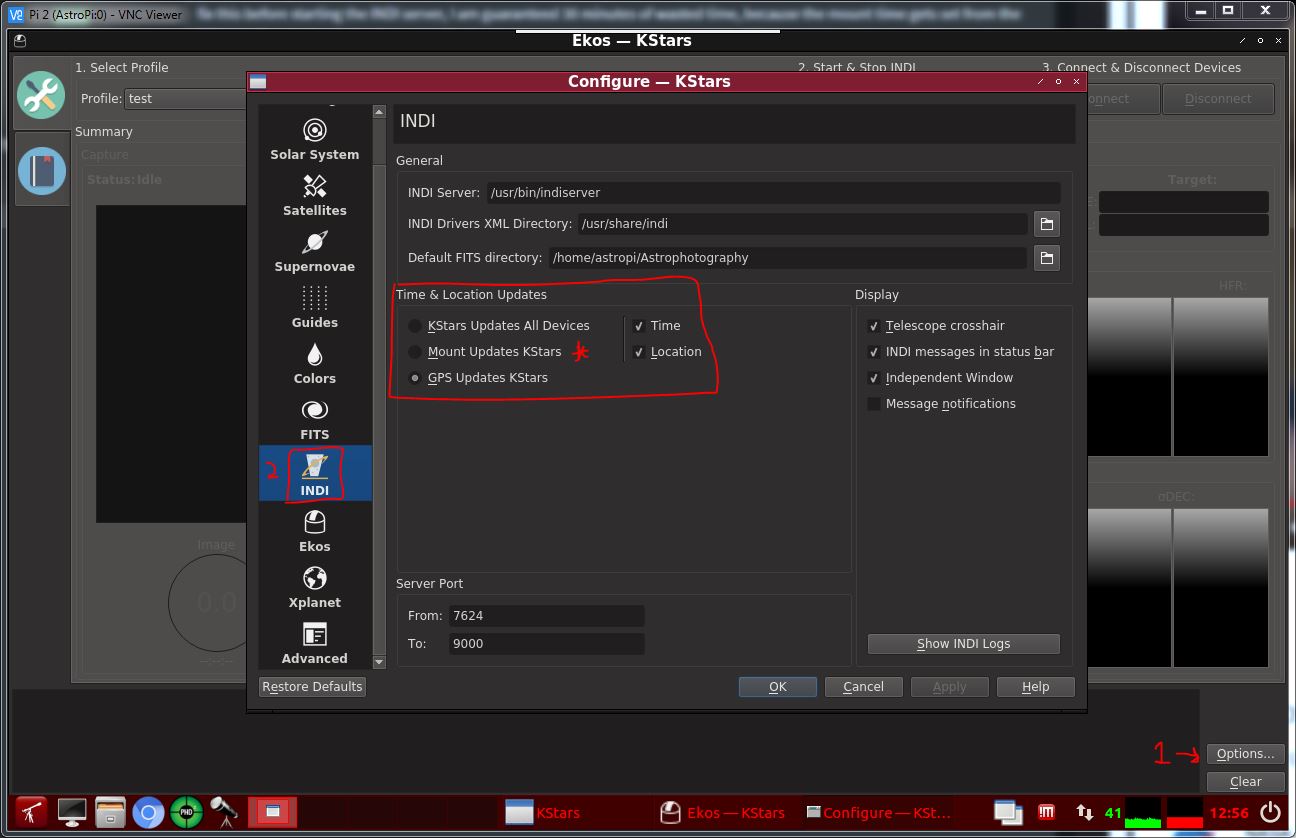 Posts: 88
Less More
Thank you received: 8
Topic Author
Trying to understand time, RPi, GPS with a CEM-60 when off-Internet #33152
Thanks! I had forgotten about that configuration box. This will be a huge help.