Posts: 54
Karma: 1
Less More
Thank you received: 12
Topic Author
Artificial Horizon hiccups #44407
I'm in KStars Build: 2019-10-03T08:23:19Z on my desktop right now. On my laptop (build in signature, more frequently used), I have my artifical horizon functioning just fine. I can't save it, however, because I get the wonderful invalid polygon error. I surely must have succeeded in the first place with it by luck, because I can't recreate it in my desktop without getting the invalid error, whether by manually typing out the points or drawing it, or even drawing some random would-be restricted area.

When I try to create another one on my laptop, it doesn't even mind that my new drawing is probably going to fail, it's concerned with the old polygon name (which displays perfectly and doesn't touch the horizon at all, nor does it end with a zero, it only begins with a zero in the altitude).

Further, when I was typing in some of the points, for instance I could type "39" and then hit space- the cursor would not advance for two lines of points and only in altitude (azimuth was fine with spacebar), but on the third it went back to normal behavior. I saw this in the laptop as well, when I first attempted to type them in, then succeeded by drawing.


Now I don't know if the whole "first and last points must be on the horizon" just happens to be required to allow the function to exist, but I'm drawing the thing in the first place because I don't see a horizon where my scope stands, at all, and I'm even further restricted by trees and buildings, so of course that requirement was odd in my perspective from the beginning, but there must be some way by which that requirement can be ousted? I mean, my art.horiz which is actually working doesn't come close to the horizon, so why require two points to be as such? I'm sure it's technical, so I assure you the question is rhetorical.

I didn't find a video on the process, but I think it would be a quick and valuable addition to the tutorial video lineup. The KStars Handbook (pg.48 of who knows what version- could use a version/date on the first page) directions for art.horiz doesn't really reflect the issues I have personally seen with the tool, and so I've listed them here.

Tired and a little cranky (probably much of the moon and cloud effects), but thought it useful to list out the issues I've seen with this tool over the past week. Can I even incorporate it into Ekos? I don't think so, and if not, consider it a point on the wishlist for sure.

The cool thing is, I somehow have it working on the machine I use the most- I don't know how. The lame thing is, I can't do anything else with it or duplicate it or further understand it.

Posts: 125
Karma: 1
Less More
Thank you received: 23
Artificial Horizon hiccups #44410
Hi Jacob,
I also have had this exact problem in the past. I have 1 machine where it works well (Odroid running ubuntu) but I have failed to get it to work on Windows PC running KStars. Like you, the invalid polygon error message pops up despite the data points being exactly the same as the one that works. I gave up on it 6 months ago so have not checked again if it has been fixed. It would also be nice to have some way to transfer the point or the model between machines to save the time taken to add each point manually.
Hopefully someone who has cracked this will reply

Posts: 186
Less More
Thank you received: 47
Artificial Horizon hiccups #44455
I usually follow 3 rules to get rid of the polygon error :
- enter the point manually, preferably every 5/10 deg AZ
- first and last point should be both Az=0 and alt=0
- Always draw the base of the polygon (see attached image).

I had another go and it all works. I had previously done exactly the process that you use and kept getting the error. Now it works!
Many thanks

Posts: 232
Karma: 1
Less More
Thank you received: 23
Artificial Horizon hiccups #44502
Is there a directionality to the polygon? I've created what it indicates is a correct polygon, but I assume that the coloured polygon in the centre of the screen represents the viewable area, but I would have expected it not to be shaded (less readable)

Is this the correct behaviour? 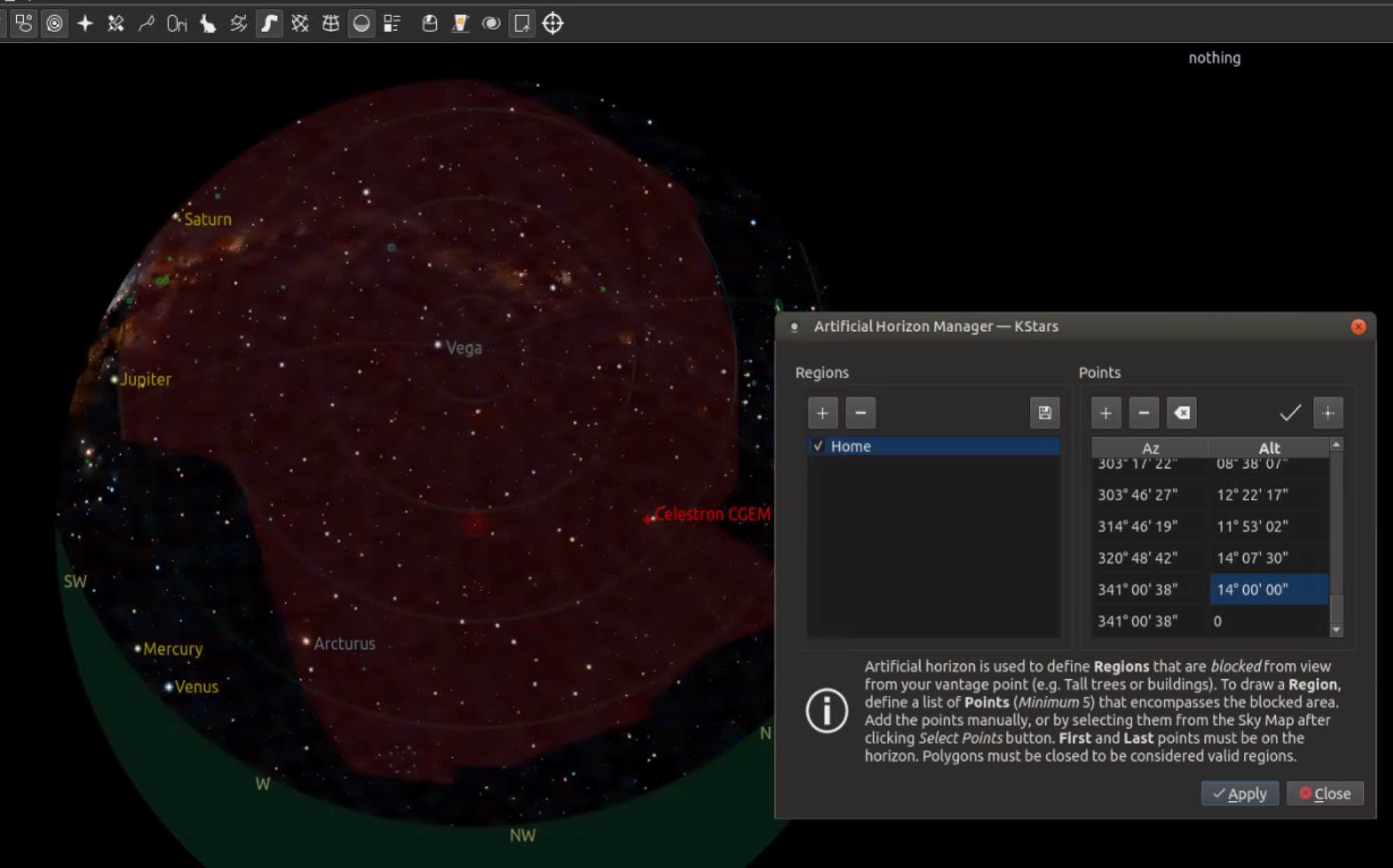 The shaded area on mine is the non viewable area.