2 months 3 weeks ago
Away

So this program is a work in progress. Yes, there are a lot of settings, but that is because this program is meant for testing what different settings will do so that we can see what is useful, what we can remove, what needs to be set to certain values, etc before I am done working on it. When it finally gets integrated into KStars, it should be simplified quite a bit. This program is a testbed, or a playground if you will.

One point of clarification. There are two different types of "inParallel." I know that is confusing, so I will need to clean that up before this gets integrated into KStars/Ekos.

First, there is the astrometry.net meaning of inParallel. That is loading the index files all at the same time and solving all at once, vs not inParallel which is loading the indexes one after the other while solving. If it can be done in parallel, that is definitely desirable, but if you don't have the RAM for it, you can't do it. Most of the profiles have inParallel turned on. But that is ok, because I added a check for the amount of memory available that automatically disables inParallel if you don't have the RAM to do it. You can just leave the setting alone and it should be fine. It is there right now, so that we can compare having it turned on or off.

Second, there is running processes in Parallel, as in multiple threads on multiple computer cores. A Raspberry PI has 4 cores and stands to gain quite a bit by processing in Parallel threads. In my profile editor, this is set with the "MultiAlgo" combo box. So if you want to try it, the "Parallel" solving profiles are already all set up to do this. In fact, I made an "AUTO" mode, which solves in parallel or doesn't solve in parallel as needed. That is what those profiles already use.


This did solve in SexySolver in 26 seconds giving it only scale numbers.
I then changed the solver to ASTAP and just re ran the solve, ASTAP failed after 304 seconds.

I did find the log file location in /tmp, I guess I need to turn off VERBOSE!

I also tried Classic Astrometry solver (with default options - except giving it scale). I also failed, but it skipped 408 objects because they were too big?

Posts: 303
Karma: 6
Less More
Thank you received: 83
New Internal Solver for Mac, Windows, and Linux -- Testing/ Experiments needed #54196
This image is better. Stars are round. ASTAP ignores oval star as galaxies. Still it has a lot hot pixels. To get it solved set in ASTAP a minimum star size of 4" or 3.5" See screen shot. Save the setting by pressing the solve button
Or add a dark(s ) and check "Calibrate prior solving"

The exposure of 6 seconds is fine but if it fails go to 10 seconds exposure or a little longer.

Please remove the G17 to force a selection of the G18.

Posts: 184
Less More
Thank you received: 2
New Internal Solver for Mac, Windows, and Linux -- Testing/ Experiments needed #54199
Han,
You must be using a later version of ASTAP, I don't have all those settings in my SIGMA page. My version dates from 11/2019. How do I just update ASTAP without fully re-installing? You also must be running ASTAP separately and not thru the Tester, as I cannot bring up the Sigma page from the Tester.

All,
I tried the ParallelSolving in SexySolver; three of the 'child' processes either did not solve or was aborted, but child solver #1 did solve successfully in 26 seconds on the latest image.
Ron

Posts: 2265
Karma: 22
Less More
Thank you received: 663
Topic Author
New Internal Solver for Mac, Windows, and Linux -- Testing/ Experiments needed #54200
Right, that is the way it is supposed to work. When very little about the image is known it is very effective.. It creates several child processes, each one trying different parameters. If one of them solves, it will abort the others and it will say they didn't solve. Some of them might also fail before the one that succeeds gets finished.

Posts: 184
Less More
Thank you received: 2
New Internal Solver for Mac, Windows, and Linux -- Testing/ Experiments needed #54202
Just a note that the index files for ASTAP (G17 and G18) are in the same directory as the program /opt/astap and they are not labeled as index files but as g17****** and g18*********, there does not seem to be a way to add these to the index file folder path. The Tester just says "No index files in Folder". I could put the G17 and G18 in different folders and then they could be used independently if the Tester recognized them. Right now to do that I need to run ASTAP totally separate from the Tester and call out which library I want to use.

I realize this is only a tester and this has nothing to do, necessarily, with how you integrate it into Kstars/Ekos. Just pointing out that to compare SexySolver to ASTAP I have to go out of the tester program.

Posts: 303
Karma: 6
Less More
Thank you received: 83
New Internal Solver for Mac, Windows, and Linux -- Testing/ Experiments needed #54209
ASTAP need the G17 or G18 files in the same directory as the program. The only exception is the Mac where they are located in the users directory. You can force using G18 in ASTAP but since you have limited disk space just remove the G17 files and it will use the G18 automatically. It's not an index but a star database containing only star positions.

I'm afraid the hot pixels will be always a problem with an uncooled sensor. See screenshot. Rob has to find a way to tune Sextractor to ignore them. Setting the minimum star size at 3.5 arc or 4 seconds is one way, but sometimes the hot pixels group together and they will be seen as a star. Longer exposures also help but probably the best option is to do a dark calibration prior to solving. Just select a dark(s) in ASTAP darks tab and check mark "calibrate prior to solving"

You can download the latest ASTAP 0.9.364 development version at: 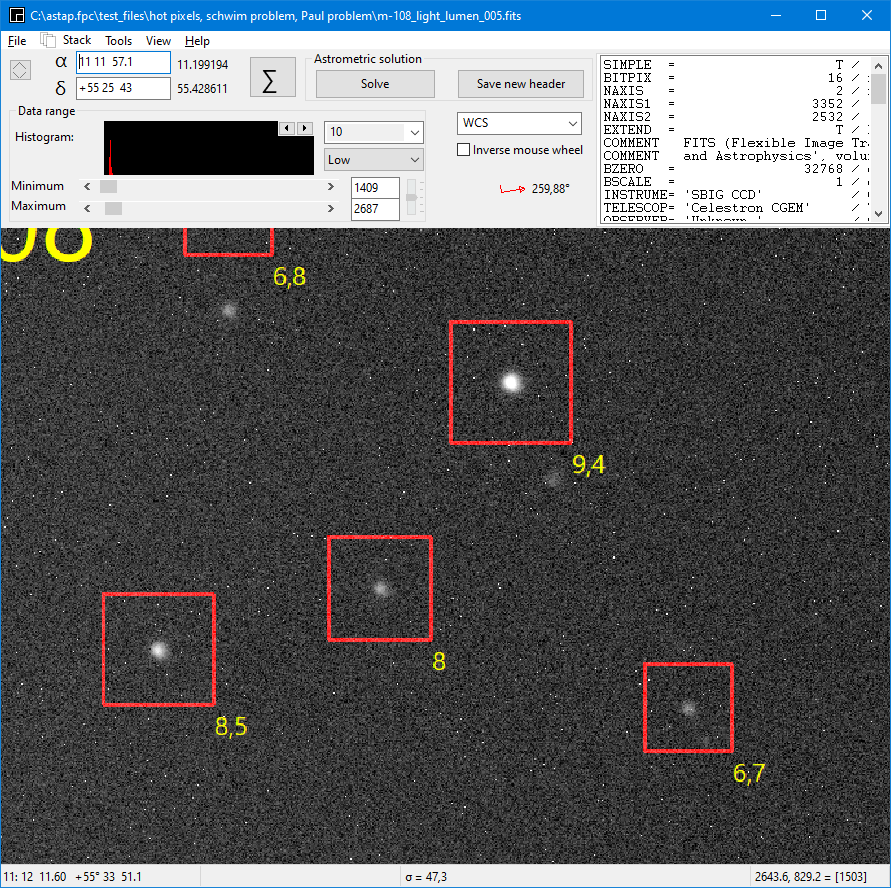 Posts: 303
Karma: 6
Less More
Thank you received: 83
New Internal Solver for Mac, Windows, and Linux -- Testing/ Experiments needed #54210
Using the M108 image, I tried to extract the brightest stars using SExtractor (Source-Extractor is much better name) . As you can see it misses one of the three stars visible but select some noise instead. Since the image scale is not used maybe a filter "take the 50 largest objects" would help. But if several several galaxies are visible it would work less effective. A minimum size would be most simple to implement.

The "Keep # stars" filtering work currently the best. Limiting to only 50 or 100 brightest stars the Sexysolver solves the M108 image in no time. Using the Source-Extractor in combination with ASTAP doesn't work. Only a minimum size setting works for ASTAP. For this limitation there is already as command line option -m implemented. 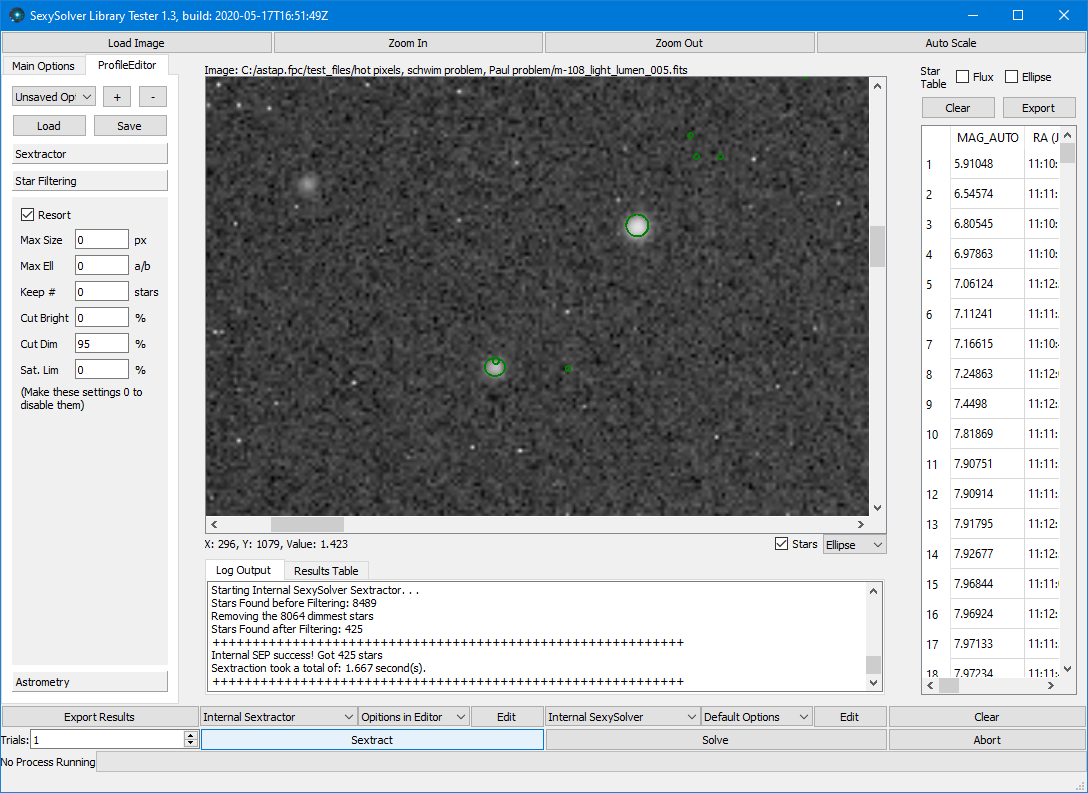 Posts: 184
Less More
Thank you received: 2
New Internal Solver for Mac, Windows, and Linux -- Testing/ Experiments needed #54243
Han,
thanks, I updated my version of ASTAP on the Rpi 4 and when I used your settings for minimum star size it did solve almost immediately. The exposure on that image was 60 seconds and i did have the camera cooler on, but it was not set very low; anyway the SBIG is getting on in age and noisy.

If the internal solver works really fast, then spending a little more time on the exposure (to help it work fast) is a good trade off. Especially when you are supposed to be on a target you cannot really see.

Source-Extractor is crashing on my Rpi because of Out-of-Memory, but usually after it has completed a process. I was running several in series trying different star size options and then solving. it eventually solved but then crashed. Did not seem to hurt anything. It could be a pain in Ekos.

Most of the time I spend at plate-solving in Ekos is during polar alignment, waiting for the online solver to load and eventually solve (it usually has). My exposure there are typically 10 seconds, I certainly could have a dark available, not sure that is a current option in Ekos. The images sometimes have overblown stars (like Polaris), but sufficient stars in the field to solve.

Here is an example:
Polaris _10sec_May13 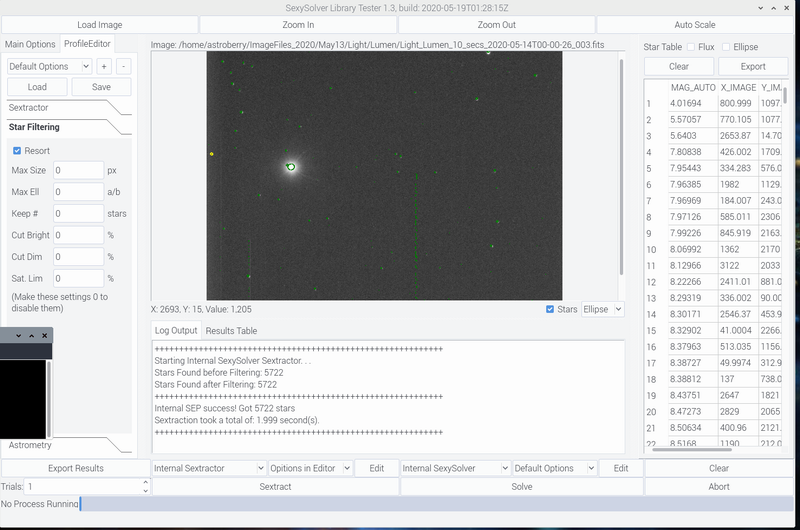 using the editor and selecting Min Area - 60 seems to be the best match here for eliminating the noise and just finding stars. using scale and not position it solves in 26 sec. 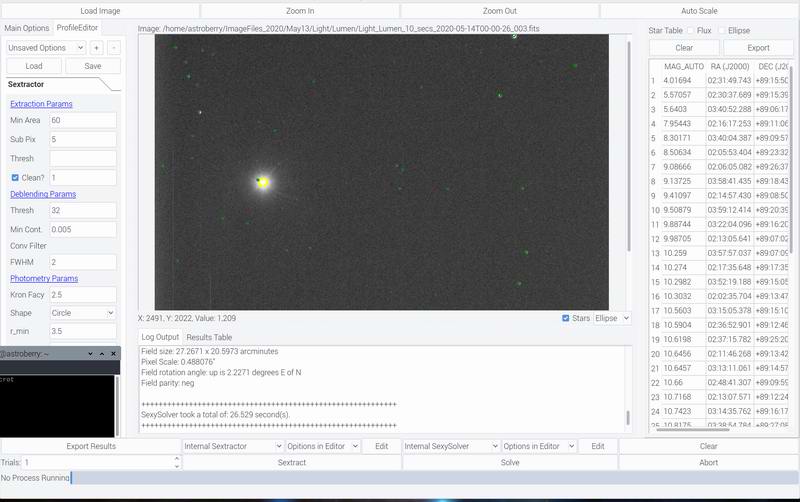 the syslog says it is kill the SexySolverTester process - either that or sacrifice the child process? Interesting that it closes down after a few seconds after it has completed the solve, and it indicates "no Processes running"
so why is it failing then?

>>I certainly could have a dark available, not sure that is a current option in Ekos.
This is an option in ASTAP not EKOS.

The star filter "Keep #" option works best in the SexySolver for hot pixels but you have to select near the internal solver "Options in Editor". I'm not sure if that option is available in Source-Extractor.

Posts: 184
Less More
Thank you received: 2
New Internal Solver for Mac, Windows, and Linux -- Testing/ Experiments needed #54257
So I think I have forgotten how this will be implemented in Ekos, will it be transparent to the user or will we have the option to select one approach over another? If it is the later will it open up the program (ASTAP, SEXYSOLVER, Astrometry, or...) and we will have access to edit the inputs and make changes 'locally' and 'interactively' (make changes until it solves) or will they be run from a command line with options set in the Ekos program (with some user input)?

I am concerned that if (and when) it runs out of memory on the Rpi that it will drop us out of Ekos completely, rather than just stop the solving program. So far when the solver has been stopped due to low memory, I have been able to just restart it and nothing else has been affected.

Perhaps I will try running the solver with Ekos running in the background and see what happens.