As a companion to those changes, and following some excellent suggestions made by Jasem, I'm now introducing a couple optional user-interface elements to help you in the PA process. The user interface is more-or-less the same through the measurement steps (though some of the instructions have been modified, and I moved the "legacy polar alignment" process to a new sub-tab).  However, once you reach the correction page, where you would adjust your mount's altitude and azimuth knobs to correct polar alignment error, there's a new checkbox titled "Update PA Error" that enables some new UI elements. If you check that, then: This can be seen in this screenshot: 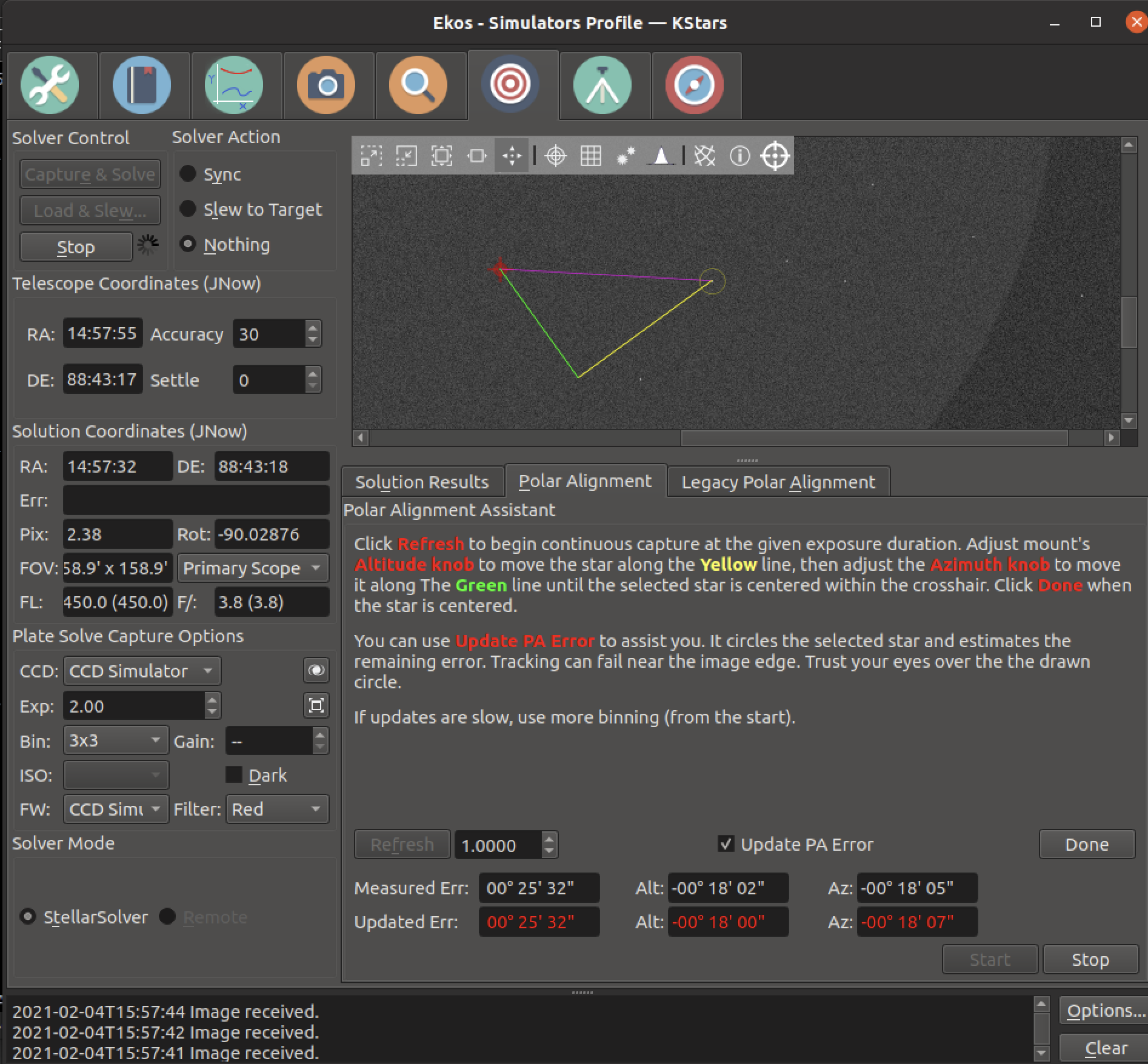 Clearly these things require the system to track your reference star, in a somewhat analogous way to guiding. This requires star detection for each of the refresh images, but it turns out that doing this only adds a small amount of overhead (though the overhead is measurable--see below, so that's why I made this optional).

I want to point out that these are aids to help you move to the right position, but do not in themselves change anything. So, if you suspect that the tracking is wrong, ignore it. In my experience the tracking is very good, except for very close to the image edge. Again, if the circle does not draw, or draws in the wrong spot, ignore it and the estimate of corrected PA values.

Finally, while experimenting with this, I looked at the latency during the refresh stage. I found that with everything running on my Raspberry Pi 4, and imaging with my ASI 1600 (32Mb image file, ~20 Megapixels monochrome), even though I set the exposure time to 1s, the overall cycle time was 5s--most of that time due to image transfer (~1s for capture, ~3s for transfer and buffering, ~1s was due to star detection). If I changed binning to 2x2, that reduced to 2.8s (0.4s for detection). 3x3 became 2.3s (0.3s), and 4x4 binning resulted in 2.1s cycle time with 0.25s of that a result of star detection. Since the polar alignment estimation error is likely much much larger than a few pixels (i.e. a few arc-seconds), I think that you will have a much better user experience if you bin (e.g. 3x3) while doing you polar alignment, if you have a system similar to mine or with more pixels. Do not change the binning during refresh though. If you want to use a particular binning, use it from the start. Of course, if you just are measuring your polar alignment error, but aren't correcting, the binning won't change the overall time taken very much. Its impact is mostly in the refresh/correction phase.

Hy, really great work and I'm happy to try it out asap.
Though 'asap' probably still means a few months of clouds.

By the way, maybe the download times have to do with image transfer internally? I remember about 1,3 s download time when I enable fits viewer (during imaging) when disabled, this doesn't register (and seems to be really fast indeed!).

In order to reduce both download time and analyse time, it's possible to use a limited Region Of Interest around the selected star, and keeping track of the position.
And what about auto-binning, but when the error radius becomes small, automatically go back to 1x1 binning, but still with a limited ROI.

Thank you so much!