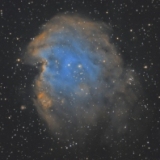 Magnus replied to the topic 'NGC 891 - looking to advance' in the forum. 2 years ago

I see. It's mostly the acquiring..

I have the same (ish) usb a4 lightpad, and I think it works well. No noticable 'noise' from it.
I did read up on using flats with my asi 1600mm-c and found some things that was true for these dedicated CMOS cameras.
Most of my calibrating was baseed on how you would do with a dedicated CCD, so somethings were needed to change.

First problem I had was Using Dark, Biases and Flats. For the noise of the CMOS chips it is more valuable to do Dark, DarkFlats, and Flats.
This is partly becaus the biases has to short exposuree lenght and causes some random / varying noise.

Because of this it is recomended to do flats with a exposure length of 0.2 seconds or longer, to avoid the varying bias noise, and instead of biases use DarkFlats to calibrate the flats.

So my process no is Lights, Darks, Flats, DarkFlats all at same gain, offset, focus and teemperature
Darks: same exposure length as Lights (but covered)
Flats: 0.2 second exposure length or longer. (I use 0.2s with the dimmable a4 led pad at lowest setting). You use the same focus as when the scope images the sky, so any light source at the devshield should be seriously out of focus, and a even field.
Dark Flats: same as flats, only covered.

Looks like it's going to happen!!! Starship sn8 launch! www.youtube.com/watch?v=Hb59U01YybA

Magnus replied to the topic 'NGC 891 - looking to advance' in the forum. 2 years ago

Can I ask where your struggles in capturing flats are? 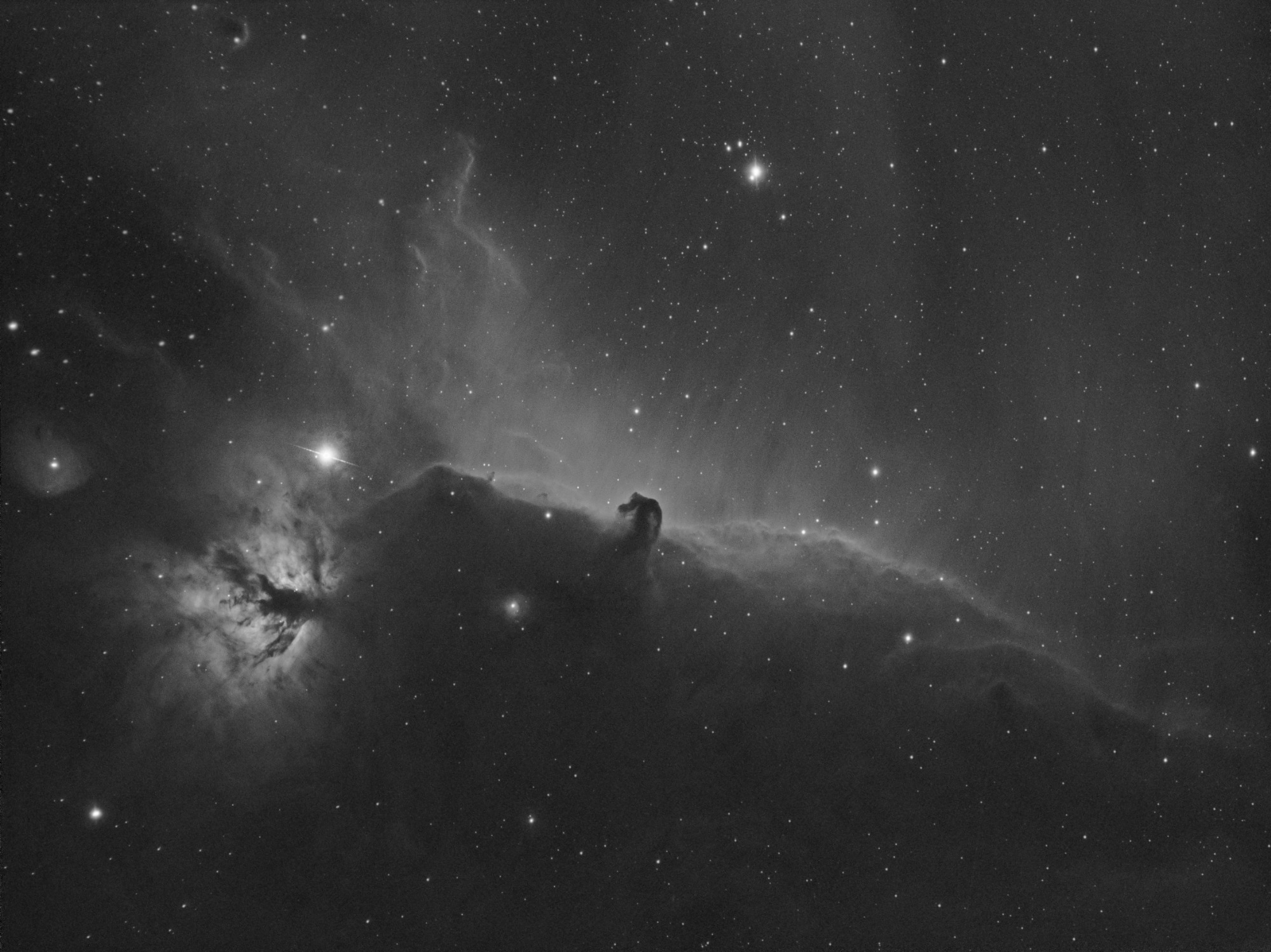 Magnus replied to the topic 'SEP multistar guiding' in the forum. 2 years ago

i have been guiding with my new asi 120mm-s (usb3) togheter with my asi 1600mm-c imaging cam. It's just a great mix! Drivers is working great, I have no bugs that can bodge a imaging session now, so that's great.

I hav been using SEP Multistar, sometimes binning 2x. Also with my East heavy balancing mod, AND I went for the 2 second exposure as mentioned previous.

This year I was able to guide at the Elephant's trunk nebula when it past the worst place for the scope to balance (the zenith) with good result.
I also had some guiding sessions with both RA RMS and DA RMS < 1 trough-out the session. Not as great as Stephane's first images in this thread (RA and DA RMS < 0.5!), but still very nice

At the moment every clear sky night is imaging night, so hope to ceep up the pace! 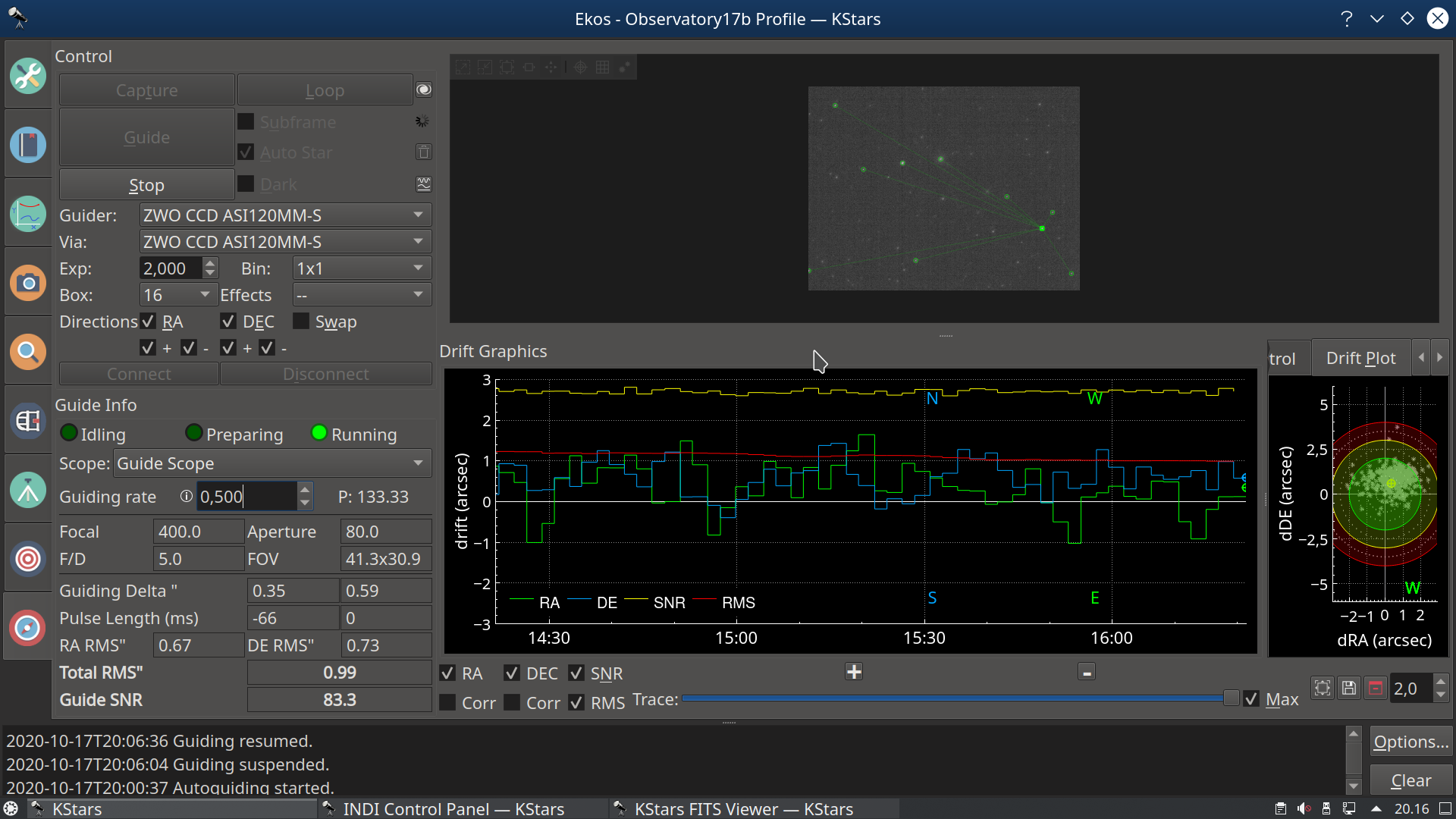 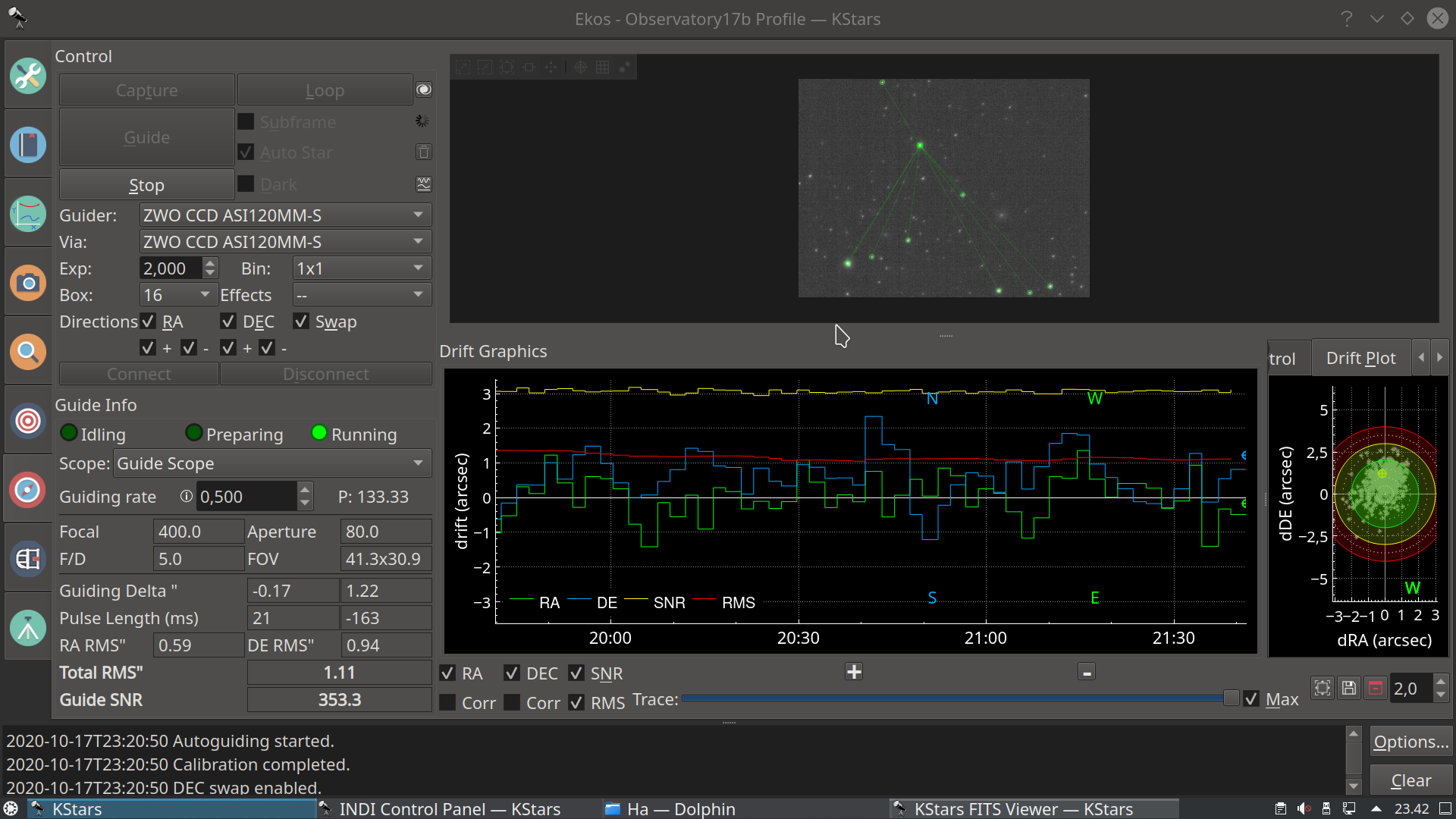 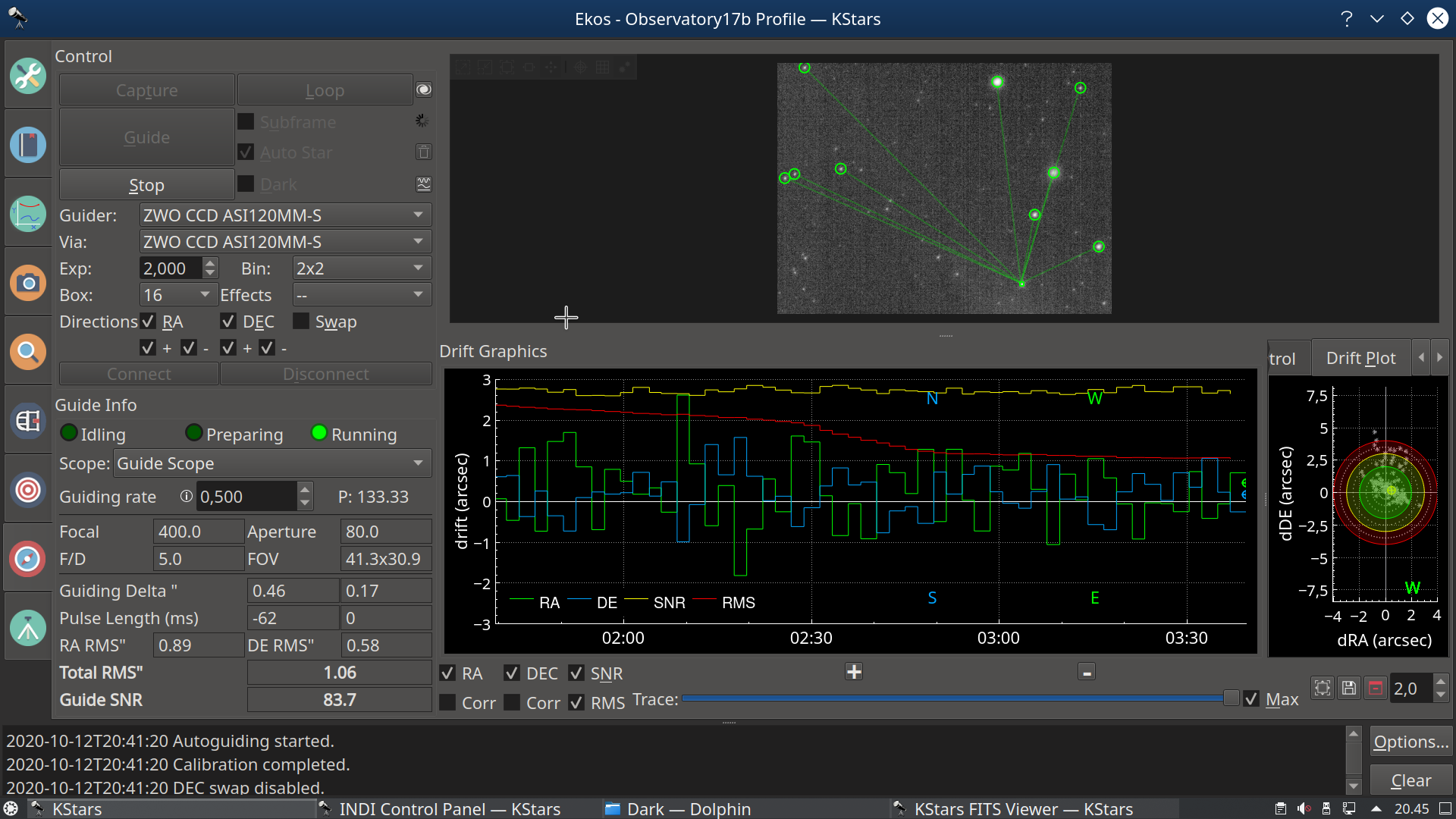 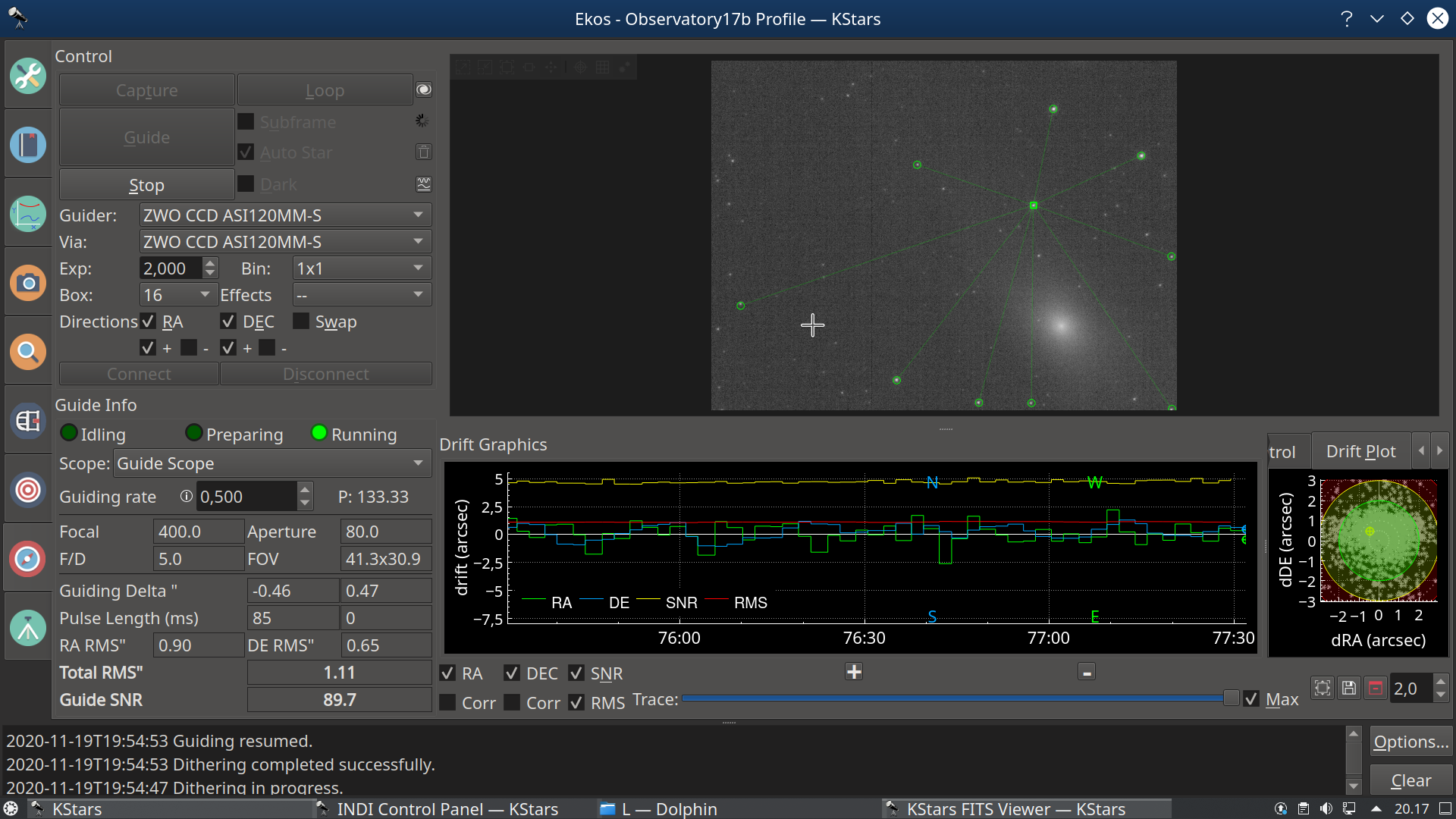 Hi Jasem, and thanks

Last time I tried the streaming in INDI was ~ two months ago, not sure if I was on 1.8.7 then, or when 1.8.7 was out?
When I tried it then, everything seamed to work. All the controlls, and streaming preview. However when I opened the file in ser player it was just a lot of noise. (It did roughly show the outline of the moon, but no usable image).

I can test it again next time I get some clear skies, and the moon is there. Longtime weather only shows rain, so might be a while.

Each .ser file was stacked in Autostackert!, then aligned using the FFTRRegistration in PixInsight.

I then upscaled the image by 2x. 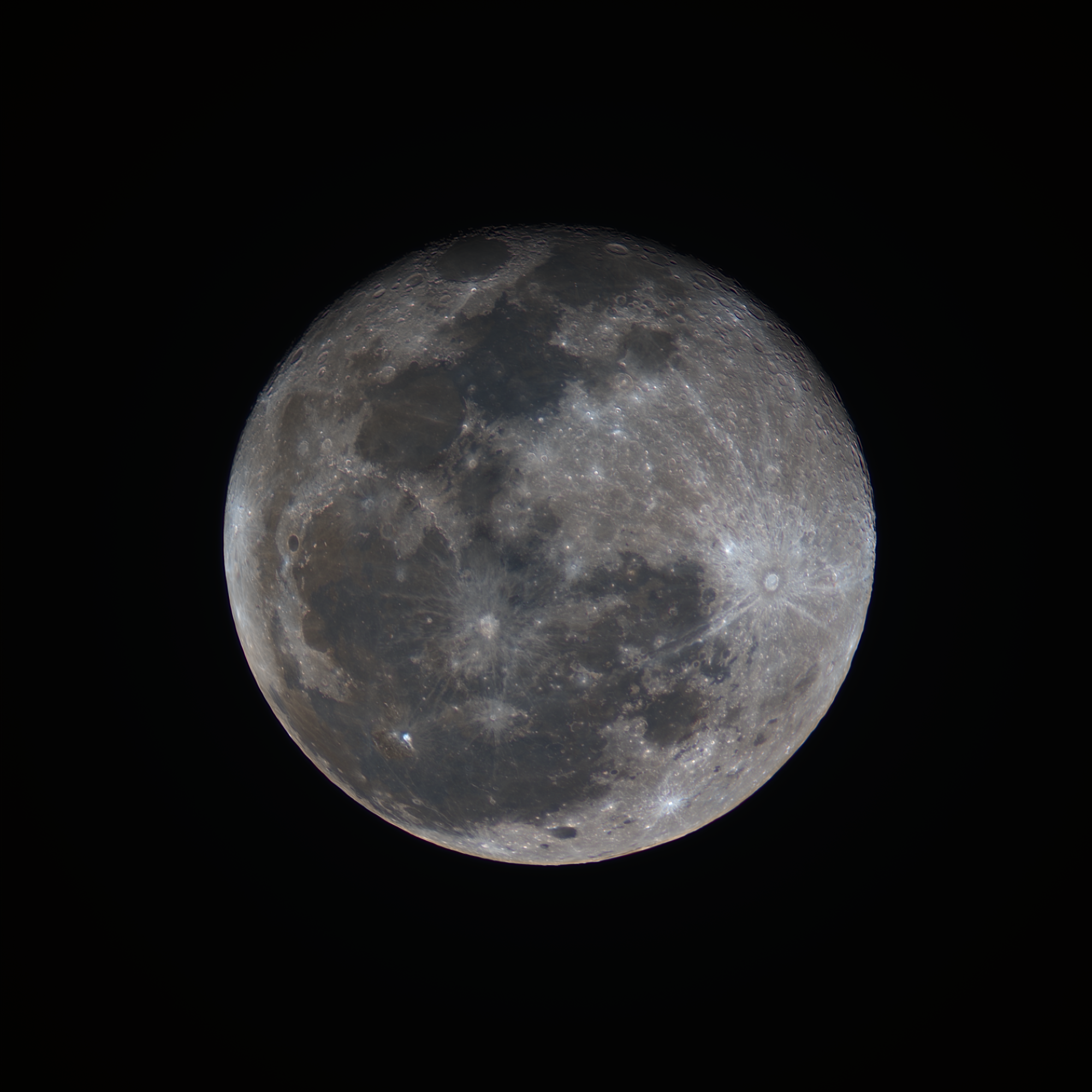