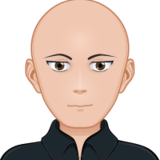 Noel created a new topic ' Unable to goto objects near meridian' in the forum. 3 weeks ago

I recently tried to slew to a couple of different objects that were near the meridian. The mount refused to move and no error was given. I could move around fine east or west of the meridian, but not within say 5 degrees of it.

Is this by design or is it something I'll need to investigate further - collect logs and take notes etc.

Noel replied to the topic 'Exit confirmation' in the forum. 2 months ago

Giving this a bump and following any progress - I too would like to see this feature.

A simple optional prompt would be awesome. If it could warn that EKOS is running and devices are still connected; even better.

Noel replied to the topic '[SOLVED] Pegasus UPB Driver Crashes after latest 1.8.5 update' in the forum. 3 months ago

Thanks Jasem, I found how to purge the config from the INDI Control Panel in EKOS.

This seems to be working again

For anyone that needs to do this, disable autoconnect of devices in your device profile. Start INDI, launch the control panel and purge the config from the options tab: 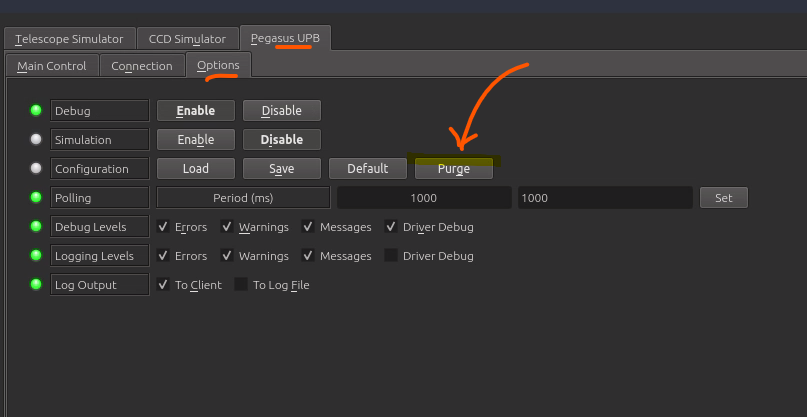 Noel replied to the topic 'Pegasus UPB Driver Crashes after latest 1.8.5 update' in the forum. 3 months ago

Thanks Jasem, can you advise the correct process to purge the configuration file?

When starting INDI with Ekos and devices are connecting, a message appears stating 'INDI Driver Pegasus UPB crashed. Restart It?' I have tested a simplified setup with Ekos configured with mount simulator, CCD simulator and only aux device selected as Pegasus UPB. During testing I disconnected all devices from the UPB - only power and USB to the PC are connected. (While connected to the UPB, other devices - EQ6-R mount, ASI and QHY cameras worked OK - I'm confident the UPB is functional).
I'm using a Lenovo mini PC running Ubuntu 18.04.4 LTS
I note my Pegasus UPB (v2) has firmware 1.3 (I see no newer version available).

This issue has only occurred since installing 1.8.5, this system worked fine with the previous version.

I have tried the nightly version without success.

Is there a way to downgrade to an earlier version?

Thanks for your assistance. I appreciate any further advice anyone has.

Noel replied to the topic 'Problem with polar alignment in southern hemisphere?' in the forum. 3 months ago

Hi - I had the opportunity tonight to capture a log from my rig while performing a polar alignment. Hopefully it has enough details to be useful to someone.
I'm in the southern hemisphere and currently using a canon 650D DSLR on an 8" newtonian with a Skywatcher EQ6-R via EQMOD.

I experience the same issue mentioned in this topic. 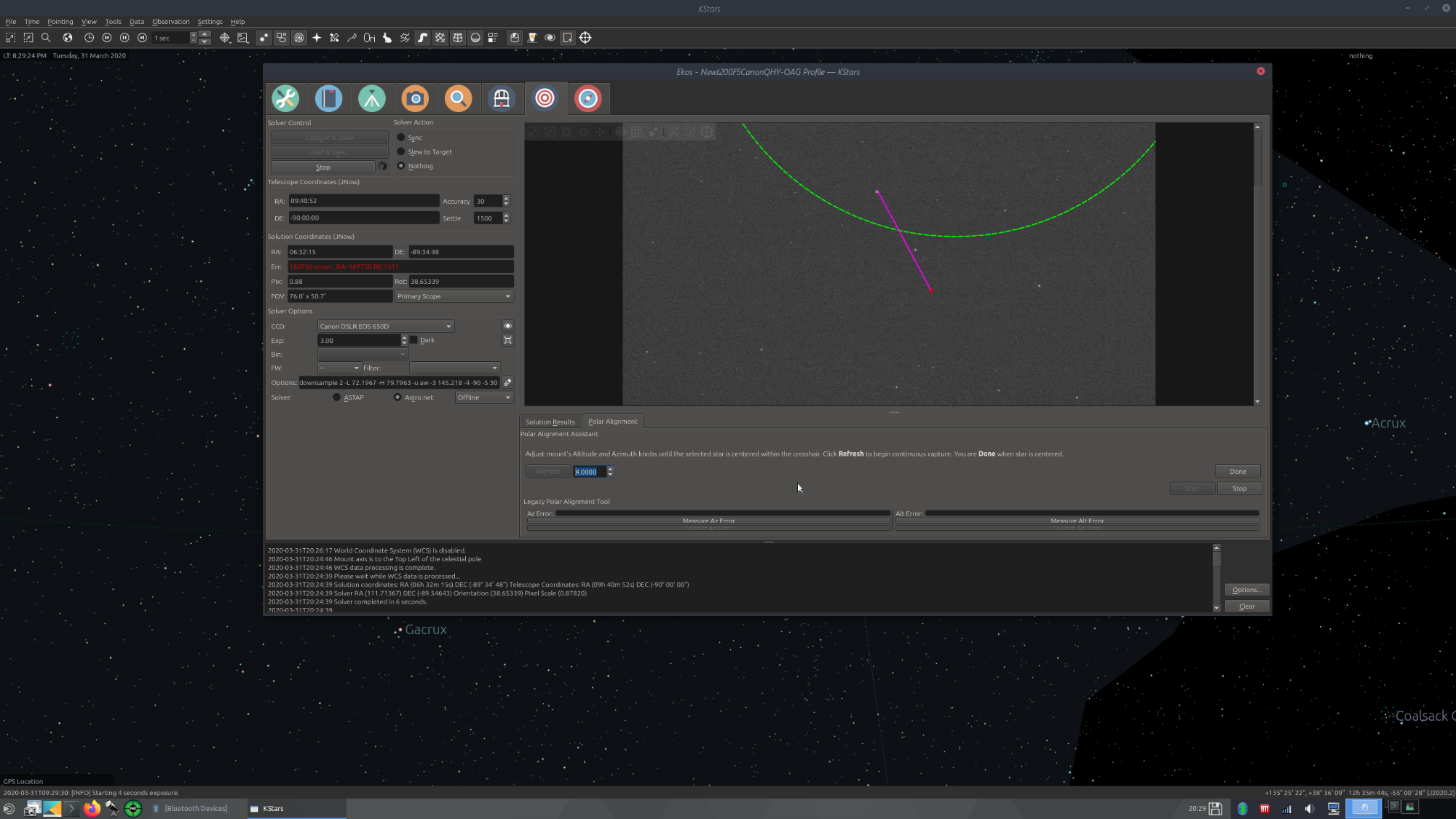 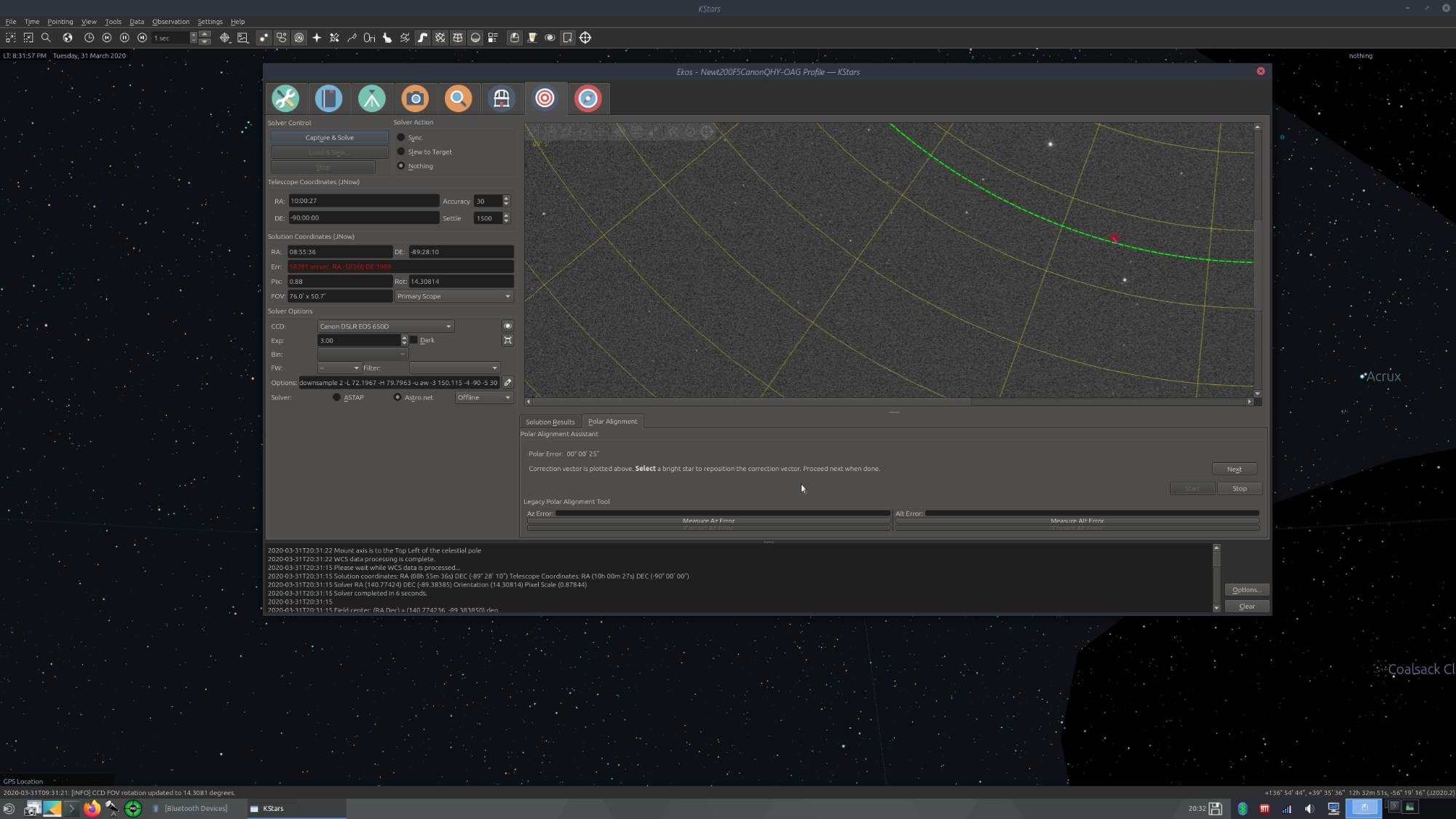 Noel replied to the topic 'Problem with polar alignment in southern hemisphere?' in the forum. 5 months ago

I'm having the same issue and I thought I was doing something wrong! So glad it's not me.

I found last night after trying the Ekos PAA that my PA error got progressively worse (starting 5arcmin, ending at 9deg) each time I ran the routine.
In hindsight, when I first used Ekos a couple of years ago I gave up on the PAA after similar symptoms (it was a long cold frustrating night chasing alignment!) and I then switched to a polar drift alignment process using PHD2. I wanted to use the Ekos routine again and had a chance to do so last night.

After several attempts and it progressively getting worse, for an experiment I tried to adjust the star position in the opposite direction by imagining where the target would be if the vector was flipped. To my surprise the PA error reduced after each iteration - I got back down to 5 arcmin. I couldn't get under 3arcmin, it was well passed midnight and I gave up. Maybe it only needs to be flipped on one axis? It was too late to further test this idea.

For now, I'm happy to know I'm not (a) crazy, or (b) dumb and will go back to doing a PA routine with PHD2 - though I'd really like to be able to manage it all in Ekos as I can't use my DSLR with PHD2, or at least I haven't worked out how to.

I'm happy to try any suggestions you have. 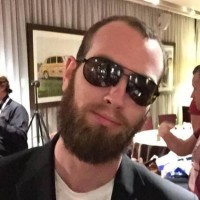 Simon Dodd thanked Noel in topic I made this! INDI in an all-in-one power box, with dew heater 1 year ago
0 0

Jasem Mutlaq thanked Noel in topic I made this! INDI in an all-in-one power box, with dew heater 1 year ago
0 0

Jasem Mutlaq thanked Noel in topic I made this! INDI in an all-in-one power box, with dew heater 1 year ago
0 0

Helge thanked Noel in topic I made this! INDI in an all-in-one power box, with dew heater 1 year ago
0 0

Noel replied to the topic 'I made this! INDI in an all-in-one power box, with dew heater' in the forum. 1 year ago

Cheers for the feedback. The unit is still going strong and I'm planning out the next revision as I'm finding this a bit bulky. OK for side-by-side mounting but I'm looking to move away from that and wanting to mount the unit on or under the OTA, meaning a longer narrower design would be better (a bit like a QHY Astrobar, or Prima Luce Eagle2).

Some lessons I've learnt and improvements I'm considering:
Move to an arduino dew heater controller, this should be less bulky in the case as using the stripped down LED controllers made things a bit bulky.

The fuse panel module added a lot of bulk to the unit. First appearances make it look a bit snazzy like a RigRunner but really would have been much better if built onto a PCB - or ommited and had a 1 or 2 fuses where it really counts. My next version will be far less busy looking.

Getting a PCB made is pretty cheap these days - many online services are available, even if you end up with 3-5 of the same board it's still cheap. I'm planning to put much of the 'power distribution' side of things to PCB to cut back on the mess of internal wiring. If it wasn't for the wiring and fuse panel the whole unit would be much smaller and lighter.

I now have a 3D printer as well so have a lot more options when it comes to the case design to put it in. I intend to 3D print an inner skeleton which will be sandwiched between two thin aluminium plates. The skeleton will hold the boards and connectors, the aluminium panels will be tough for mounting between rings and dovetails (with plenty of plastic around each through-hole internally).
(I stole some ideas from QHY - have a look at the internals of the QHY Astrobar here: www.youtube.com/watch?v=G_X6enDe5ds&t=1121s )

Finally, a small blower fan like those used in laptops will allow for a slimmer design.