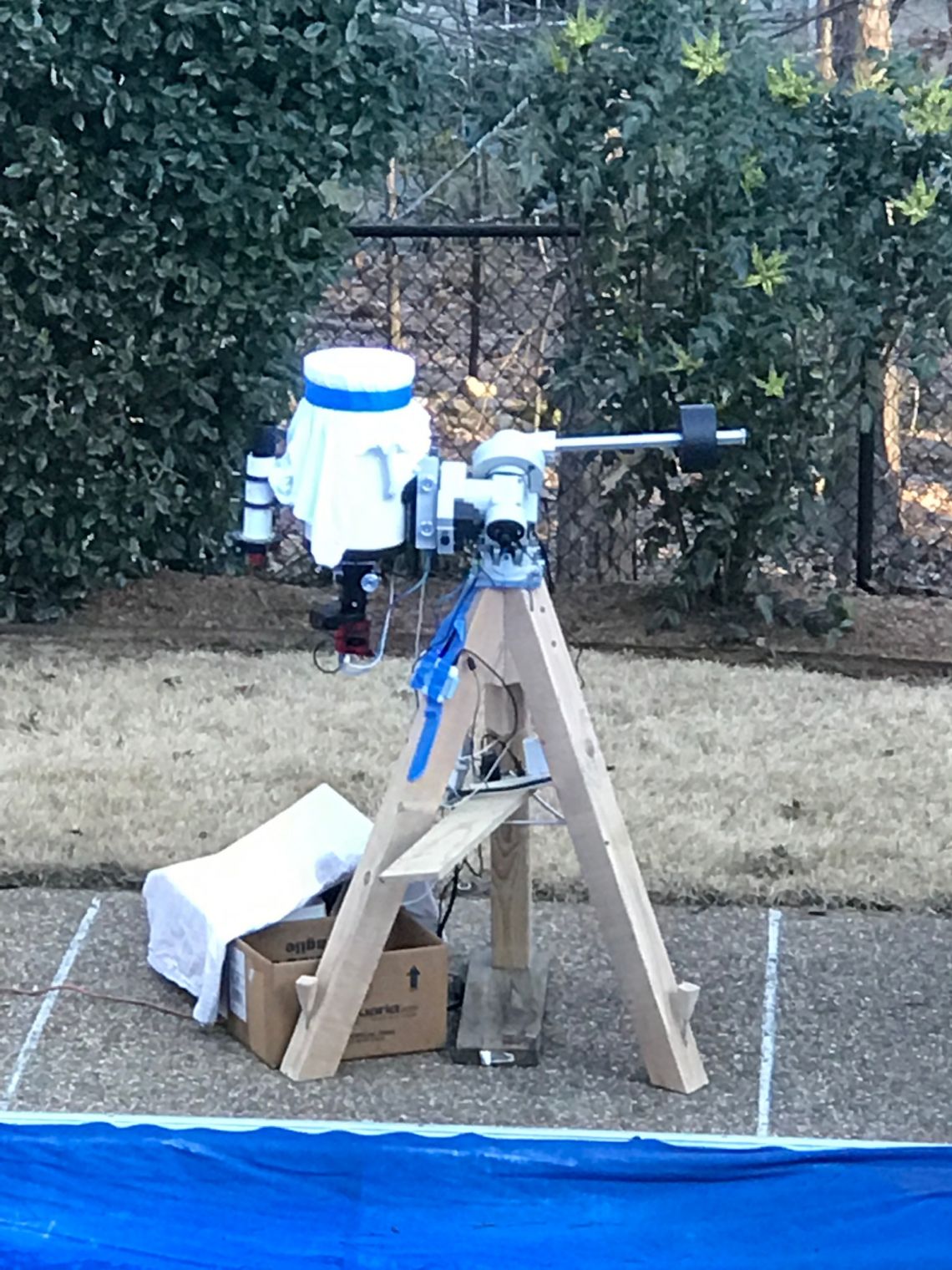 Michael replied to the topic 'Tips for Auto-Focus' in the forum. 3 months ago

There is no one size fits all.
I like “auto select star” and “ use subframes”
Here is my setup and routine, working with a diy arduino based, 3D printed focuser.
Inherently this little machine has a fair amount of backlash, which is often the reason for failed processes.
Anyway, the linear process, implemented fairly recently deals with the backlash issue the best, IMHO. Starting from a “last good” focus position it drives to *in my case* inside by 300 clicks, measures FMHW every 30 clicks while driving through optimal focus to outside....and establishes a v curve. After return to inside it “walks back” to optimum focus, in about 80% of the time it will complete successfully after 15 steps.
Variables I had to adjust: different filters will require different exposure. For a 125 F6 refractor, with an ASI1600MM I typically use 2 sec for L, and 5 for RGB. Narrowband I found to be tricky, sometimes depending on the target I may get away with just 5, but often I have to bump this up to 10 or even 15 sec,
The value for the initial move from ”last good” to start the establishment of the V-curve is 300 clicks, roughly 10 times the critical focus zone. Narrower than this resulted in failed focus procedures due to inability to establish a good v curve, wider than 300 resulted in inaccuracy...

I spent several evenings playing with these values, and making sure I get a nice V-curve with any filter.

I second Jabians point about starting with a non automatic focus first. I stop the autofocus routine once the first image comes in, select a star myself, and then hit “loop” which now just brings subframes that look pretty identical on the screen. Using the arrow buttons I drive the focus in or out to get the smallest possible star image. There i stop, maybe a für a few back and forths, and initiate autofocus,..

Works for me quite well... attached a current screenshot, hope this helps... 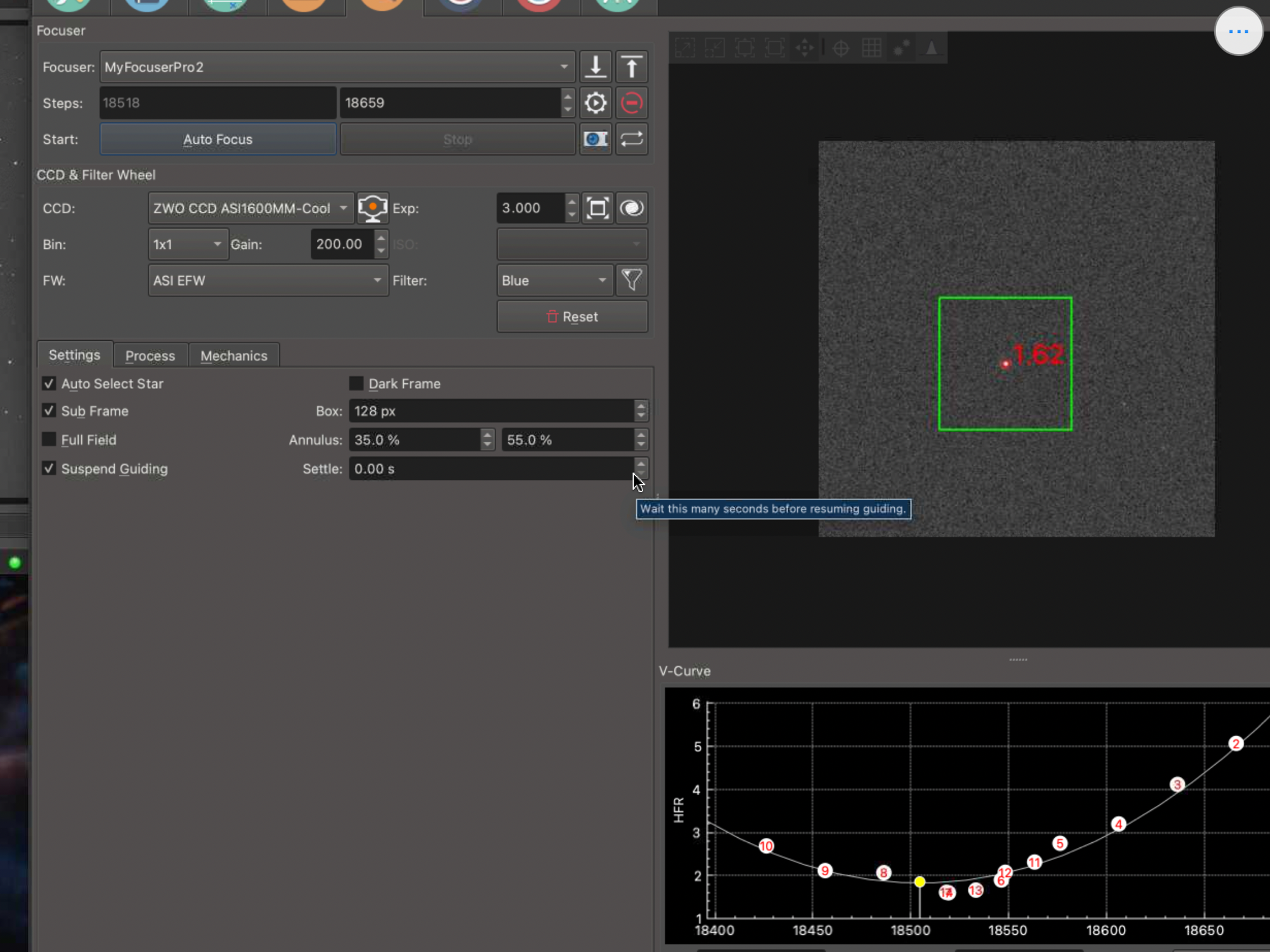 Michael created a new topic ' PbPi4 issues' in the forum. 3 months ago

Upgrading to RbPi4, I found this little issue: Image below shows left the 3, on the right the 4....best seen with very short (like BIAS) exposure, but still visible with longer exposures. pattern is variable so darks/flats cannot remove that.

Michael created a new topic ' mapping the horizon....' in the forum. 4 months ago

my semipermanent observatory sits next to the house, and several trees are limiting my view. quite often I estimate that I should be able to get Rosette 2200 and 0300, but I am often quite wrong...

is there an EKOS feature that would allow me to semi-automatically "map the horizon", so that EKOS could tell me : you target is below YOUR horizon?

how do you solve your horizon problem?

Michael created a new topic ' Firmware updates through Astroberry' in the forum. 5 months ago

CEM60, ZWO1600 have firmware update available, can this be done through the Astroberry?

Michael thanked Peter Sütterlin in topic Narrowband: do you use a focus star? 8 months ago

Michael thanked Jim in topic Narrowband: do you use a focus star? 8 months ago

Michael thanked Scott Denning in topic Narrowband: do you use a focus star? 8 months ago

Michael created a new topic ' Narrowband: do you use a focus star?' in the forum. 8 months ago

Seem like with my setup i have to run autofocus for each NB filter. Tried multiple strategies (full field/ donut/ subframe)(exposure times) but too often, with autofocus failing often after 20+ minutes, the scheduler aborts...

I would think a slew to a designated bright star would allow for much shorter exposure, and get more reliable results...

Michael replied to the topic 'after upgrade to 2.0.2 slow fits downloads...' in the forum. 10 months ago

I appreciate that, but my hardware is unchanged, and for the last year, during many nights, probably thousands of downloads, i had 7.5sec /32MB... I suspected VNC, does this not add another trip to the data?

Michael created a new topic ' after upgrade to 2.0.2 slow fits downloads...' in the forum. 10 months ago

First: Hats off to Kaczorek, ASTROBERRY is awesome and has served me very well over the last 24 month. Thanks Kacz!

after the usual upgrade-hiccups I was able to connect, but downloads for my FITS - which I store on my desktop - have slowed down quite a bit: was 7ish seconds, now highly variable between 18 and 34sec

not too big a deal, but if there is an easy fix I would like to learn about it...

Michael created a new topic ' Linear focus module..' in the forum. 12 months ago

Occasionally focus fails and aborts the session, typically wildly out of focus. If running from the scheduler the session immediately restarts, and attempts focus again but now from an already bad starting point. In linear focus mode the starting point is initially moved out even more, making recovery virtually impossible.

For example:last night initial focus was around 9600, KStars finally crashed with a focused position of 12600, a typical scenario (I believe the focus module might be crashing KStars??)

If the focuser would return after a failed routine to a “last known good” position, this might be avoided...