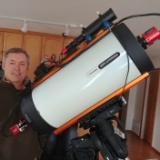 Doug S replied to the topic 'Can't get into focus anymore' in the forum. 5 days ago

Hi Jerry, On first glance, your HFR values are outrageously large. I think all the algorithms struggle with donuts (i.e. focus so far out that it's hard to tell what direction to go). I would recommend a manual search (first time is always the hardest) through the focus range, watching how HFR changes. When you finally find a good starting point, then run the algorithm (which ever you use, but I recommend linear) again. I wouldn't consider running the algorithm at all until you get inside of HFR=3 or better. You could have a HW problem, but the SW will not like those HFR values....

The OP started this chase with a memory crash. If you now think this is a USB3 issue, please see this post on RF interference (2.4Ghz wireless only):
www.indilib.org/forum/general/6576-pi4-u...erference.html#59667

ok, we're getting to a different topic from the crash, but here's a tip about PHD2. Assuming your PHD2 profile is setup correctly, then start the PHD2 app but DON'T connect. Just bring up PHD2 on the desktop. Then, assuming your Ekos profile is correct for PHD2, go into the guide tab and push the connect button. That should connect Ekos to PHD2, and PHD2 to the mount and camera. Sometimes the state machine between the two (Ekos & PHD2) can get confused. If this happens, just disconnect from the Ekos side, and reconnect again via the guide tab connect button. Once you are connected, it should stay connected. IMO, you probably should get into the habit of disconnecting and reconnecting from the Ekos guide tab (not the PHD2 side) if you don't already. I've seen it work fine connecting from PHD2 to Ekos, but I experience more problems with interface states when done that way.

Just to be clear....Don't use the package updater app on the desktop (doesn't work). Use this command in a terminal instead:

If running this command brings a bunch of packages, it might be advisable to reboot the PI before running your test.....

After you run your tests, if you are still experiencing the crash, I recommend creating a support ticket on the SM OS site. Jasem will respond and help to resolve. Having the full logs will be helpful. Good luck, Doug

Didn't mean to suggest that your issue is power related....it was a side note about long term stability. Looking at the log, it seems clear that a memory stomp is occurring, and it's bad enough to corrupt the stack. It's not clear whether memory has been exhausted, or it's just a memory bug that your configuration/setup has tickled. If you are getting 70 subs, what about trying a test where you setup for 2 sets of 50 subs. Does that run clean? If it does, it will give a hint that memory exhaustion is occurring. You probably should plan to have a terminal window up as you're running, and run the memory free command a few times as the job is running to see how memory is being consumed. That will give you a good clue as to what's going on. I would do this for both tests (2x50, and the 70 crash). You want to catch this just prior to the crash in the 2nd case, and then after the crash. The output will be along the lines of:

A couple of thoughts: Are you running the most up-to-date distro of SM OS? If not, I would say that it's definitely advisable to update. If you are running an older SM OS distro, are you allowing the FITSviewer to pop-up? If so, it could be a possible culprit (only for older releases). I used to experience crashes with older releases, but find the newest release remarkably stable (especially now that fitsviewer issues have been addressed).

A couple of probably unrelated thoughts, but things to consider for more reliable service long term. You want to be sure your power bank is providing enough juice to the Pi4. Spec is 3amps @5V. If you're sharing power from 1 bank to 3 devices, you should make sure that full spec power for all devices is capable of being delivered (even though nominal draw after boot will be less). Generally, I wouldn't trust the PI4's USB ports to power devices. Theoretically, yes, but practically and reliably, no. Ideally, you should consider a powered USB3 hub. Cheers, Doug

Doug S replied to the topic 'Cont. problem with guiding: Scope cannot reach the start point with RA reverse' in the forum. 2 weeks ago

I agree with Wouter that balance in both axes should be the goal. I can't fully see your dovetail gear setup, but I'm left wondering whether you could re-distribute and/or dead-weight the dovetail a bit more to achieve balance. The dovetail itself seems symmetric enough; how far out of balance do you think you are in DEC? You don't seem to be carrying that much weight; I would think you still have plenty of headroom to adjust. About the calibration steps, besides the cal plot, you can look in the guidelog (can't remember if you need to enable verbose & file mode or not). The calibration section of the log will show the step size magnitudes. I use PHD, but the internal guider has a similar plot/log 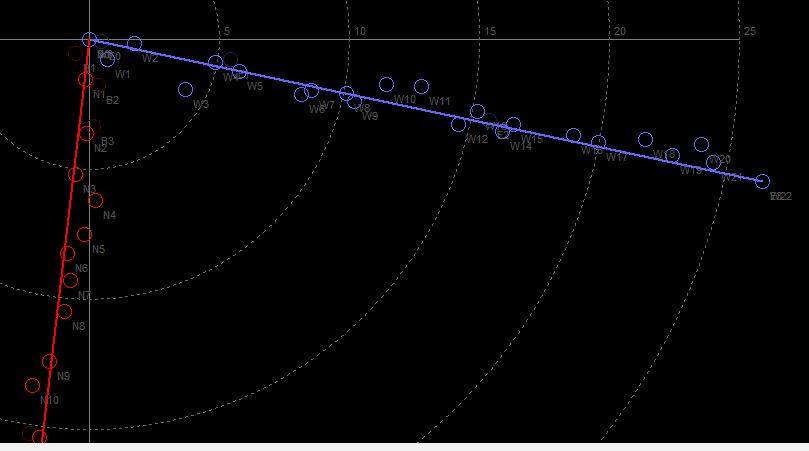 Doug S replied to the topic 'Cont. problem with guiding: Scope cannot reach the start point with RA reverse' in the forum. 2 weeks ago

Assuming your mount drive parameters are right, have you ruled out weight balance as an issue? Some mounts are pretty difficult to achieve correct balance by just loosening clutches and watching scope moves during setup. If not right, it will definitely show during calibration. If you're not sure, I suggest the following:

Let's say for discussion purposes you are imaging in the east (weights on the east side of pier/tripod). If you can't get RA reverse calibration to behave, it might imply you have too much west weight (i.e. you need to move weights down a bit on the shaft). If you are struggling while imaging west (weights on west side), it would mean you need to slide weights up the shaft. The amount to move is subtle and specific to your gear. If you want to experiment, don't get carried away. Try to remember where you started, make small weight adjustment(s) on the shaft, and then test calibration again. If balance is the issue, you'll notice that responses (how far each calibration step gets) will change. You might have less distance response in forward RA, but start picking up reverse motion that you don't currently have. With a couple of tests, you should get a good feel for weight sensitivity on calibration. In the end, the balance goal should be very slightly east heavy (keeps a load on the drive while minimizing oscillation). This trick works for RA and DEC. Anyway, something easy to try as you continue debugging. Good luck!

Doug S replied to the topic 'USB3 / WIFI' in the forum. 2 weeks ago

@ amendolajamie : Re: "The Mate hardware setup is exactly the same, so I know that this can work with the RPI4".

FWIW, I have yet to hear of anyone that can plug their equipment into the Pi4's USB3 port(s) while using 2.4Ghz wireless and achieve stable operations. Momentary success is possible, but not reliable operations (defined as consistently repeatable boots with functional wireless operation). Your symptoms sound EXACTLY like what everyone has experienced with 2.4Ghz wireless and USB3 on the Pi4. As I say in the referenced post, USB3, HDMI, bluetooth, and particular screen resolutions are involved. Best of luck as you figure out your strategy, but I'd suggest 5Ghz or an ethernet cable. Some have mentioned using separate USB wireless dongle configs (possibly from hubs), but I haven't followed those approaches closely (search other posts for details).

A second note about your chained camera config. I haven't run a chained config before, but I note that the ASI specs for your cameras are 170ma + 300ma = 470ma. That should be fine for USB3, but a bit tight for USB2 (recognizing they've set some headroom in the spec). If you add equipment in the future (focuser, SSD, etc.), you'll want to be thinking about a powered USB3 hub. In that case, only the data connect should go back to the PI's USB3 port....all other equipment is best plugged into a powered USB3 hub.

Doug S replied to the topic 'USB3 / WIFI' in the forum. 2 weeks ago

Here's a post you should at least skim......it has some helpful info about RF interference of WIFI, USB3, HDMI, and Bluetooth (Pi4 specifically). cheers, Doug
www.indilib.org/forum/general/6576-pi4-u...erference.html#59190

Doug S replied to the topic 'Temperature and Elevation focus compensation' in the forum. 3 weeks ago

After pushing the main Ekos tab (wrench), the configure Kstars popup will have the settings. Set verbose, and focus. Cheers, Doug 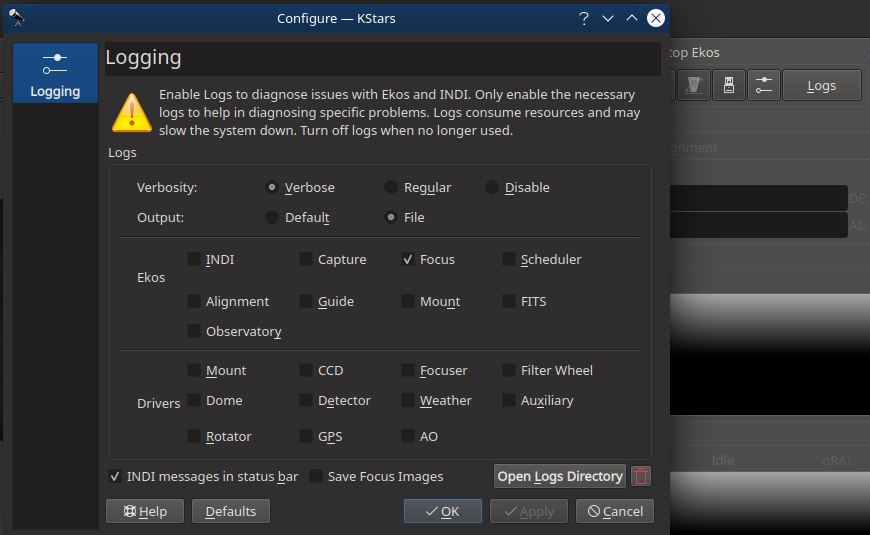