David Bennett created a new topic ' Guiding far side of passing cloud interval' in the forum. 2 months ago

I would be really pleased if someone with detailed knowledge can confirm the process EKOS follows to manage a period of passing cloud. With my setup I often see a few frames with significant drift during cloud and at the far side when visibility returns there has been a significant shift in the image making stacking or my case exoplanet photometry difficult or impossible to continue after cloud interruption. 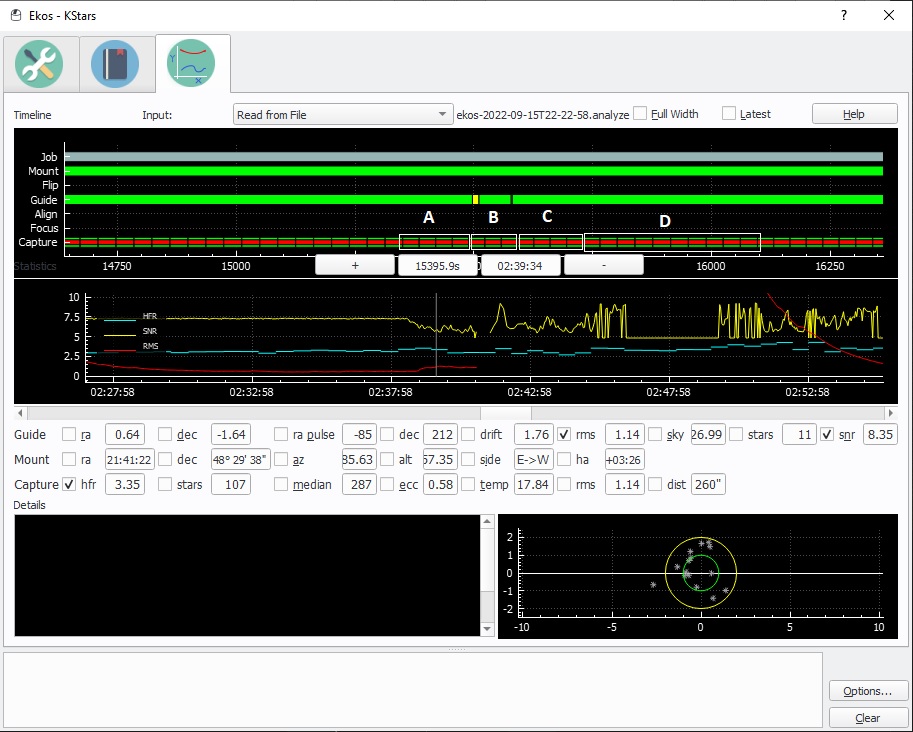 In the above example, prior to the set of 4 A images, all images are good.
Set A images are considerably fainter as cloud partially obscures but frames remain un-shifted and in correct location.
The 3 set B images remain considerably fainter and exhibit significant shift especially the last 2.
Set C images have regained brightness to pre set A values but remain about 8 min out of position

I notice the alignment module wasn't called after this cloudy interval so does guiding restore pre cloud position?
The impression (only an impression) is that when guiding is suspended due to loss of stars, the mount isn't set to default sidereal rate so significant drift occurs until guiding re-starts. I would have thought when guiding is suspended or abortyed the mount should be set to sidereal rate so it carries on to within the accuracy of its alignment and motors and is then re-aligned when cloud dissipates.

Obviously guiding is re-aligning all the time to keep guide stars in position. When guiding is suspended due to cloud and re-starts, if a shift has happened it will pick a different set of guide stars I think so not sure how it can re-align?

Next clear night will simply put the dust cap on for say 15 minutes when guiding then take it off and see what happens.