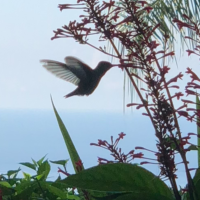 John replied to the topic 'Internal Guider Changes--please read if you use it' in the forum. 3 weeks ago

I don't know if this has been discussed in the past, but would it be possible to separate guiding from the rest of Ekos so the guider could run on a separate machine. In my setup Indiserver runs on a Rpi on the mount, while Kstars/Ekos run indoors on my Mac. The problem is that guide images need to come from the Rpi to my Mac. With multistar guiding it would be difficult to limit the amount of data transferred. So, a lot of data transferred during an imaging session is guiding related, which I suspect is responsible for comms related issues in my setup. There is also the delay to guiding whilst the most recent guiding image is transferred; which encourages me to lower the guiding interval to compensate (which probably makes the issue worse).

(I'm aware this can be done with PHD2 but would prefer to use the internal guider).

For most convenience the guiding gui would still be part of the Ekos gui, just the processing engine would need to run a server process deployable to another machine.

I've seen a few posts on IndiHub recently; this could be a good addition for this product.

So I installed Xcode and that fixed the problem with building expat. The script ran to completion and I can launch Kstars (version 3.5.6 beta) so all seems to be fine. I'll have a play around.

Thanks for your help!

Morning, great, thanks for this. Its fixed that problem so libsamplerate and the rest of indserver completes.

Moving onto Kstars... the script fails building "expat". Looks like the compile path isn't right as it can't find "stdlib.h" which I have several instances of on my system. I don't have Xcode installed so this could be the problem. The reason I haven't installed Xcode is that the Readme recommends using QT rather than Xcode, but obviously happy to install it if its required for the build.

Any tips for, at least temporarily, getting round this? When I delete the "examples" directory the script sinks it back to GitHub before proceeding in, I think, this statement...

John replied to the topic 'New build Script for KStars and INDI on Mac OS' in the forum. 4 weeks ago

Just googled carbon and sounds like you're right, its an old API that was discontinued in 10.15. Since audio.out isn't going to compile I try removing it and try again.

John replied to the topic 'New build Script for KStars and INDI on Mac OS' in the forum. 4 weeks ago

I'm following this process which gets as far as trying to build:libsamplerate/work/libsamplerate-0.1.9/examples/audio_out.c where it can't find Carbon.h and stops. I've had a quick look and I can't find Carbon.h myself. The code seems to include if its being built on Mac. Since its trying to build something in an "examples" directory maybe this isn't important and could just be skipped? Not sure. Any suggestions gratefully received.

I had a situation I've not encountered before where a MF was started (correctly) at 04:54:15 but did not compete. Guiding and capturing were correctly suspended. There were no log entries for almost 2 hours until 06:40:50 when the scheduler attempted to close things down at twilight. The mount failed to park because the system thought a slew was still in progress.

I've not seen this condition before and I have had a successful MF in 3.5.5. 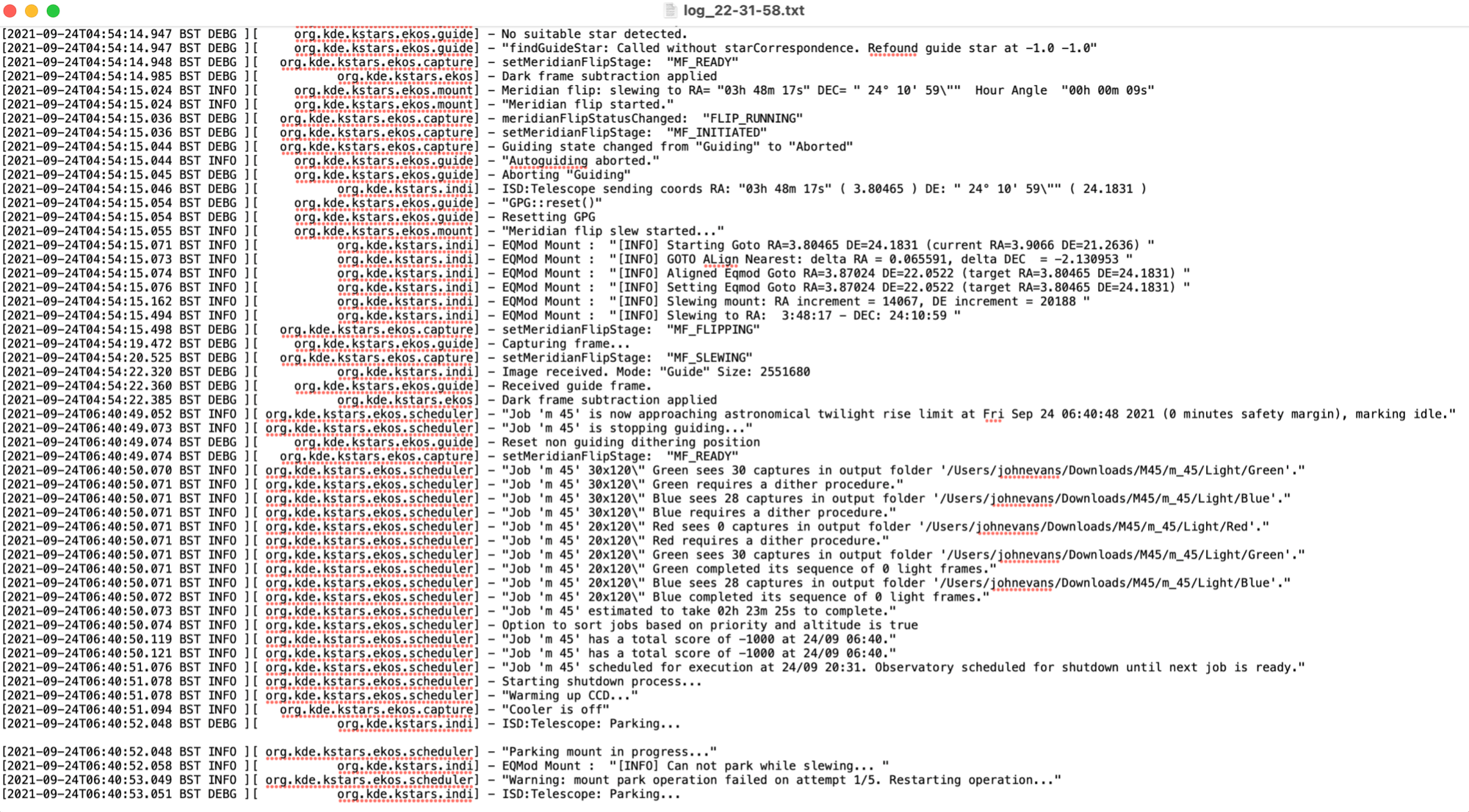 Thanks to all who worked on 3.5.5. Its generally working pretty well for me.

I've noticed that the East/West and number of degrees to slew controls on the polar alignment tool have been greyed out in version 3.5.5 so I'm forced to PA west at 30 degrees. Is there a way to get these controls activated? (or a reason they have been deactivated?)

Also, when PA'ing the helpful yellow circle that surrounds the selected star that I'm moving around to PA, seems to jump to different stars. Sometimes it jumps to a star off screen. Sometimes it "refinds" the original star and sometimes not. This obviously makes PA a bit more tricky. Moving the mount more slowly does help but doesn't always fix the problem. Sometimes it jumps stars when I'm not moving the mount. I don't know if this has changed in 3.5.5 or not but it was noticeably worse for me recently (but could be other factors). Anyway, any recommendations to improve this?

It was clear last night so I used 3.5.5. beta outside for the first time. My setup is Astroberry (current version) on Rpi running Indilib and connected to devices and Kstars / Ekos 3.5.5. beta on my Mac. Here's my feedback.
1. Polar Align. The East / West and Angle are greyed out so I was forced to use West / 30 as I couldn't change these fields. It worked fine but less convenient.
2. Setup screen. Graphs (focus / guide) fit their frames now so much improved.
3. Plate solving - worked as expected, all good.
4. Focus. Worked as expected, all good.
5. Guiding, Much better numbers (in fact almost a 100% improvement in RMS). Not sure I believe this, seems too good to be true. Was dithering and using GPG. When I process the subs I'll see if the improvement is real. Had some dew / fog problems so guiding did get a bit lost at several points and needed being restarted several times. I suspect this was conditions nothing to do with the software and I don't think the previous version would have done any better,
7. Analysis screen - worked as expected.
8. Kstars crashes. There were none all night!!!! This is the first time in ages Kstars has run all night without crashing.

To be clear... in the 2 sessions when I played with 3.5.5 beta to test for the crash on connect bug... all the crashes I experienced were on connect.

John replied to the topic 'Imaging during partly cloudy nights' in the forum. 1 month ago

I did the series of actions you mentioned in your original post and the behaviour was as you described for each step, and left it there.

I just had another play, probably starting Kstars about 25 times. What I would say now is that (at least for me) the crash is less deterministic than your original post implies. So I've had crashes when
- the Guide Simulator is not defined in the profile
- several crashes in a row (where Indi Server should still be running)
- and not had crashes when Guide Simulator is defined and I've stopped Indi Server.
- I had a run of several starts when no crashes happened (Guide Simulator defined, disconnecting from Indi).

So it seems a bit more random, but generally more crashes when Guide Simulator is included.

I've tried playing with 3.5.4 Stable again, probably starting it a dozen times with and without the Guide Simulator - no crashes.