indi_celestron_aux is not included with indi-full by default. It is a new separate driver and at the moment must be installed from source. You can install current version of the driver from the Nightly INDI PPA. for Ubuntu 16.04 or newer. It will probably migrate int main PPA at next release. This driver is a full replacement for the NexStar Evolution driver which will be discontinued in the near future.

Warning: This is a new, beta-quality driver and should be treated as such. There are no known functional issues with it and only one long-runtime-stability issue. Nevertheless, the driver should not be left operational unattended.

The building from source procedure is simple. You need to have standard indi development environment installed. Usually it is a package with a name like libindi-dev or similar. You also need gcc and standard development libraries. Assuming you have the indi-3rdparty source tree in Projects/indi-3rdparty directory, run the following:

If you have Debian/Ubuntu based system you can build debian package for the driver by running the following code (having indi-3rdparty tree in the same place and debian development packages installed):

The packages will be build above the driver directory (in this case in ~/Projects/build/).

The Celestron AUX driver provides GOTO and sky alignment functions of Celestron mounts which support AUX protocol and is designed to work over all available communication channels. It is modeled after EQMod driver for skywatcher mounts. It works directly with mount and axis controllers, without any help from the Hand Controller. In fact the HC may interfere with the driver operation and is better left disconnected from the mount or not used. The only potential function left to the HC is working as a serial interface to the mount. In principle, it should support any Celestron mount using AUX command set (most of them) with SkyFi wireless module, additional or build-in or over any type of serial connection (PC/AUX port with proper level converter or Hand Controller serial port). The driver was tested with NexStar Evolution (Alt/Az) and CPC (EQ) mounts.

The driver operation should be similar to other mount drivers. You need to set communication mode (Serial/TCP) in communication setup. The driver requires alignment (by sync operation after pointing to the selected object). Even one sync point is enough to have it operational in AltAz mode if the mount was properly leveled. The EQ mode requires a minimum of two sync points. For completely misaligned mount you need at least 3 sync points to have accurate pointing.

The Celestron AUX driver embeds the Alignment Subsystem module that comes with the INDI library. This module allows to align the pointing coordinates of the telescope with respect to the celestial frame. After module alignment, the telescope pointing coordinates read from the driver will coincide with the direction actually pointed in the sky, less than a small error. This operation is generally performed at each power up or when the telescope mount is moved or changed for some reason.

This alignment operation is not a substitute for a correct mount leveling and orientation to north meridian for altazimuth mounts or to north/south celestial pole for equatorial mounts. Indeed, they are a prerequisite.

All alignment procedures explained here are based on taking some reference points in the sky. For each reference point, its exact celestial coordinates must be known. This goal can be achieved in one of the following ways.

If there are no reference points, the alignment system does not perform any transformation of the coordinates read by the telescope axis encoders. These coordinates are taken as the current celestial coordinates as they are. Since at power up the Celestron mount software presumes to be pointing to north with zero altitude (altazimuth mounts) or with zero declination (equatorial mounts), the telescope must be manually pointed to such coordinates. Otherwise, any GOTO from Kstars will be wrong.

If there are two or more reference points, these are sufficient for the alignment subsystem to understand automatically the type of mount and to map the telescope axis encoders outputs to the pointed celestial coordinates.

Some rules of thumb to choose where to take the reference points. Avoid critical areas around celestial poles and zenith. Take them not too far from the sky zone where one want to point at.

The Celestron AUX driver alignment procedures explained below refers the use of Kstars.

This alignment can be done using the index marks of the mount or using the coordinates from the hand control. Tracking must be disabled.

After the second SYNC, the driver is aligned and the GOTOs done by Kstars must work properly with some small error.

This alignment can be a second step after the "quick alignment" or a start point. The only difference is that, if it is a second step, one can use the GOTO and the plate solving capabilities of Kstars to point the sky where to do the plate solving. Otherwise, another type of pointing is needed as listed above.

The screenshot below shows the Ekos plate solve tab. The plate solve procedure can started manually by clicking the "Capture and Solve" button at the upper left. 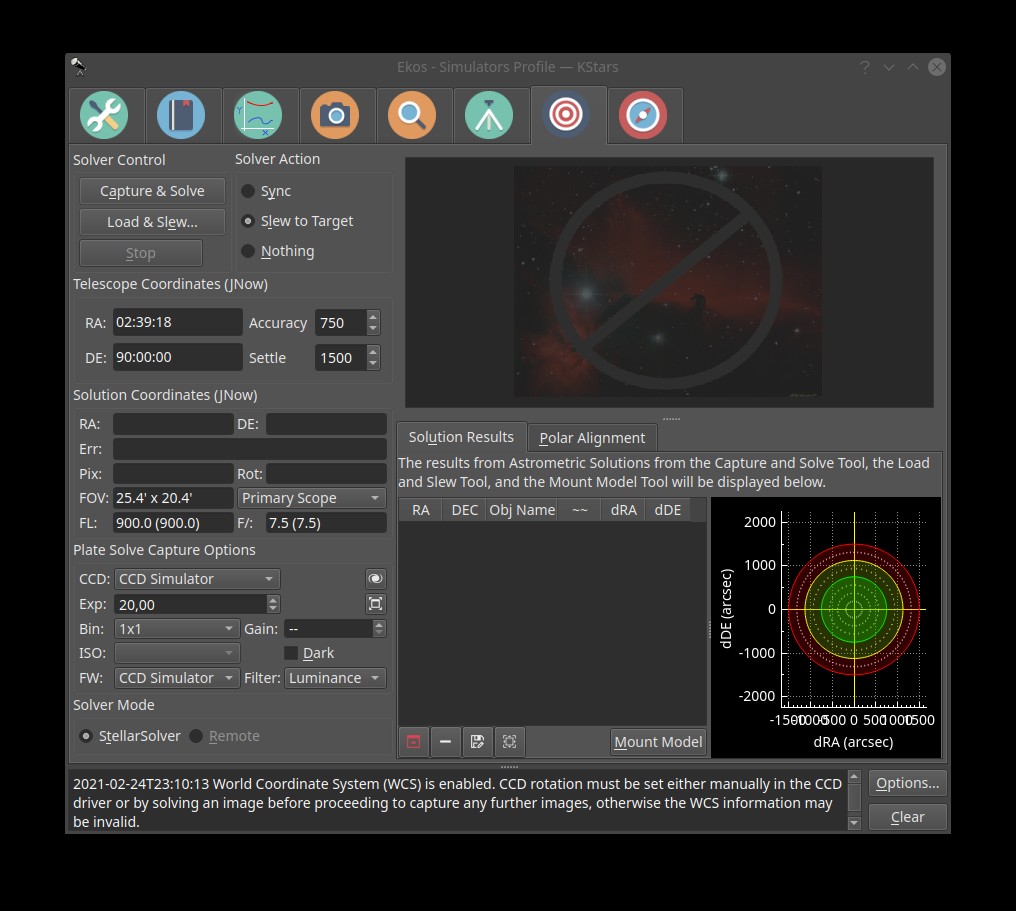 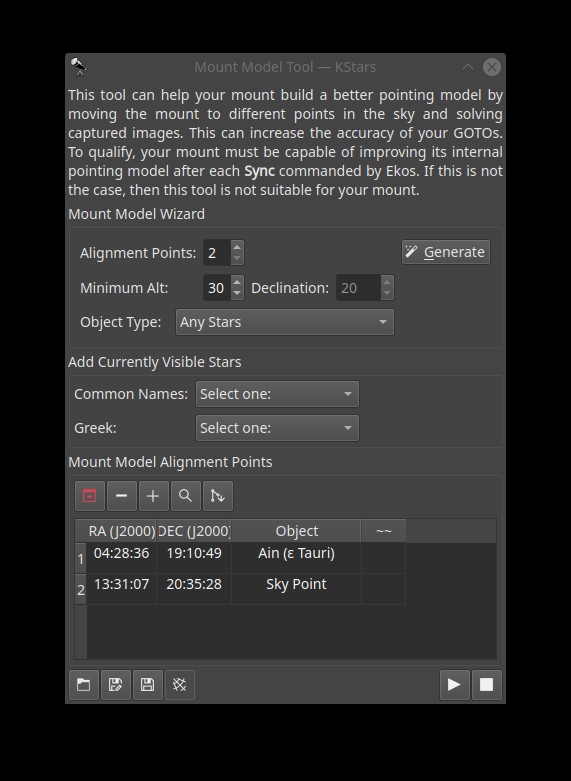 Before to do a manual SYNC with Kstars, the telescope must be pointed at the selected reference point and the celestial coordinates (RA/DE or HA/DE or ALT/AZ) of the point must be known.

Open the mount tab of Ekos and click on the upper right button "Mount Control". 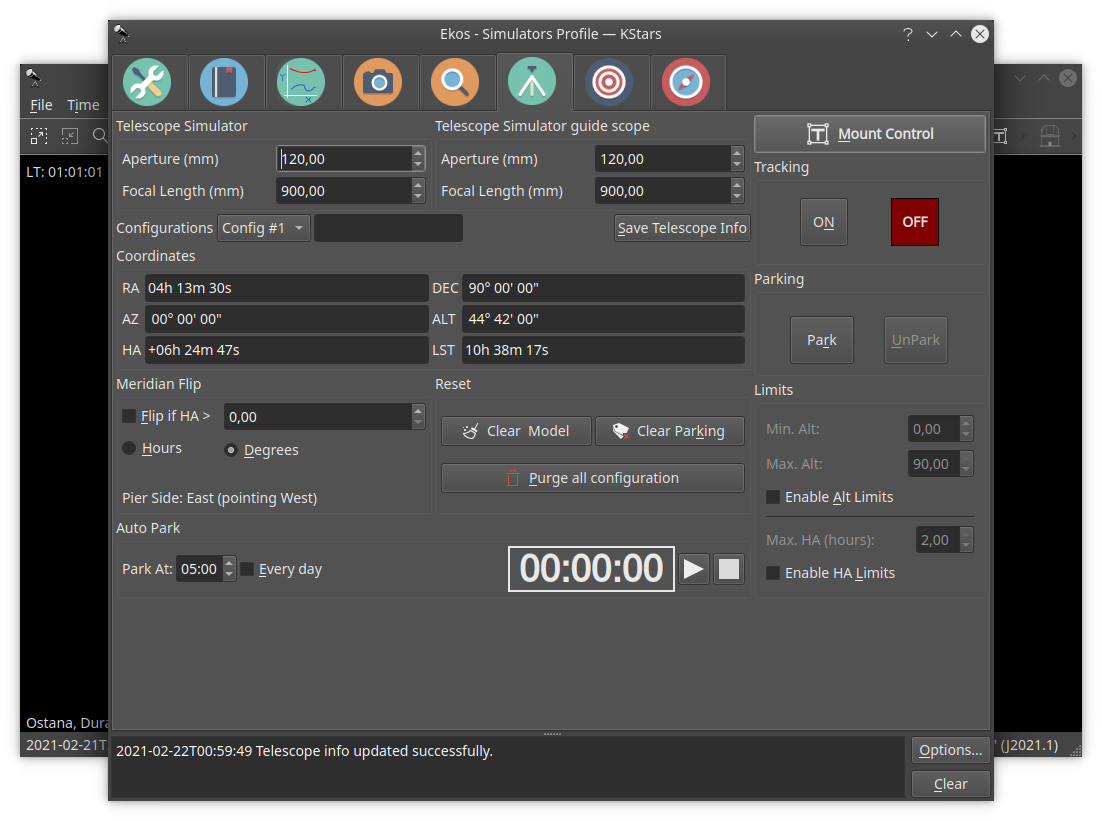 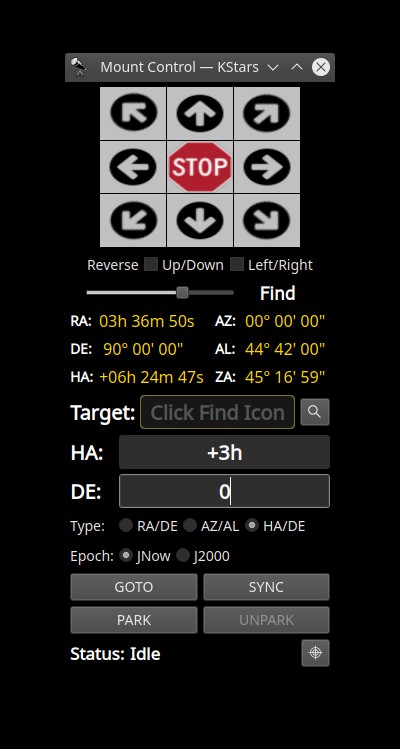 Select the proper celestial coordinates type (RA/DE or AZ/AL or HA/DE). For example, in the figure is selected the coordinate type HA/DE. This type needs Kstars >= 3.5.0 .

Now, the current pointing direction, associated to the given celestial coordinates is acquired by the alignment subsystem as reference point.

As modern computers generally no longer have serial interfaces, a convenient way to make a serial connection to a Celestron scope is to use an USB to serial converter with the proper cable as mentioned in the previous list.

Beware of cheapest USB/serial converters, they have serial lines with TTL levels (+5V,0V). So, they work with AUX port only. Connections to HC and PC ports require a true USB/RS-232 serial converter with symmetric voltage levels (+5V,-5V).

On the other hand old standard RS-232 is symmetric +/-12V signalling should NEVER be connected to the AUX port. Nothing should be connected there without proper level converter. The AUX port is non-standard and connected directly to the bus between all motor controllers and main board. There is an oportunity to burn all scope electronics by connecting wrong signals there.

This type of connection can be used with scopes with WiFi interface like NexStar Evolution or any other Celestron scope equipped with SkyFi Wi-Fi adapter. Except for selecting the TCP connection mode and filling in proper IP address/Port (out of the box it is IP:1.2.3.4, Port:2000). It is well advised to change this default values since they are actually incorrect. The 1.2.3.4 is an actual public IP address assigned to some network in Moscow, Russia (of all places ;) and should never be used for embedded systems in local networks. It is best to switch the scope to AP mode and connect it to your local network or dedicated access point. The rest of the communication functions exactly like over PC/AUX connection, since SkyFi is just a serial-over-ip adapter. 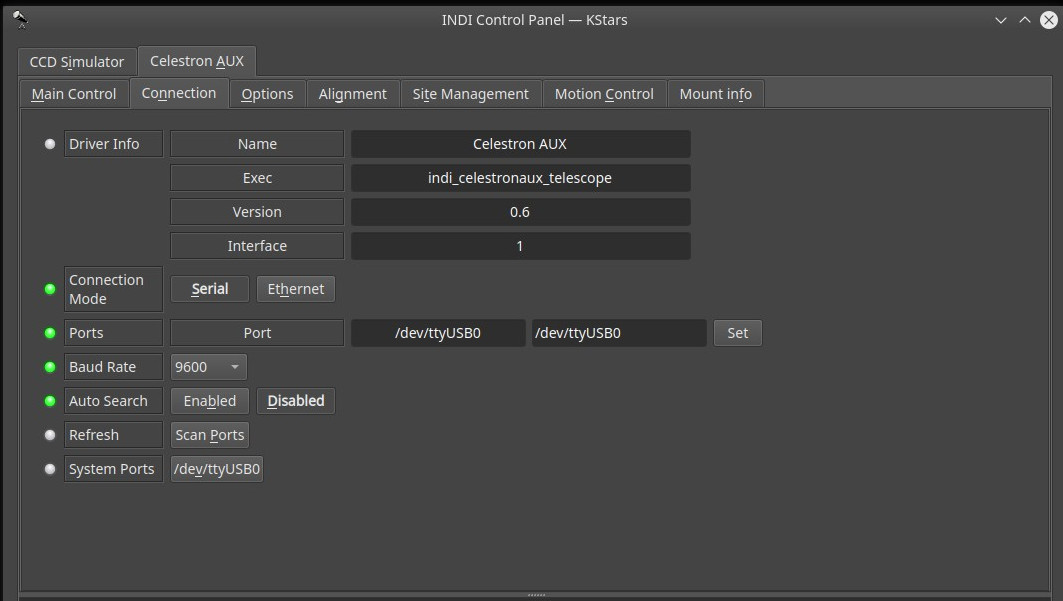 If the controlling system, i.e. a raspberry pi, runs a linux operating system, when more than one USB device are connected, the persistence of USB port number for the same physical USB port is not guaranteed after a system reboot. This problem has two solutions:

Usage of USB port scan is straightforward, you just need to enable it in the Celestron AUX Connection tab. Sometimes, if you have several devices connected to USB, USB scan can fail or can mess up your devices.

The alternative solution of USB static name always works, but it is a little more tricky to set up. Several examples can be found searching over internet for "how to bind USB device under a static name".

There are no known basic functional bugs in this driver, but there are multiple missing features and it is still not as stable as it should. If you found a bug, please report it in (preferably) github issue tracker for the driver or a main INDI project issue tracker. (You can log in with a variety of existing accounts, including Google, Yahoo and OpenID.)