INDI EQMod Driver is released as a 3rd party driver and requires INDI Library >= v0.9.7. To Install the driver under Ubuntu:

This INDI driver interacts with a mount controller using the Skywatcher Protocol through a serial link. It can directly drive Skywatcher and similar mounts through a serial port after a conversion of signal levels (see EQDIRECT interface), or any other mount hardware which uses this protocol. The EQMod driver can also be used with the Synscan controller if PC Direct Mode is enabled in the handset. However, this approach can be problematic and generally not recommended. For wired connections, using EQDirect cable is recommeneded. 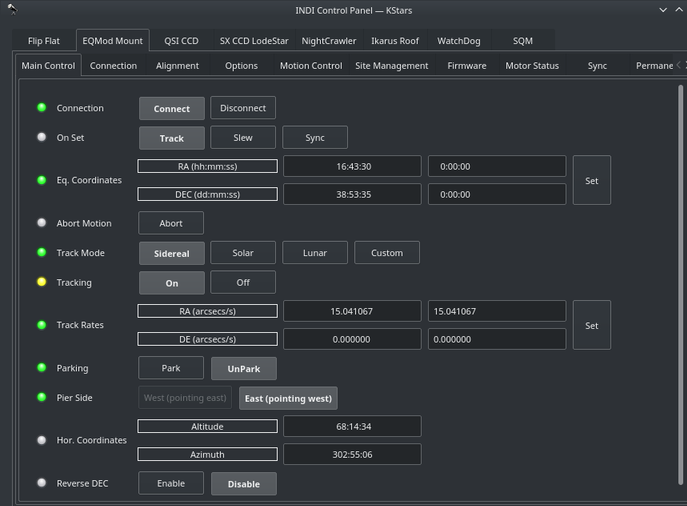 If you plan to use EQMod driver with AstroEQ, make sure to use the latest firmware v8.11+ as prior AstroEQ versions will fail to work with EQMod.

To connect to EQMod mount from a PC or a device like Raspberry PI, it is recommend to get an EQ Direct USB cable (such as those offered by Shoestring Astronomy). This cable provides a direct connection between the PC/Device and the mount.

Many vendors sell USB to RJ45/DB9 EQDirect-compatible cables and adapters. You connect the USB to your computer or embedded device running INDI and then use the driver to control the mount.

For direct USB connections to AZEQ5 Mount, make sure to set the baud rate to 115200

If EQMod is available over the network via RS232-to-Ethernet adapter for example, you can Ethernet connection mode and enter the corresponding IP address and port where the remote server is located.

The device running the EQMod driver (StellarMate/PC) should be connected to the mount WiFi HotSpot. There is no need to use the Synscan App. In the Connection tab, select Ethernet.

For bluetooth adapters, several adapters are avaiable from Shoestring Astronomy and Altair Astro among others. When using Bluetooth adapter, it is highly recommended to remove modemmanager as it interfers with connection with EQMod driver. To remove it, use the following command:

Then you can either use your OS built-in Bluetooth manager to pair with the EQMod Bluetooth adapeter, or you can permenantly bind it by adding the following line to your /etc/rc.local

Replace XX:XX:XX:XX:XX:XX with your Bluetooth adapter MAC Address. To get the MAC address, use the hciconfig command to list bluetooth devices and their correspnding information. 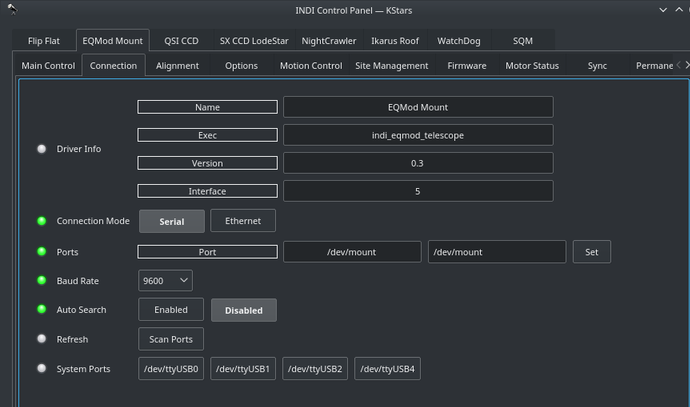 Before starting the driver, power the mount and make sure it is looking at the celestial pole with the weights down.

When running the driver for the first time, go to the Connection tab and select the port to connect to. You can also try connecting directly and the driver shall automatically scan the system for candidate ports. If EQMod is connected the network via a Serial-TCP (Ethernet or WiFi) adapter, then you can select Ethernet mode and enter the IP address and port for the adapter connected to the mount. After making changes in the Connections tab, go to Options tab and save the settings.

Once EQMod is online, it loads mount, alignment, parking, and horizontal limits settings if they exist. Its location defaults to the celestial pole unless a custom parking position is set previously.

The main control tab is where the primary control of EQMod takes place. To track an object, enter the equatorial of date (JNow) coordinates and press Set. The mount shall then slew to an object and once it arrives at the target location, it should engage tracking at the selected tracking rate which default to Sidereal tracking. Slew mode is different from track mode in that it does not engage tracking when slew is complete. To sync, the mount must be already tracking. First change mode to Sync, then enter the desired coordinates then press Set. Users will seldom use this interface directly since many clients (e.g. KStars) can slew and sync the mount directly from the sky map without having to enter any coordinates manually.

Four tracking modes are supported: Sidereal, Lunar, Solar, and Custom. When using Custom mode, the rates defined in Track Rates shall be used. Tracking can be enganged and disenganged by toggling the Tracking property.

Under the options tab, you can configure many parameters before and after you connect to the mount. 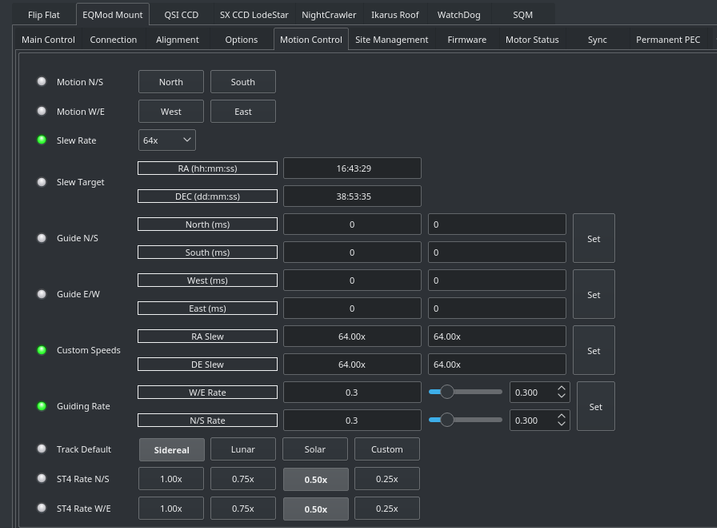 The Slew Rate dropdown is used to control the manual speeds when using the NSWE controls either directly or via a joystick. To set the GOTO speeds (when mount moves from one target to another via a GOTO command), you need to update the Custom Speeds control.

Time, Locaiton, and Park settings are configured in the Site Management tab.

The stepper motors positions and work periods are displayed in addition to the status of each motor. If the mount is equipment with auxiliary encoders, then their position shall be displayed

By default the alignment mode is set to N-Star, every time you perform a sync, a new sync point is added to the model. You need to save the alignment points file if you want the driver to utilize them on the next startup. You can perform all these operations in the Align tab. The EQMod driver is currently transition to the INDI Alignment Subsystem and this section shall be updated when the transition is over to avoid duplicate information.

When using plate solving to refine every slew position it is best to not use the N-Star alignment because the list of point can grow out of necessary making the new point you sync near the target insufficient to influence the pointing result. This make the target to never be centered in the image. In this case it is better to use "sync mode=standard sync" and "alignment mode=nearest point".

PEC training works the same way as with the handcontroller. Guide on a star, engage PEC training and the firmware will wait for the mount pass the worm indexer and then records the resulting speeds in the EEPROM of the motor microcontroller. When it has finished (worm indexer) it toggles a status bit and you can see in the INDI Control panel the status of PEC training becoming green (whereas it remains busy/yellow while training).

PEC/PEC training is enabled in INDI EQMod for mounts which supports it, EQ8, AZEQ5/6, EQ6R too apparently. It is a motor controller firmware feature, the INDI driver just sends the corresponding commands to start/stop PEC/PEC training and do not then bother about it. Please note that the firmware PEC+guiding may not be a good idea as the firmware changes the motor speed unconditionnally, so some guide commands may be lost.

For horizon limit just slew to the points along the horizon you want to set and hit the Add current button. The order of points is significant as Horizon uses a linear approximation between them. When you have finished hit the Write File button (saved in ~/.indi/HorizonData.txt which you can manually edit also).

There are no known bugs for this driver. If you find a bug, please report it at INDI's Github issues page

To use this driver you will need the INDI library installed. To run it there are three ways:
1) Start it with INDIserver using the following command:
INDIserver INDI_eqmod_telescope
2) Use INDIstarter program to start it.
3) Ekos

To control your telescope you could use:
HNSKY
Skychart
Kstars

I have tested 1) and 2) with the Hallo Northern Sky (HNSKY) planetarium program v3.3ß11 and this driver works fine. In the INDI client there are many settings and INDIcator available. As a minimum you have to set in the in the INDI client the following: the serial port, serial speed , time in UTC and your location on earth.

Practical test with HEQ5pro
I used for testing an HEQ5 mount connected with an EQMOD direct cable (USB to serial TTL level) and a Linux system running in VMWare.
TAB “Options”, The default port is: /dev/ttyUSB0 at speed 9600 but you can change and save the port setting in the INDI client. In the INDI client you can also set the time but is seem take time and time zone from the Linux operating system after restart.The INDI client besides UTC doesn’t display your local time but the Julian date and sidereal time which for most people is not understandable. So you better double check the UTC INDIcation. UTC is also used in the messages.

It is important that you set your location in the INDI client correctly !! It only accept your location if you enter an elevation other then zero. If the location is not set correctly, the EQMOD driver will miss the correct Meridian Flip and easily hit your pier !!. This is problem of all equatorial mounts. However the EQMOD driver doesn’t load these settings by itself. You have to do it manually or let the client (planetarium program) do it for you, so better check the location and UTC time before your telescope hits the pier.

- It took 20 to 30 seconds to connect to the HEQ5pro, so be patient.
- While slewing to an object it doesn’t accept any new slew commandos.
- Load of your settings (location) must be done manually or by the client.
- Load doesn’t work in the simulation mode.

For the rest it worked flawlessly.