The EQMod Mount driver is available for download as a 3rd party driver from INDI's download page. Under Ubuntu, you can install it via::

This INDI EQMod Mount driver interacts with a mount controller using the Skywatcher Protocol through a serial link. It can directly drive SkyWatcher and similar mounts through a serial port (see EQDIRECT interface for more details), or any other mount hardware which uses this protocol. The EQMod Mount driver can also be used with the Synscan controller if PC Direct Mode is enabled in the handset. However, this approach can be problematic and generally not recommended. For wired connections, using EQDirect cable is recommeneded.

The INDI control panel exposes data associated with the device and permits parameters to be set. In normal operation, higher level software, such as EKOS, will control the mount, but this document will utilise the INDI control panel GUI to explain the available features.

If you plan to use EQMod driver with AstroEQ, make sure to use the latest firmware v8.11+ as prior AstroEQ versions will fail to work with EQMod.

To connect to the EQMod mount from a PC, Mac or a device like Raspberry PI, use a USB cable (if this is supported by the mount) or a EQDirect USB cable (such as those offered by Shoestring Astronomy).

Many vendors sell USB to RJ45/DB9 EQDirect-compatible cables and adapters. You connect the USB to your computer or embedded device running INDI and then use the driver to control the mount.

For direct USB connections to AZEQ5 or EQ6R Mounts, make sure to set the baud rate to 115200

If EQMod is available over the network via an RS232-to-Ethernet adapter for example, use Ethernet connection mode and enter the corresponding IP address and port where the remote server is located.

For bluetooth adapters, several adapters are avaiable from, for example, Shoestring Astronomy. When using Bluetooth adapter, it is highly recommended to remove modemmanager as it interfers with connection with EQMod driver. To remove it, use the following command:

Then you can either use your OS built-in Bluetooth manager to pair with the EQMod Bluetooth adapeter, or you can permenantly bind it by adding the following line to your /etc/rc.local

Replace XX:XX:XX:XX:XX:XX with your Bluetooth adapter MAC Address. To get the MAC address, use the hciconfig command to list bluetooth devices and their correspnding information.

Before starting the driver, make sure the mount is in the Park position and then power it up. The Park position can be set in the Site Management tab. By default, it is set to the Home position is which the telescope is pointing to the celestial pole with the weights down.

Then start the EQMod Mount driver. Once the driver is online, it will load the mount configuration.

When running the driver for the first time, go to the Connection tab and select the port to connect to. You can also try connecting directly and the driver will automatically scan the system for candidate ports. If EQMod is connected the network via a Serial-TCP (Ethernet or WiFi) adapter, then you can select Ethernet mode and enter the IP address and port for the adapter connected to the mount. After making changes in the Connections tab, go to Options tab and save the settings. 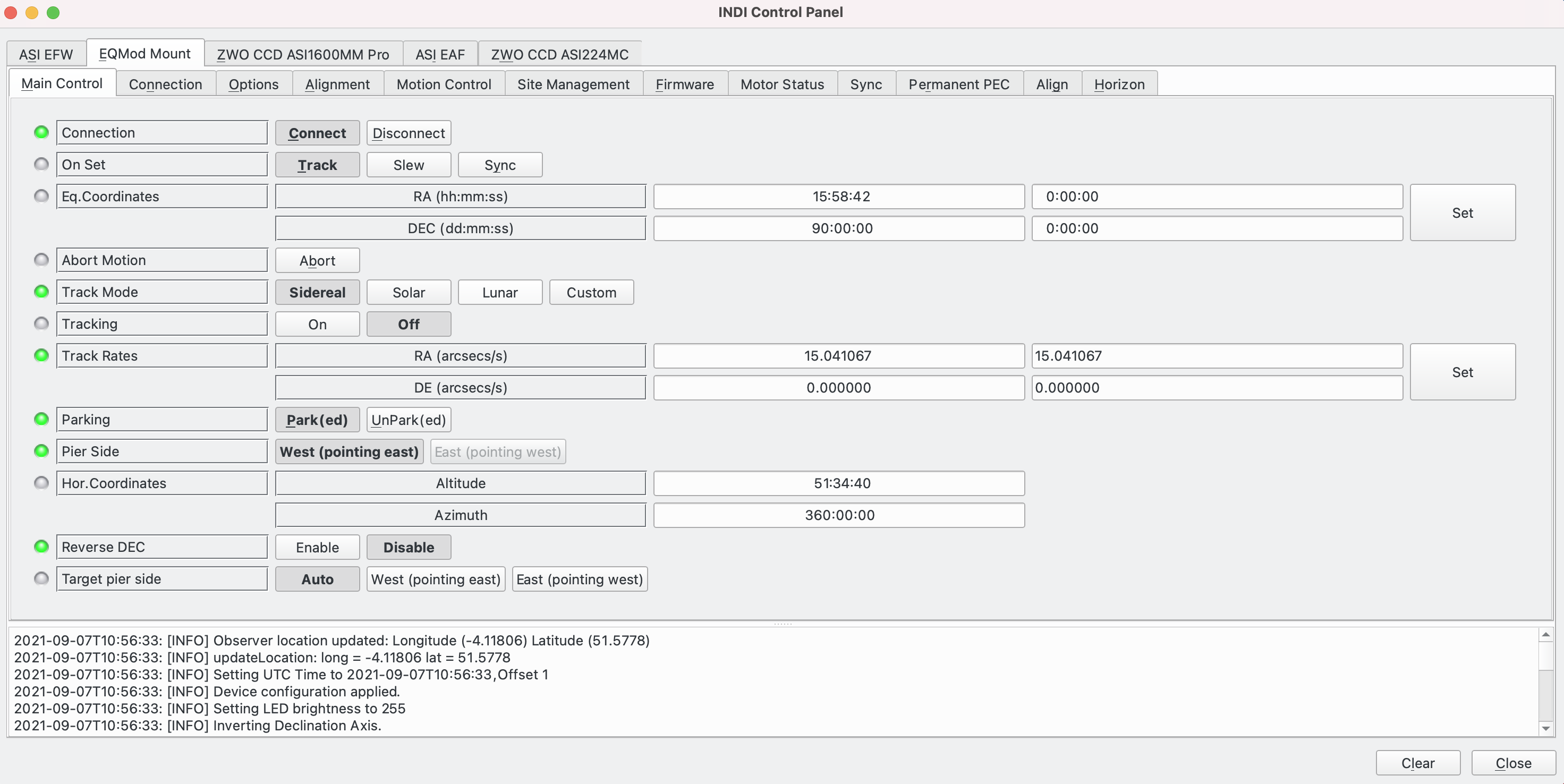 The Main Control tab is where the primary control of EQMod takes place. Users will seldom use this interface directly since most people will use powerful software such as Kstars/Ekos above the EQMod Mount driver to slew and sync the mount directly from the sky map without having to enter any coordinates manually. However, if necessary, control of the mount can be done from here: 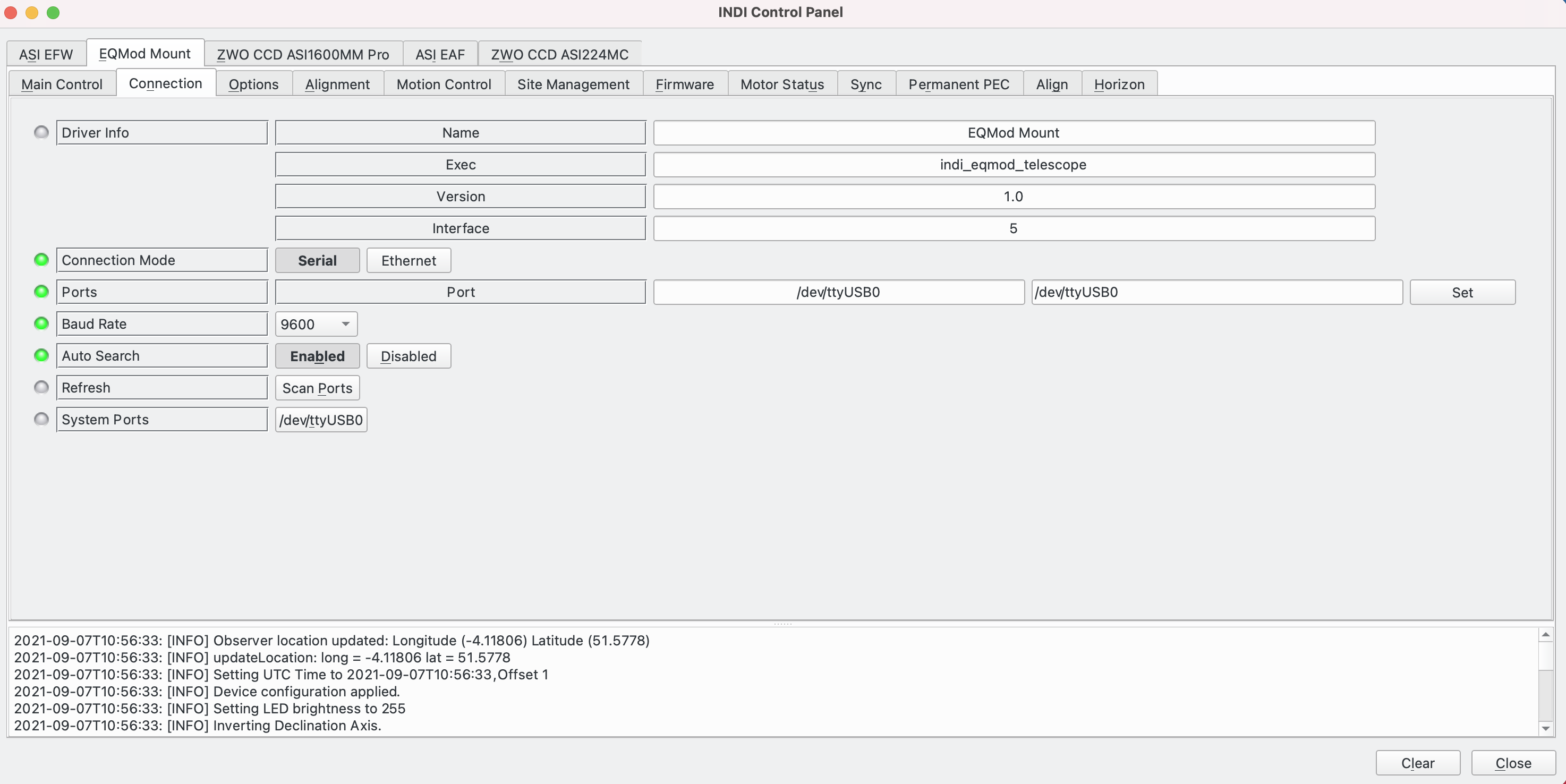 The Connection tab shows information related to the connection of the Eqmod Mount driver to the mount. 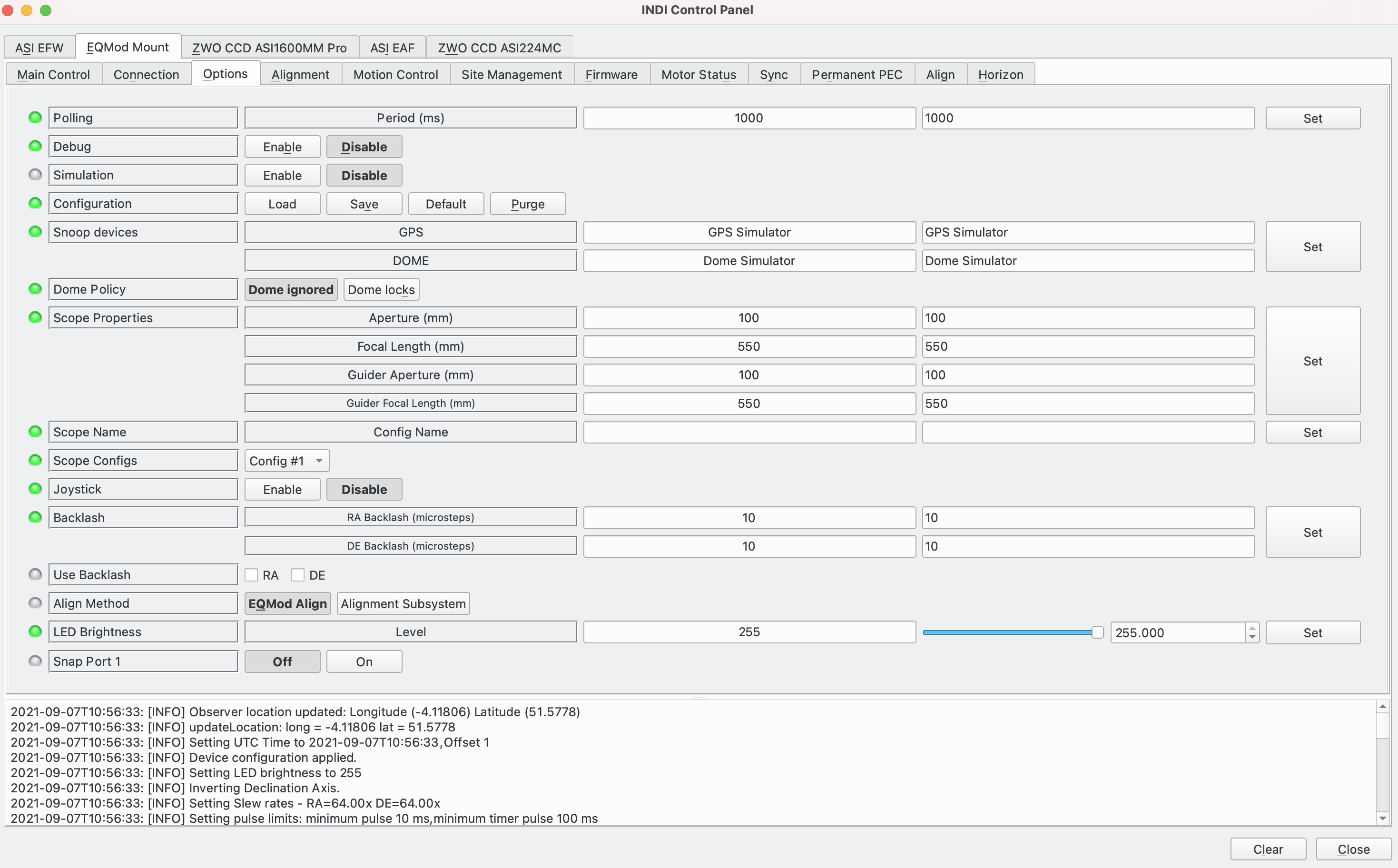 The Options tab, allows configuration of many parameters before and after you connect to the mount.

The Alignment tab displays information about alignment points. As this repeats data on the Align tab, please see the Align tab section for more details. 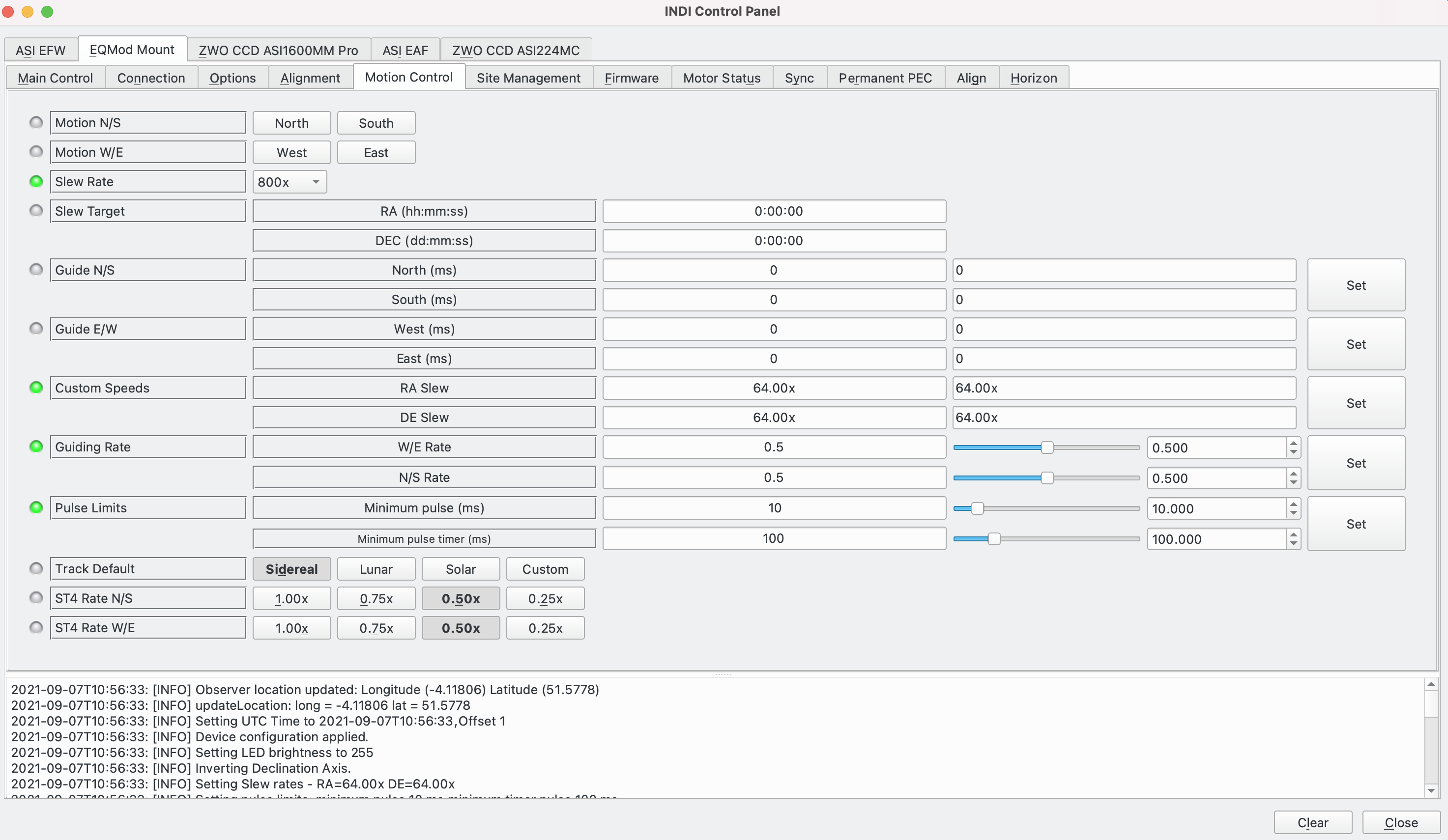 The Motion Control tab allows motion control parameters to be displayed and set:

The Site Management tab displays and sets information about the telescope's location.

IMPORTANT: It is important to understand the difference between the Home position and the Park position: 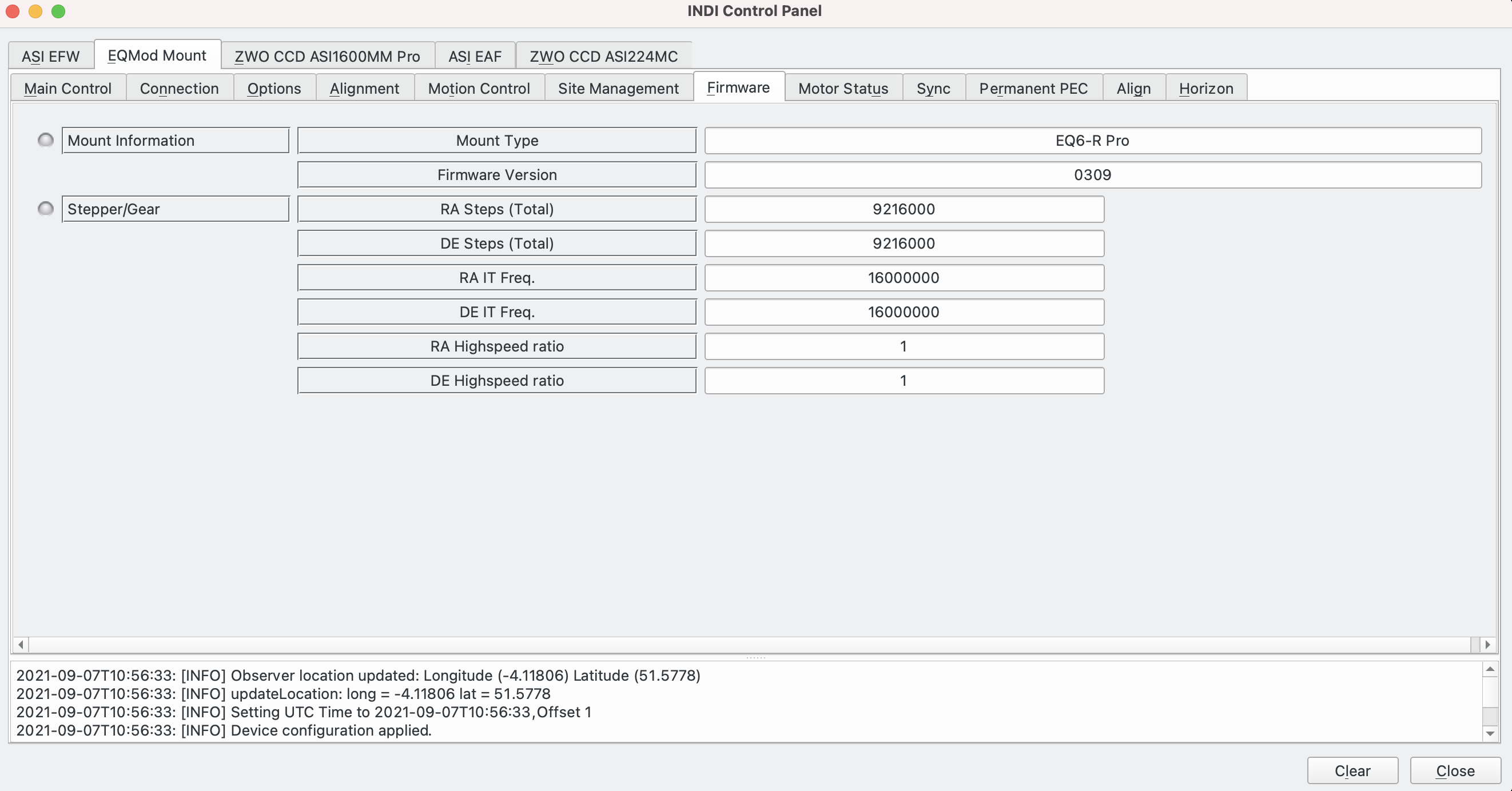 The Firmware tab displays information on the mount and firmware controller: 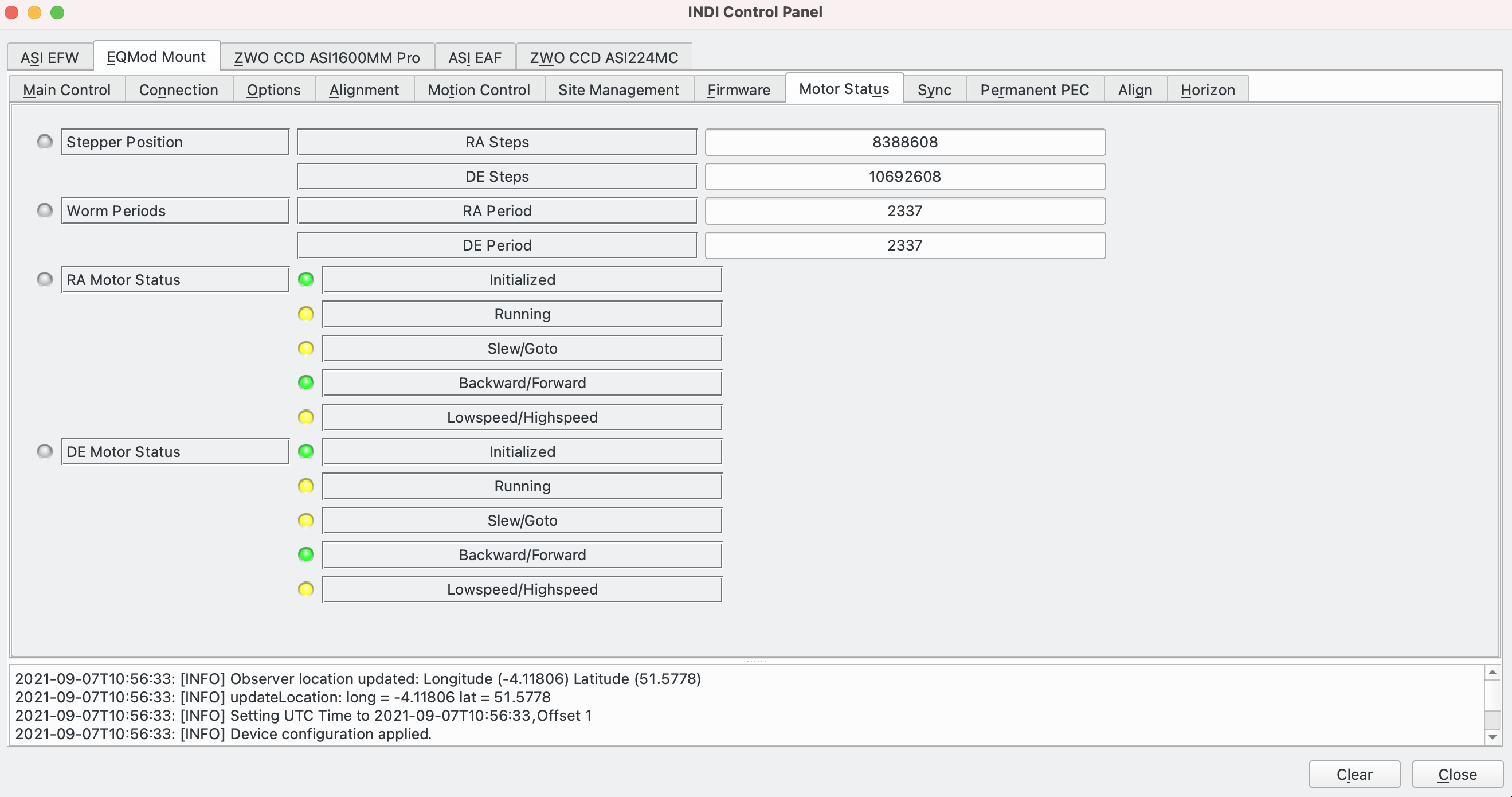 The Motor Status tab displays information about the mount stepper motors in RA and Dec: 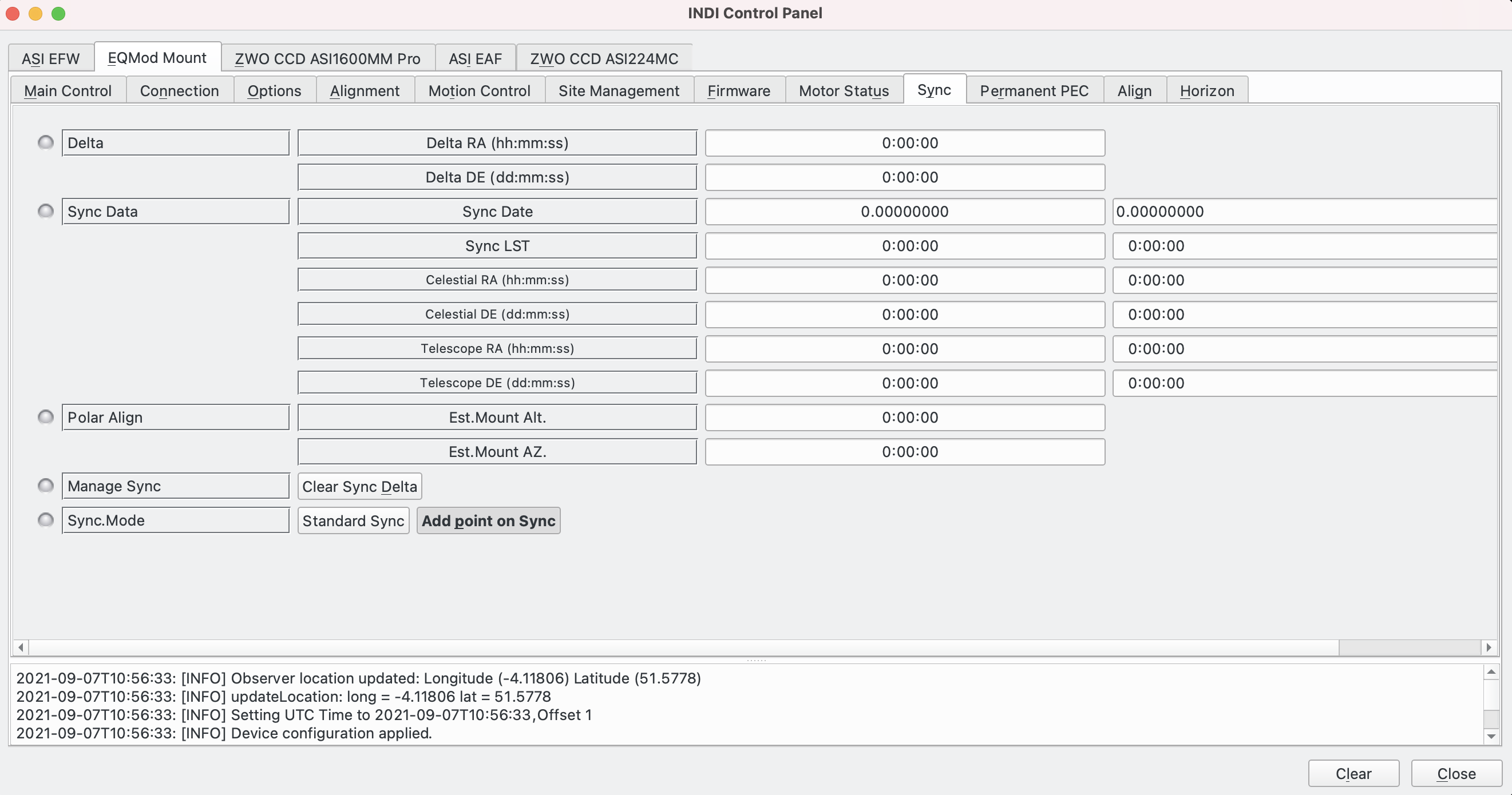 The Sync tab displays information about alignment points. As this repeats data on the Align tab, please see the Align tab section for more details. 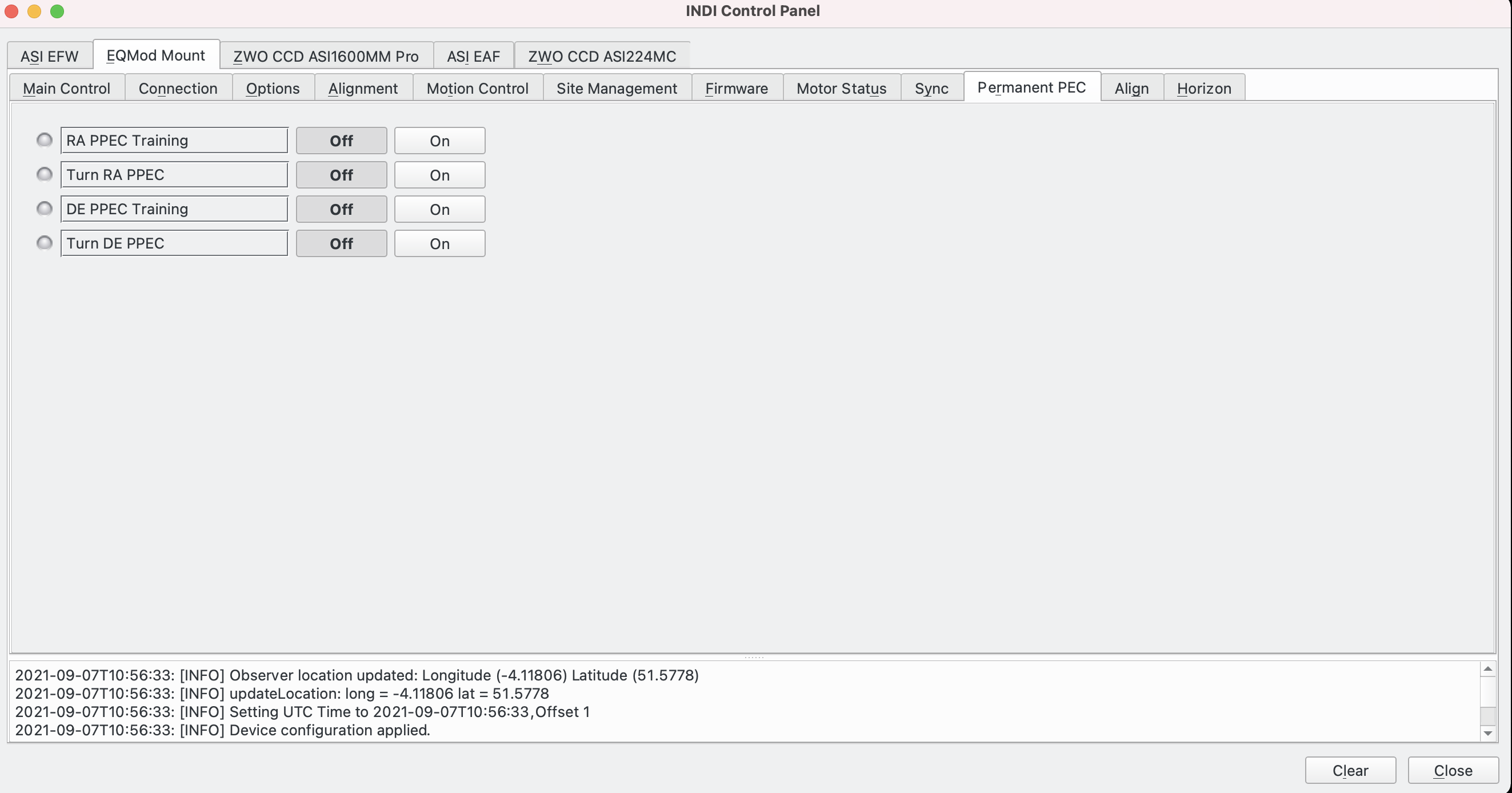 PPEC is normally only used on the RA worm.

PPEC is a complicated subject. INDI exposes the above mount functions but note that to effectively use PPEC requires many more steps and an understanding of how it works with your specific mount and what the constraints are (for example, to keep the stepper motor synchronised to the PPEC data). A good resource for more details on this topic can be found at The EQMOD Project.

The Align tab displays information about the alignment of the mount:

For background information on alignment models the EQMOD project has a useful document here.

N-Star alignment is the most accurate method of performing "gotos" standalone. When using plate solving, however, a very accurate goto is not required as plate solving refines every slew position iteratively to home in on the target. In this case it is better to use Nearest Point. 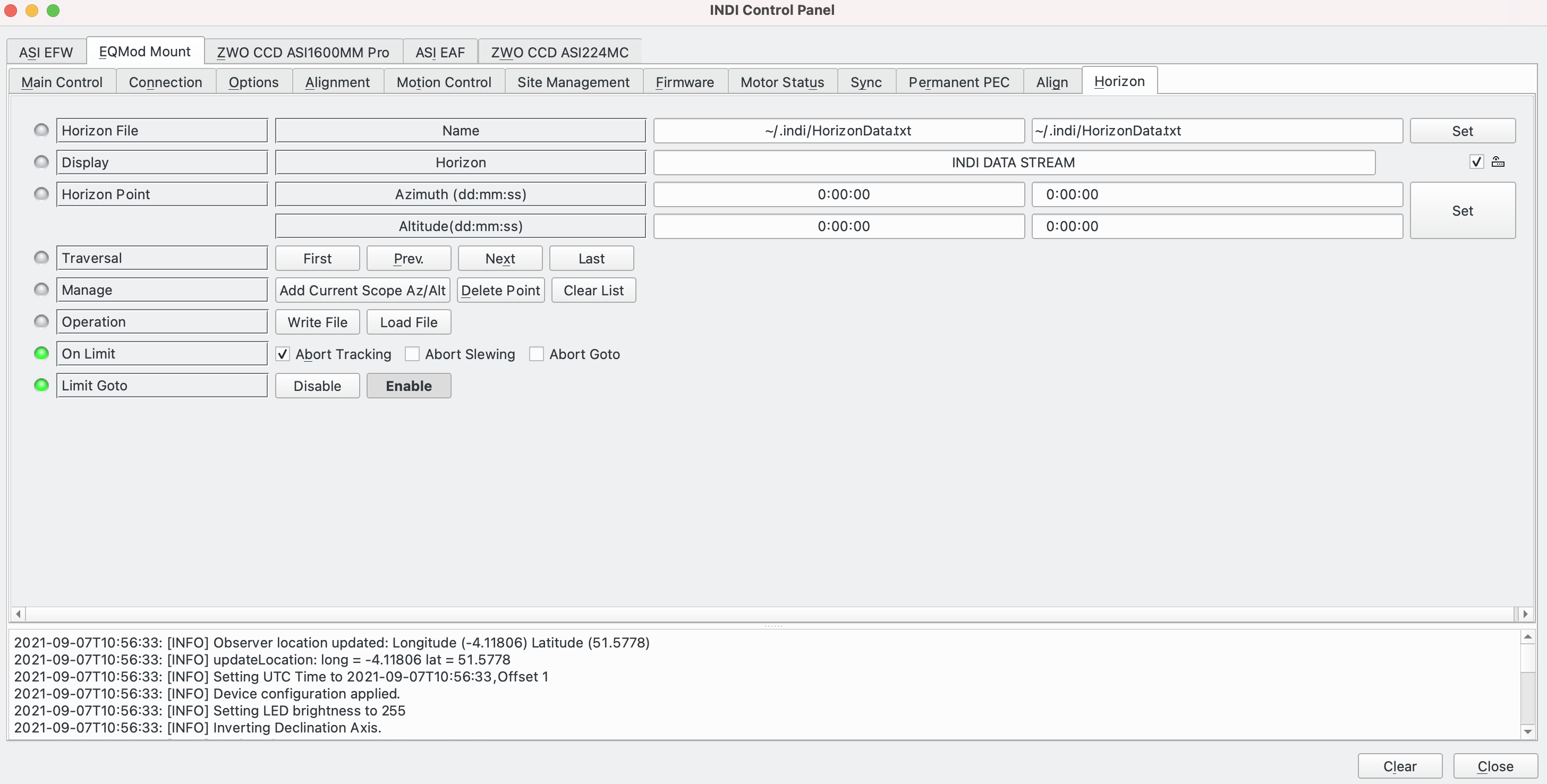 The Horizon tab displays and sets data associated with defining an artificial horizon for your observing location. To use, slew to the points along the horizon you want to set and hit the Add Current Scope Az/Alt button. The order of points is significant as Horizon uses a linear approximation between them. When you have finished hit the Write File button. The data is saved in a text file that can also be manually edited.

The current list of outstanding issues can be viewed at INDI's Github issues page. If you find an issue please report it on the Indilib forum and remember to include the logs (details on how to do this here).

connect indi with Skywatcher EQM 35
Solutions to connect indi with Skywatcher EQM 35
After installing indi-bin, indi-eqmod and adding user to group dailout it is necessary to find the right connection to the mount.
Start the mount and align it, for testing it is enough to do it without a star. Take the handheld SynScan V4 and connect it to PC-USB
1) Use the INDI-server with the module SynScan - ready
2) By using PC-Mod on the handheld use the module EQMod for INDI-server - also ready