INDI GPS driver is included available as 3rd party driver. Under Ubuntu, you can install the driver via:

INDI GPS driver requires Linux GPSD service to be running. To install it under Ubuntu:

A GPS device is also required. Many devices are support, please check the hardware compatiblity page before purchasing a GPS device and make sure the GPS device is supported under Linux. The U-Plox AG GPS available from Odroid is one example of a comptabile device. Depending on the device, you might need to edit /etc/default/gpsd file and edit the DEVICES= section to add the serial port for your GPS device there (e.g. /dev/ttyACM0).

Make sure GPS is receiving data by running gpsmon 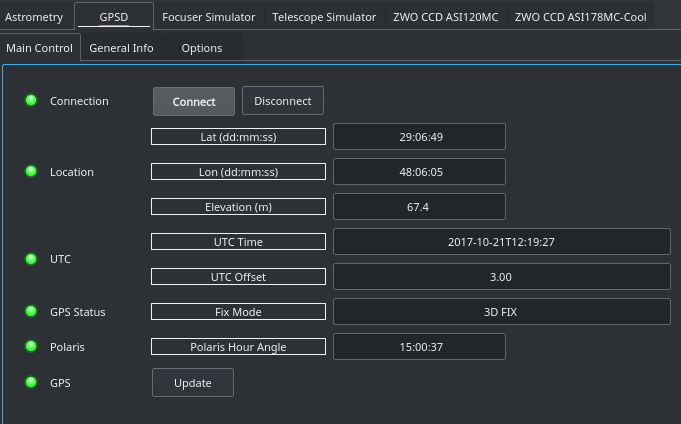 Upon connection, it should take a few seconds before the GPS fixed is usually obtained. Depending on your client, you might need to configure it to synchronize it with GPS data with the mount and other devices. KStars performs this synchronization automatically without requiring any further action from the user.