Bee Focuser driver is included as a 3rd party driver. Under Ubuntu, you can install the driver via:

Beefocused is an Open Source Hardware/ Software Telescope Focuser The goal of the project is to create a high quality DIY focuser that's relatively easy to build and modify. It is fully open sourced.

The Beefocused Indi driver has a "Simulation" mode that's very close to what you'll see if you use the actual hardware. Simulation mode is selected by going to the BeeFocused connection tab and selecting a Simulated connection 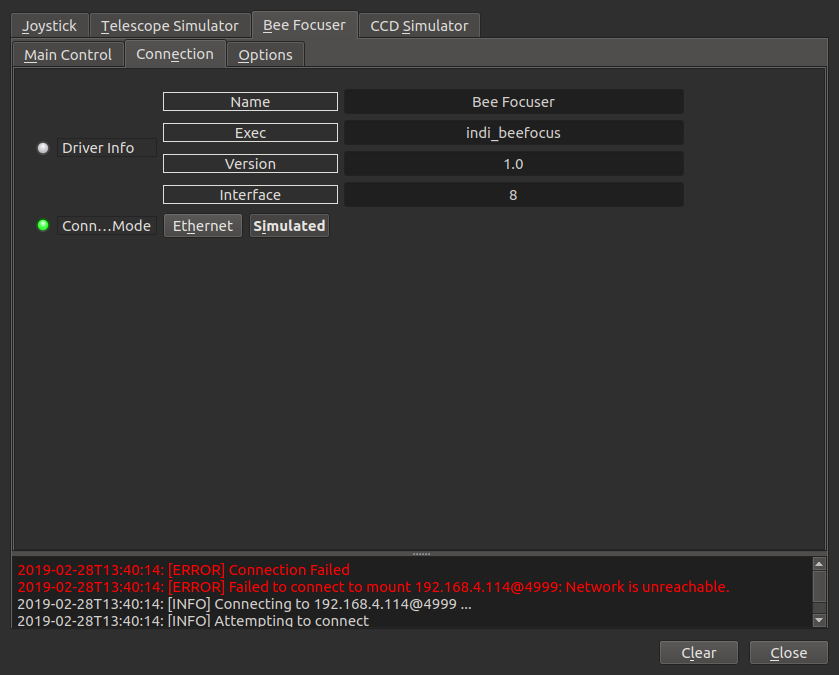 You'll need to go to the Main focuser menu and "connect" to the Simulated Focuser, the way you'd connect to an actual focuser. 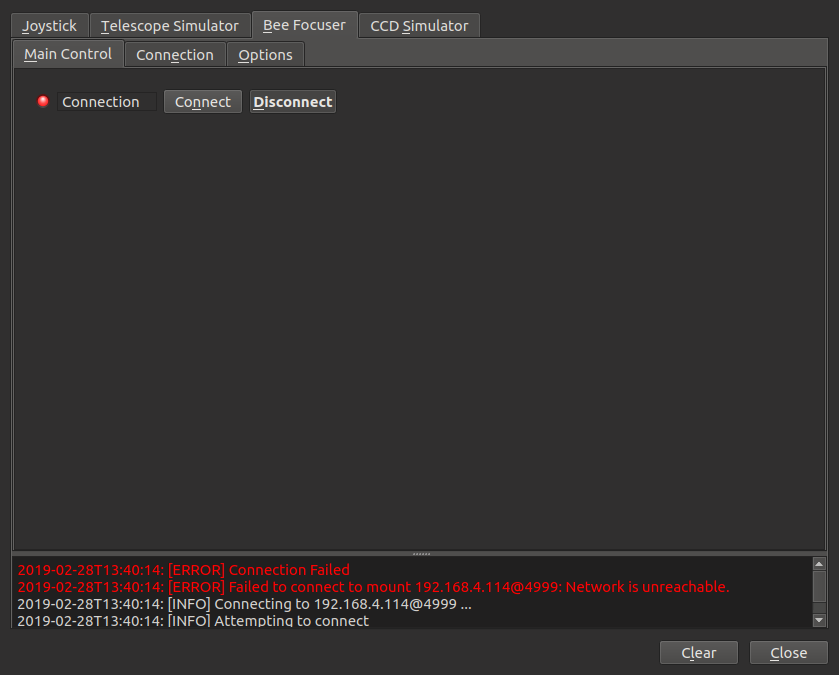 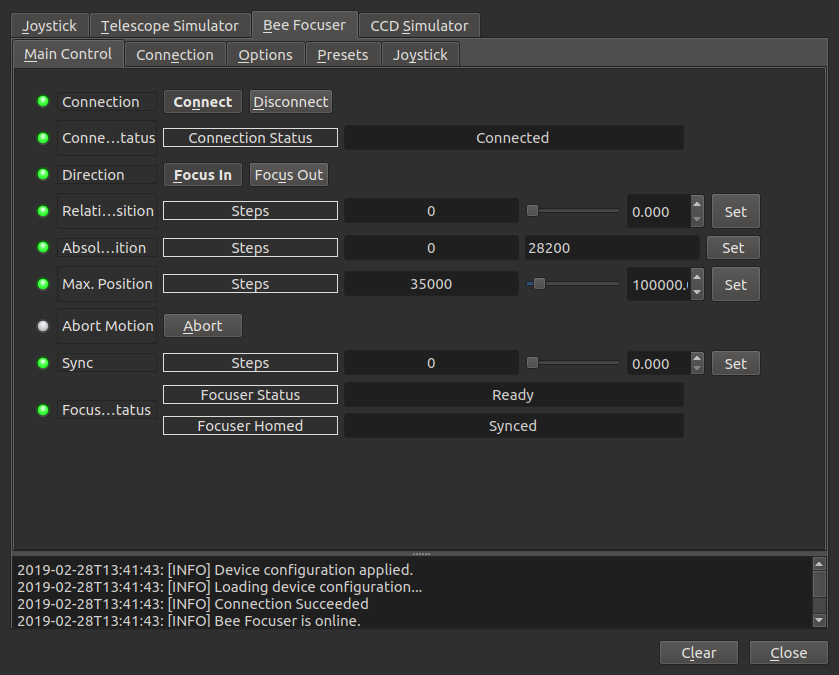 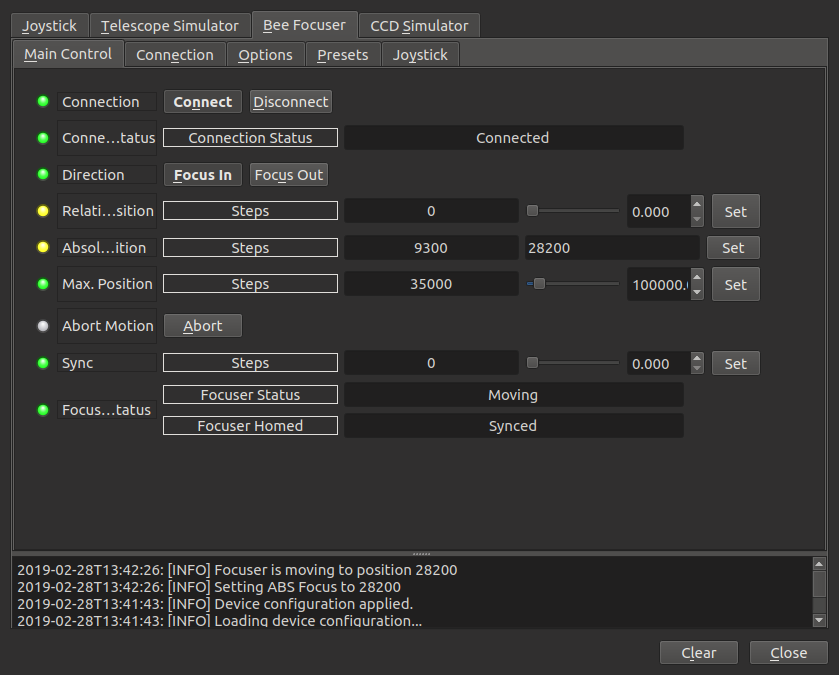 A move can be interrupted by pressing the Abort button. If you try to move the focuser past the Maximum Position the driver will generate an Error message 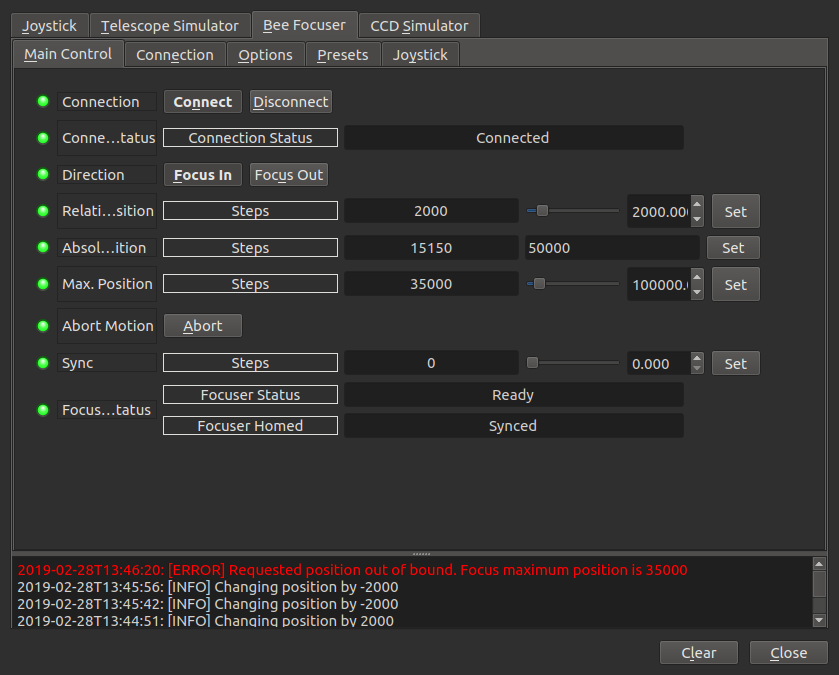 If the focuser's hardware supports a home switch the focuser will automatically move to it's home, or zero position, the first time INDI connects. The sync switch can also be used to set the Focuser's current absolute position. In this example the Sync switch is used to reset the absolute position to 2000. 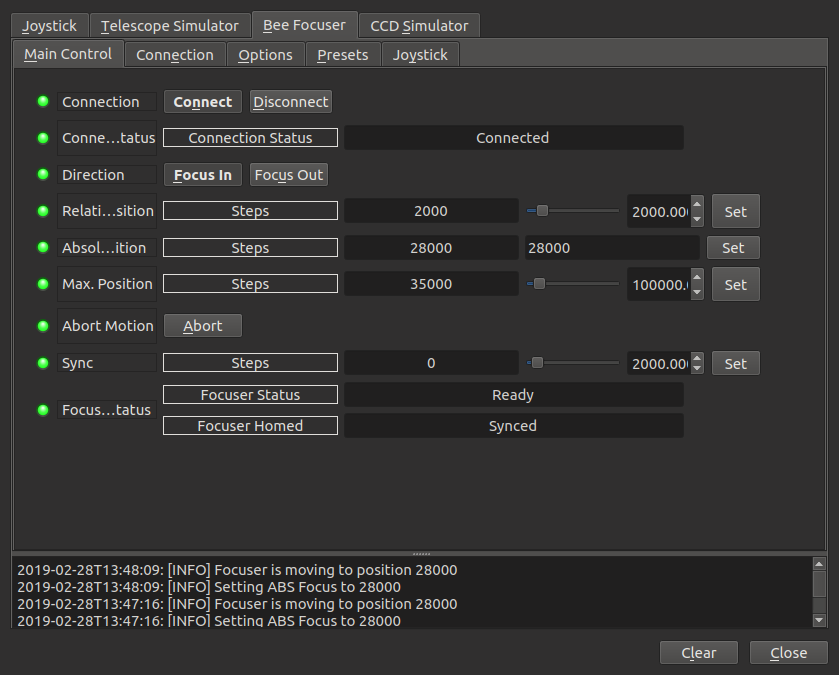 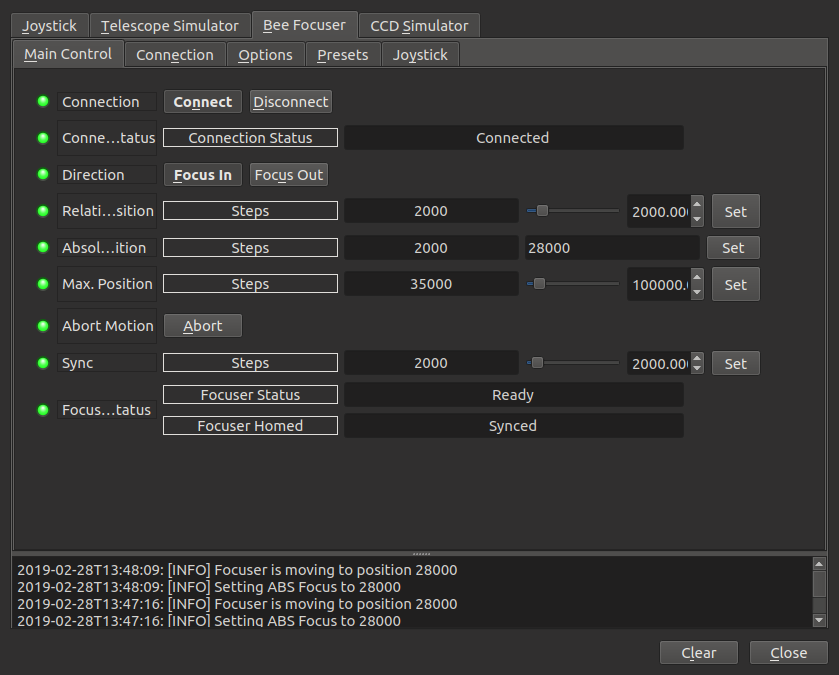 The focuser can move relative to it's current position. In this mode the user changes the Relative Position field number to the number of positions they want the focuser to move (2000 in this example) and presses set. Pressing Set again will cause the focuser to move again. 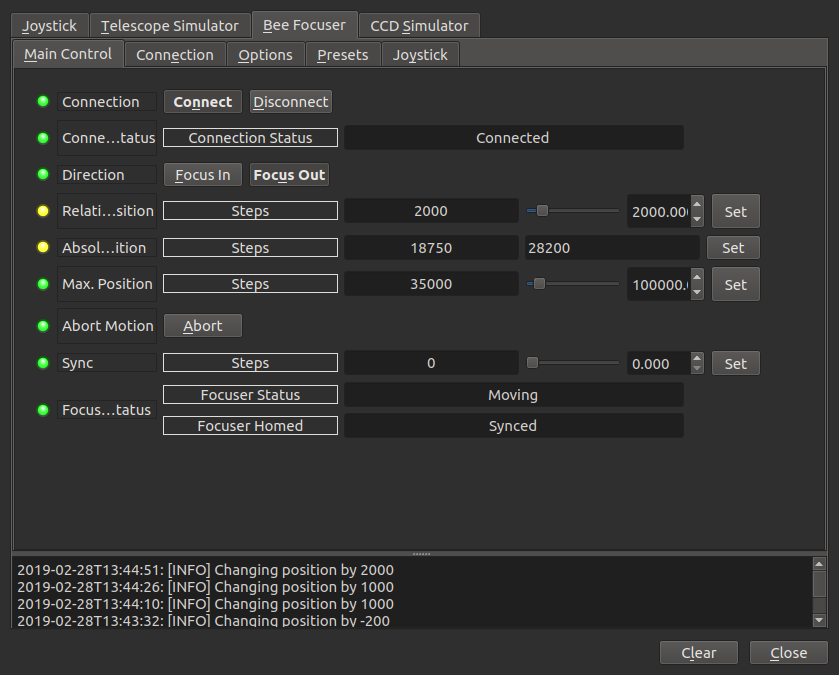 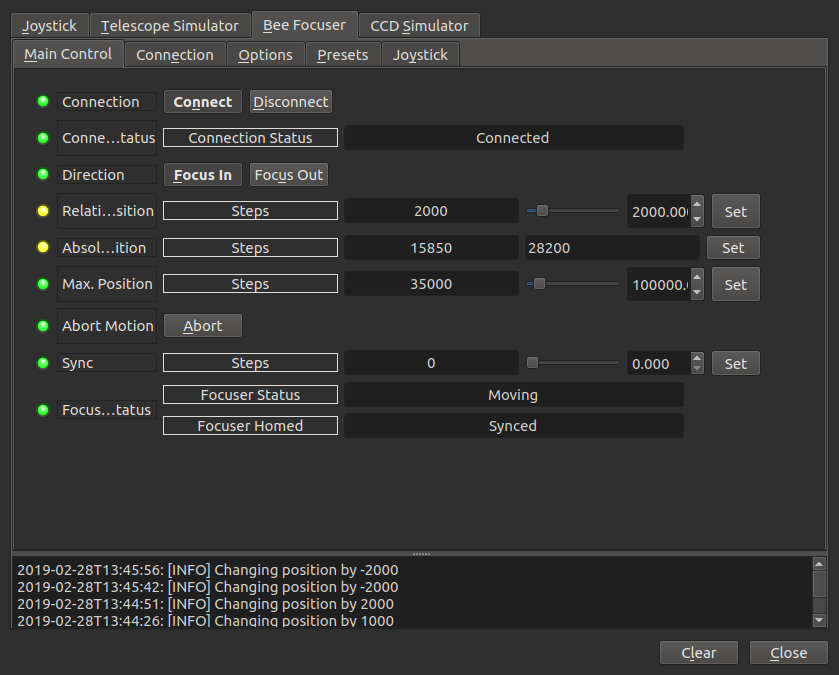 A game controller is a convenient way to manually operate the focuser. To use the game controller, set a relative focuser movement rate that works for setup (100 was good for me), turn on Joystick in the Options Tab 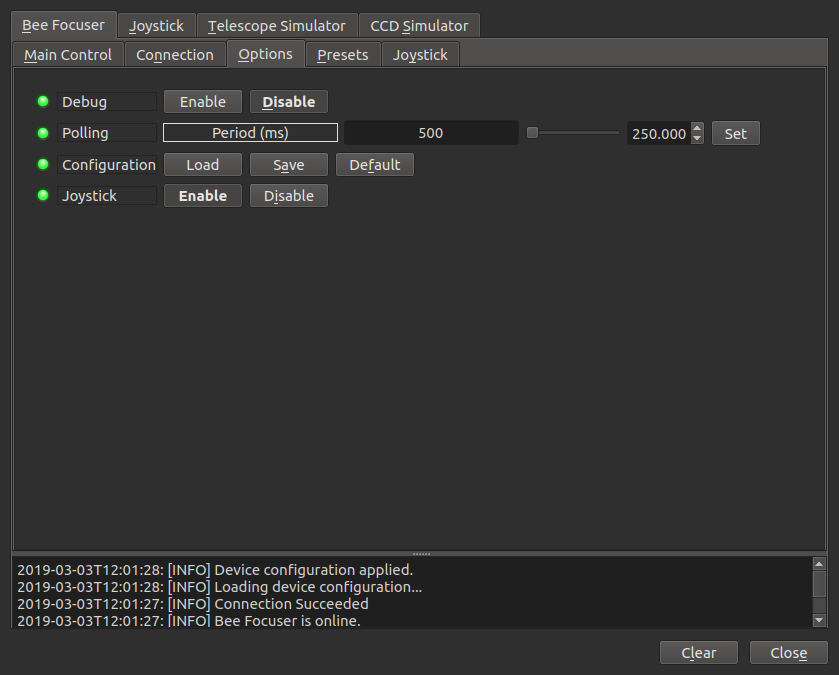 And set-up the Joystick Buttons in the Joystick TAB. I used the bottom buttons on my game controller to focus in and out (BUTTON_7 and BUTTON_8), and the "A" button to Abort (BUTTON_2). 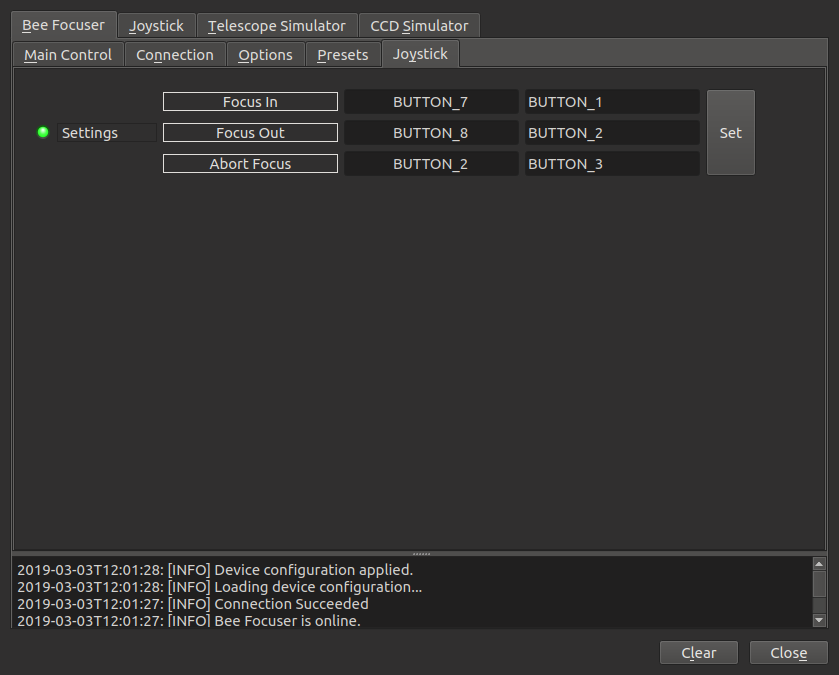 I know that absolute position 28000 is close to my telescope's focal point, so I've added a 28000 entry to the Presets tab. 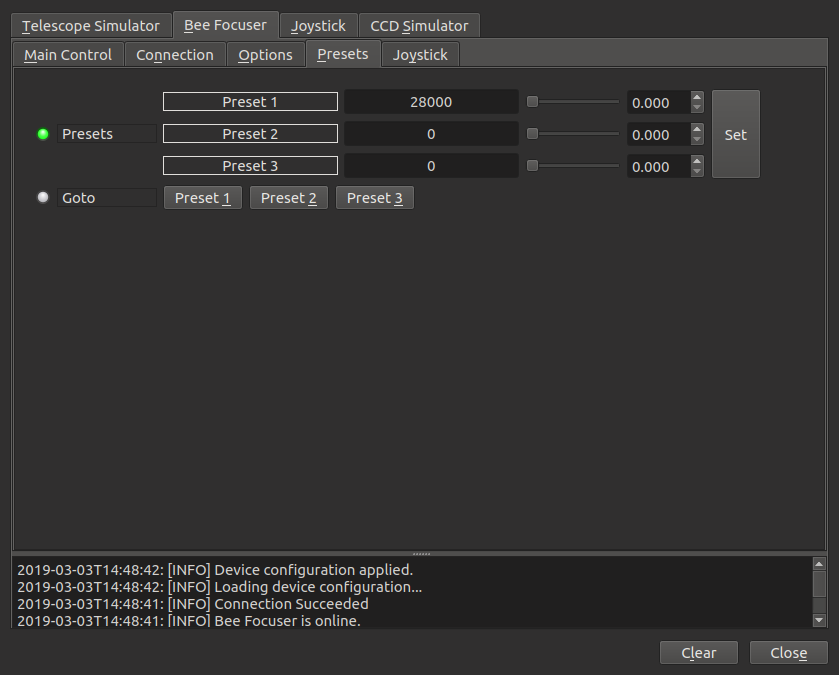 To connect to the actual focuser, switch the connection type to ethernet and enter the address of the focuser. The port is always 4999. 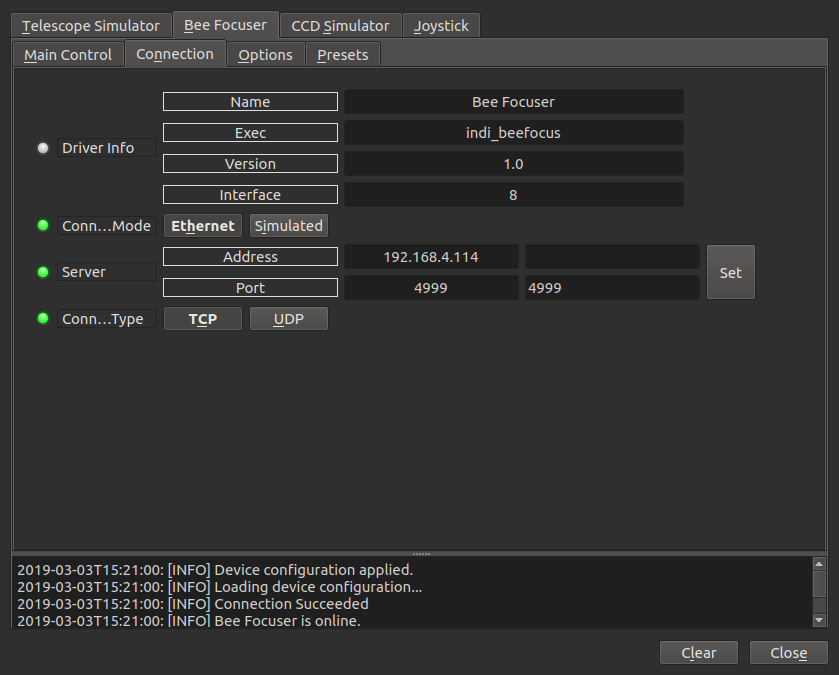 The main control tab of the actual focuser and simulated focuser are the same. 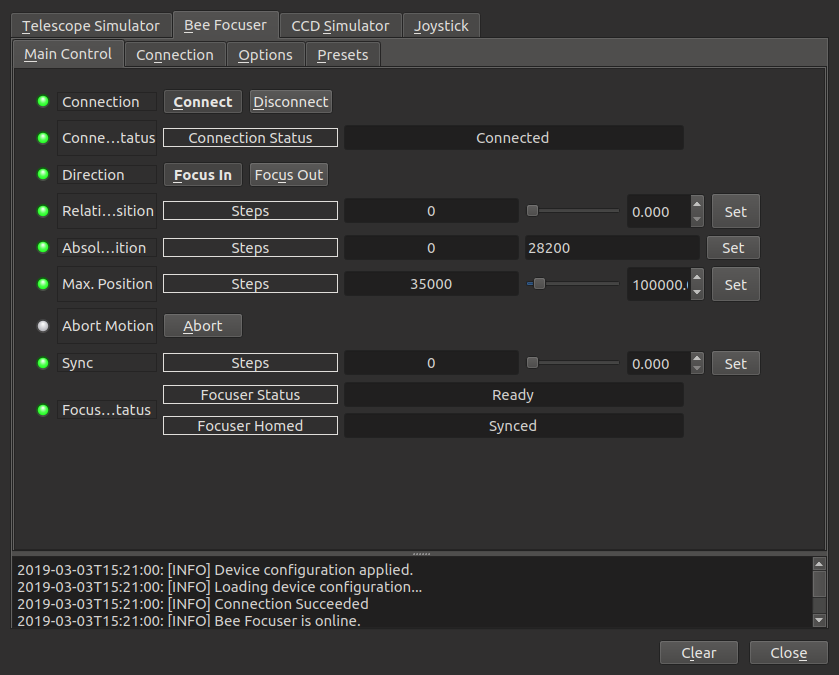