Is thre any good User Interface documentation for INDI? As a new user, I find that many of the screens in the INDI Client are bewildering and unclear.
For example, in the attached screenshot of the Svbony-305 INDI settings in INDIClient, I find these questions:

I am supposing that Video Stream/Stream On or Stream Off are playback functions where Video Record/Record On/Off recording functions, but this is not explained. And then Video Record/Record(Duration) and how it might differ from Record On is nowhere explained, nor is Record(Frames).

I can only assume from the lack of edit controls that FPS is a read/only readout while recording (and/or streaming?) is occurring, but this is not explained. It seems you would not look here to change the number of frames per second.

Similar questions occur on every page. For example, on the WCS tab, well, my apologies for being a noob, but what IS WCS?

Also, the placement of "Set" buttons can be confusing. Sometimes a "Set" button refers to the setting immediately to its left, other times it refers to a group of settings to its left and below, and it is not always clear what is being set. Some narrow box lines around groups of settings would be a good thing.

But thanks for INDI, please don't let my complaints seem like gripes. I'm very glad that INDI exists. I might even want to a contribute to it once I advance beyond my noob stage. 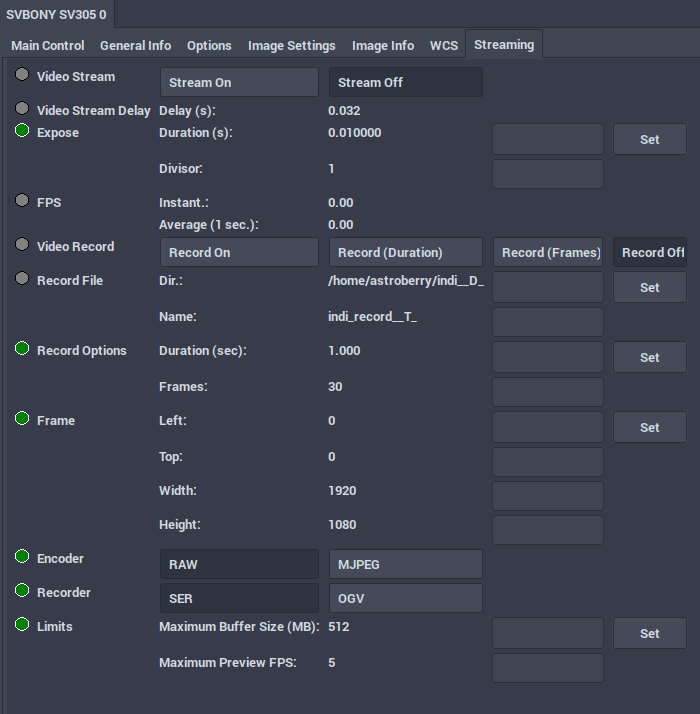 Replied by Ken Self on topic INDI User Interface Documentation

Hi Steve
The INDI Control Panel is a low level interface to the device driver and much of what is on it reflects the coding interface to the device. The layout is largely auto-generated and terminology is almost entirely up to the developer of the driver. Every driver is different so documenting them would be very difficult. There is good documentation aimed at the developers of device drivers.
Some parts of the interface are standardised so that applications like EKOS can wotk with devices from multiple suppliers.
If you are using EKOS (or indeed any other application) you normally would not need to use the INDI control panel much, if at all, as EKOS would send the required settings to the driver and these would show up in the control panel.
As to the specifics of the SVBONY control panel I would interpret it as follows:
Stream On/Off means the video is displayed on screen but is not saved to a file.
Record saves the video to a file.
Record On starts recording until Record Off is used.
Record (Duration) records for the specified number of seconds or until record Off is used.
Record (Frames) records the specified number of frames or until Record Off is used.
Whether FPS is controllable or not depends on the device capabilities. In this case it looks like you set the exposure time and the device decides the frame rate.
WCS is World Coordinate System. As I recall it is used to save RA and Dec in the FITS header when you are imaging. The WCS tab lets you enable or disable this standrad feature.
-- Ken
RPi3 Ubuntu Server 20.04, Windows 10 AMD64, AAEON UP Core Ubuntu Desktop 20.04
Avalon M-Uno, EQ6 Pro, Atik420, ASI1600MM-C, ASI120MM-S, DBK21AU04, ZWO EFW, Optec TCFSi
Vixen R150S, GSO RC8, ST80
The following user(s) said Thank You: Steve Cohen
5 months 2 weeks ago #83730

Thanks, Ken. This is more or less what I thought about the settings.

I have been using CCDCiel, in that application the Video tab has a few settings, but has a "More Settings" button that I believe delegates to the Indi Client settings page - it looks identical and changes made in one populate to the other.
5 months 2 weeks ago #83731

And does anyone know what the “Divisor” setting on the screen shot above does?
5 months 2 weeks ago #83736