Has anyone tried this or interested in giving it a try and sharing experiences?

Why bother? Well I have been having issues with intermittent crashing of Kstars/EKOS on Windows. Unfortunately there is currently no debug facility for EKOS under windows.
So I thought I would see if I could get it to run under WSL either for reliability or to enable debugging with ekos debugger. This approach may also work on low powered Linux devices which would not need to run the overhead of a full GUI desktop environment. The setup and operation would be slightly different then.

You need to enable WSL in Windows. I suggest using WSL1 for now as WSL2 works a bit differently. I installed Ubuntu 18.04 a while back and upgraded to Ubuntu 20.04 but you install Ubuntu 20.04 directly now I believe.

You need an X-server in Windows. I found vcXsrv seems to work best. sourceforge.net/projects/vcxsrv/
Some good instructions at seanthegeek.net/234/graphical-linux-appl...-bash-ubuntu-windows
Run xlaunch.exe to set up the X11 serve. Save the configuration file to %appdata%\Microsoft\Windows\Start Menu\Programs\Startup
so that vcXsrv runs automatically. When vcXsrv is running there is an X icon in the system tray

Open up a WSL session and install x11-apps. x11-apps installs some small graphical apps which are useful while getting X11 forwarding to work e.g. xeyes, xclock
<code>sudo apt install x11-apps
</code>
Edit the sshd configuration
<code>sudo nano /etc/ssh/sshd_config</code>
Make sure the following parameters are uncommented and have the values shown. For AllowUsers set it to the username you set up for WSL
Port 2200 is needed instead for the usual ssh port 22 because that is already used by Windows ssh

Restart the SSH service with the new parameters
<code>sudo service ssh --full-restart
</code>
Set the display for X11 for just this session
<code>export DISPLAY=localhost:0.0
</code>
or for all sessions
<code>echo "export DISPLAY=localhost:0.0" >> ~/.bashrc
. ~/.bashrc
</code>
Check that it is set with
<code>echo $DISPLAY
</code>
Test with xclock. You should see a clock window show up
<code>xclock</code>

My experience so far has been promising. Before applying some of the fixes above I had Kstars running successfully, moving the mount, focussing, plate solving and previewing. It crashed with a seg fault when the first capture completed but I have not yet reproduced that. Subsequent captures have worked. The mount popup does not display properly. It seems to show whatever was underneath it when it was created. Also, on one install kstars did not create the profile database so I copied an existing one. But on a subsequent install it started up with the profile wizard and everything worked as expected.
-- Ken
RPi3 Ubuntu Server 20.04, Windows 10 AMD64, AAEON UP Core Ubuntu Desktop 20.04
Avalon M-Uno, EQ6 Pro, Atik420, ASI1600MM-C, ASI120MM-S, DBK21AU04, ZWO EFW, Optec TCFSi
Vixen R150S, GSO RC8, ST80
The following user(s) said Thank You: Eric
Last edit: 1 year 1 week ago by Ken Self. Reason: typo in code
1 year 1 week ago #65670

I can run ekosdebugger on WSL and the only issue is that the button graphics don't display. I havent yet induced any crashes. That will only happen if I'm doing real imaging of course.

I also tried X11 forwarding with kstars on my RPi3. This also works and is arguably simpler as the error workarounds are not needed. Still needs vcXsrv on Windows and it also needs PUTTY on windows to perform the X11 forwarding. Apparently the update to Openssh on Windows to enable this was not in the latest release otherwise it would be possible with Powershell or cmd.exe

With the Rpi3 the Mount control box displays correctly unlike on WSL. 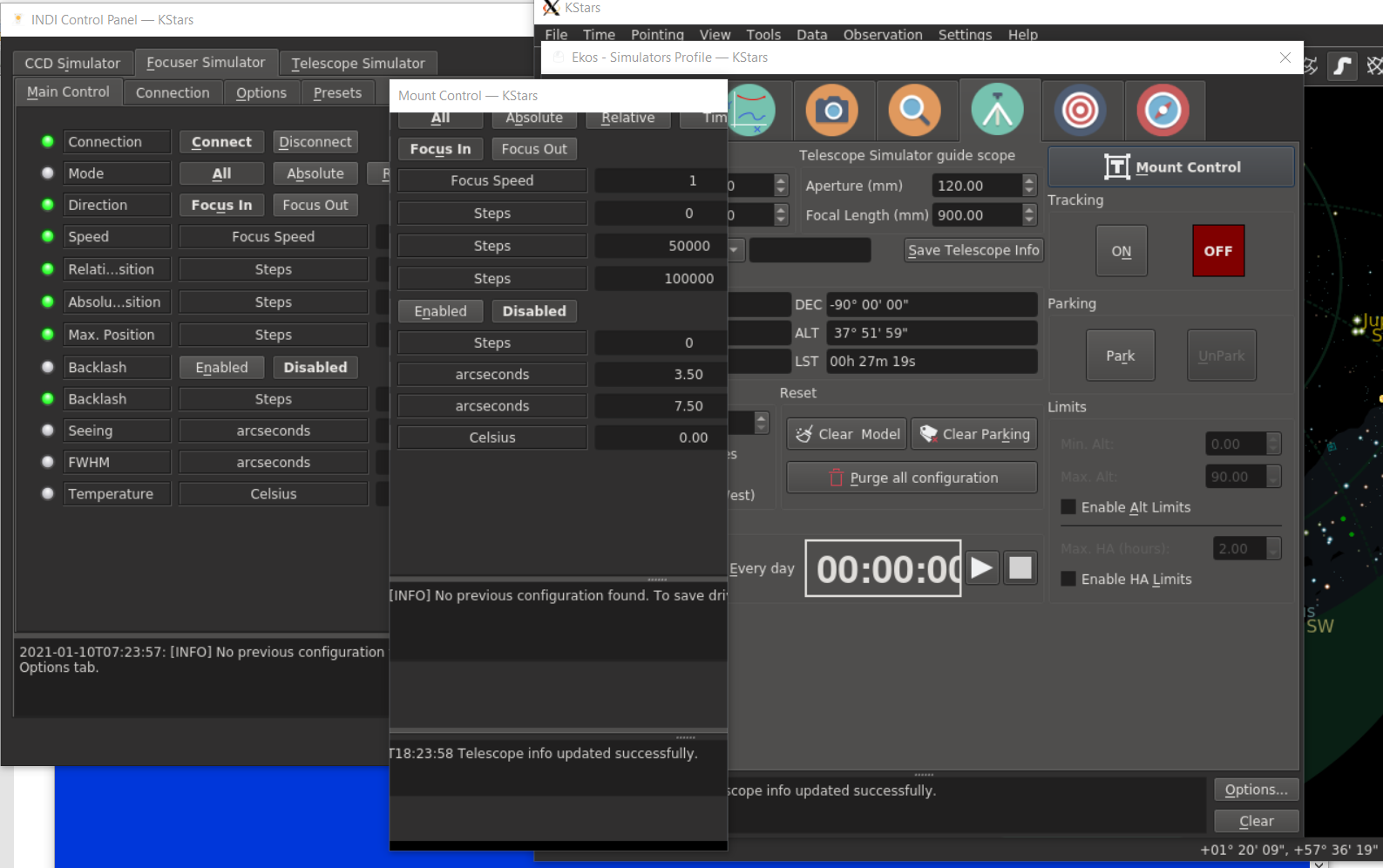 ekosdebugger on RPi3 also does not show the button graphics. I'd ike to work out why this is so. 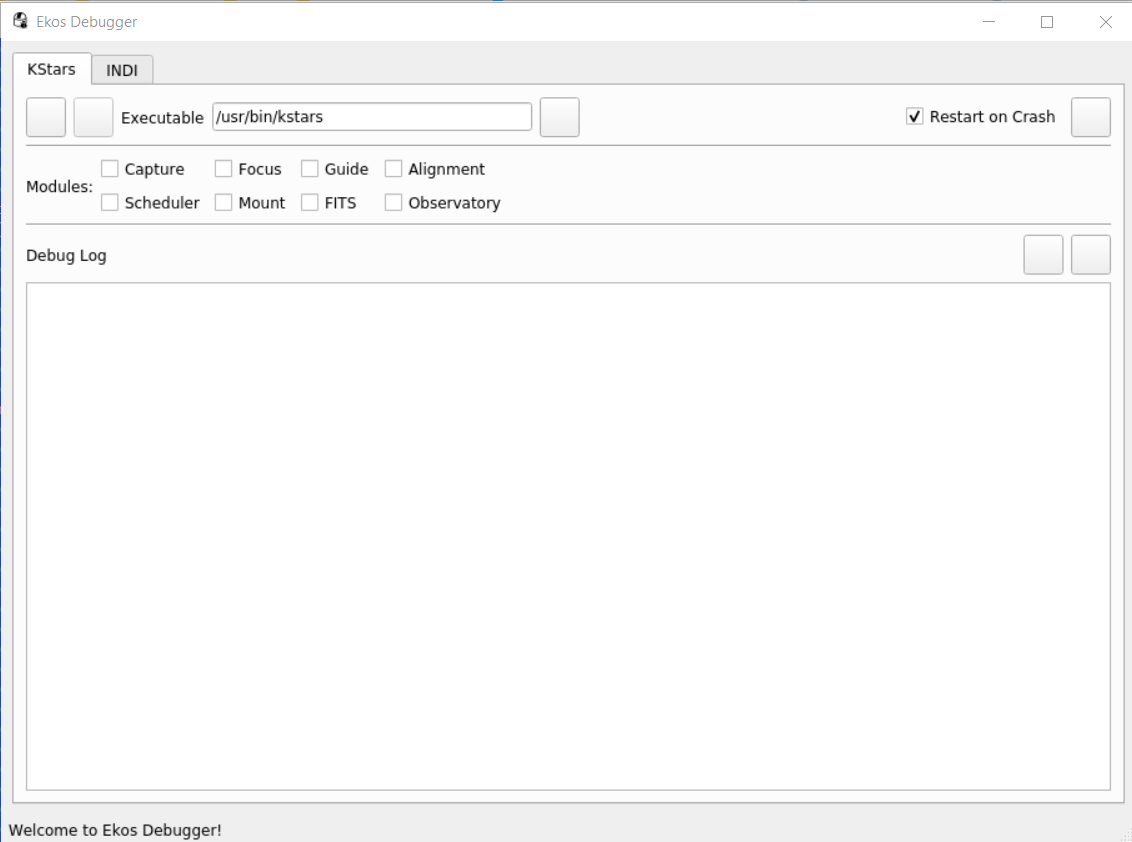 I tried launching kstars from within ekosdebugger but I killed it after >1 hour at close to 100% CPU for process kstars. I'm guessing the debug version is too big for a RPi3. Or is there an ekosdebuggerdebugger I can use

I've now got the Mount Control and What's Interesting windows displaying correctly.
Soution was to not use Windows Native OpenGL
and in WSLAlso, WSL has no sound driver so turn off sound notifications in Kstars to avoid getting an ALSA error message everytime one is issued

A few days back I ran the whole evening using kstars in WSL (without the above fixes) and still got through the evening without a crash. That has never happened when I've used the Windows version.
So next clear night I'll be trying again with the latest setup to see how it goes
-- Ken
RPi3 Ubuntu Server 20.04, Windows 10 AMD64, AAEON UP Core Ubuntu Desktop 20.04
Avalon M-Uno, EQ6 Pro, Atik420, ASI1600MM-C, ASI120MM-S, DBK21AU04, ZWO EFW, Optec TCFSi
Vixen R150S, GSO RC8, ST80
The following user(s) said Thank You: jiberjaber
1 year 2 days ago #65994

Replied by Eric on topic Re:Running Kstars/EKOS on Windows Subsstem for Linux (WSL)

Cool experience indeed, thanks for talking to yourself! I got a lattepanda board and I was wondering if I should keep the Windows 10 install or reset it to an Ubuntu 20. Your attempt gives me a new track, although I doubt there will be enough memory. Readyboost perhaps, with a spare USB key.

Replied by Ken Self on topic Re:Running Kstars/EKOS on Windows Subsstem for Linux (WSL)

Replied by Eric on topic Re:Re:Running Kstars/EKOS on Windows Subsstem for Linux (WSL)

I do run kstars on a 1GB atom system with lxde on Ubuntu 18 and z-ram tuned. I need to have the full setup executing remotely because I can't trust network stability. So that means no x11 forwarding. But while that works pretty well and stable thanks to all the great stuff implemented in 2020, this system is 32-bits, and Ubuntu 20 now doesn't have all packages built for that arch. Plus, it is restricted to usb2, which severely limits frame bandwidth. Plus, two 800MHz hyperthreads make HFR computations veeeery long... So time to explore a new SBC environment.

Replied by Ken Self on topic Re:Re:Running Kstars/EKOS on Windows Subsstem for Linux (WSL)

Replied by Eric on topic Re:Re:Re:Running Kstars/EKOS on Windows Subsstem for Linux (WSL)

it will be faster than my old 32-bit atom in any case. You installed Ubuntu 20 on that platform? Any issues except for the usual WiFi or Bluetooth driver rebuilding?

Replied by Ken Self on topic Re:Re:Re:Running Kstars/EKOS on Windows Subsstem for Linux (WSL)

Aaeon supply a kernel supporting their built in Ampak Wifi/BT chip. It was many months later than 20.04 release so I had to stick with 18.04 until last month. But no problems. I'm very happy with it and it has alway been more reliable than a Pi (although I only have a Pi2 and a Pi3). I noticed when I was experimenting witha new install of Ubuntu 20 desktop on the Pi that the network management menu did not work properly. I think you need to install Network Manager as the renderer. On the Aaeon, Ubuntu 18 already had Network Manager installed so when it upgraded to 20 it was fine. On the Pi I ended up just installing Ubuntu server but still installed Network manager so I could set up a hotspot. That's what led me to start looking at X11 forwarding.
-- Ken
RPi3 Ubuntu Server 20.04, Windows 10 AMD64, AAEON UP Core Ubuntu Desktop 20.04
Avalon M-Uno, EQ6 Pro, Atik420, ASI1600MM-C, ASI120MM-S, DBK21AU04, ZWO EFW, Optec TCFSi
Vixen R150S, GSO RC8, ST80
The following user(s) said Thank You: Eric
11 months 4 weeks ago #66211

Replied by Eric on topic Re:Re:Re:Re:Running Kstars/EKOS on Windows Subsstem for Linux (WSL)

The qt wayland compositor is also able to render KStars with any resolution through ssh (and only its application windows). It does not work very well yet because we have qml windows in the code that conflict with the exclusive opengl rendering, but that solution can be interesting for its network performance when it is stabilised.

Replied by Ken Self on topic Re:Re:Re:Re:Running Kstars/EKOS on Windows Subsstem for Linux (WSL)