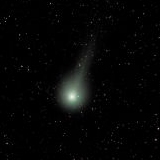 Jon replied to the topic 'Stellarmate App questions' in the forum. 4 months ago

Thanks for the reply. I discovered that my issue with Android turned out to be with the tablet itself. It failed shortly after posting about this. I'm not sure of its usefulness to me other than PA anyway. For now, I use SharpCap's PA routine from my laptop directly at the scope and run my imaging (for my wide field setup) from my PC using VNC connected to my Stellarmate at the mount.

I agree with your sentiments regarding the target triangle being off screen. I run into that all the time since I tear down and setup each time.

Jon replied to the topic 'ZEQ 25GT Pier Side' in the forum. 5 months ago

Finally got around to installing minicom and getting it setup. The mount does respond with the following when issuing :pS#

It also reports 0 when the mount is sent to the home position with the counter weight straight down.
I do not get any response with the :GEP# command.

Thanks again for your direction in helping to test this all out. It would be great to get this working in the driver for the ZEQ25.

Jon replied to the topic 'ZEQ 25GT Pier Side' in the forum. 5 months ago

Thanks for taking the time to reply and for the information.

Regarding the command set, this is what is referenced pertaining to pier side:

I do not see any mention of the ":GEP#" command.

Jon replied to the topic 'ZEQ 25GT Pier Side' in the forum. 6 months ago

Thanks for the reply. I am sure the firmware is the latest as this mount is rather aged now. I don't have it in front of me at the moment but I will definitely check. As far as the command set, I think the version I referenced was from 2013 and was version 1.4. I will also update my INID drivers but I did do that a week or so ago.
Also, I have been away from INDI for awhile and forget where to enter the command value as you requested. I know how to activate the debug log but I can't recall how to issue the command.

Jon created a new topic ' ZEQ 25GT Pier Side' in the forum. 6 months ago

My ZEQ25GT does not report pier side in EKOS. It does appear to be supported in the iOptron RS232 Command set using:

Would it be possible to incorporate this into the driver?

Jon replied to the topic 'Stellarmate Align Module Problem' in the forum. 6 months ago

Thanks for the reply Ron.

Lower end mount it is....iOptron ZEQ25 and I am using a large FOV scope/camera setup as well. I'll try your 360arcsecs. accuracy and see how I get along.

Thanks much for the reply and clear skies....

Last night while using my gear to image M45, I had a problem where the align module would never reach the 60arcsec accuracy during a solve/slew. The target actually seemed centered but the module kept reporting an error of around 366 arcsecs. It ran a solve/sync without any issues. I went outside to watch the solve/slew after the MF and noticed there was one correction after the flip (from the solver )but there never seemed to be any additional movement at all for all the subsequent attempts to re-center during the solve. It is as if the centering is actually good but the solver, for some reason, thinks it isn't and keeps trying to correct it but the mount never moves because it is already aligned.
I also noticed the FOV was in red text suggesting to change the "effective" FL in mm to speed up solving. The supplied FL (242mm) is correct for the EVOGuide 50ED so I am not sure what that is about.
I realize that I need to run the debugger for this to generate some logs but it was late and I didn't want to interfere with my imaging run. Thought I would mention it here in case others were experiencing the same or had seen it before and could offer suggestions.
Thanks!

Jon replied to the topic 'Stellarmate App questions' in the forum. 6 months ago

I wondered the same thing. Which OS are you running the app on? I can't get PA to run properly on Android tablet at all.

Jon created a new topic ' Stellarmate 1.6.1 via Android tablet failure' in the forum. 6 months ago

PAA on Stellarmate 1.6.1 is not working well at all for me on Android (V9) tablet. It does well until it gets to the plotted triangle and then it becomes sluggish during the refresh and eventually becomes totally unresponsive. No buttons or any other aspect is accessible forcing me to close the app.

Jon created a new topic ' Temperature regulation with ASI533MC' in the forum. 6 months ago

I can try and capture some logs next time out but was wondering if this was a know issue.

I run a small rig with a rather large FOV (~3 degrees +-). In the targets tab, the FOV frame becomes rather garbled when choosing this large FOV for framing. Would it be possible to scale down the target image frame when going over a certain FOV (or some other technique) in order to better  accommodate the framing information? Thanks!

Jon replied to the topic 'Observatory 17b' in the forum. 5 years ago

Meant to ask, what are the clear dimensions that you are using for the opening? I am looking at doing something similar but I am having trouble deciding how much clearance I need. Is there some relationship you are using? For example, how long is the longest point of your setup (i.e. the length from the tip of the counter weight shaft to the top of the scope.) How much clearance did you leave? Thanks and I hope you are making progress with your network.....

Magnus thanked Jon Kellum in topic Observatory 17b 5 years ago

Jon replied to the topic 'Observatory 17b' in the forum. 5 years ago