Phil created a new topic ' Connecting to Astrroberry from a tablet' in the forum. 9 hours 35 minutes ago

Phil replied to the topic 'Barlow/Reducer Checkbox?' in the forum. 6 days ago

You mean in the INDI Control Panel? Unless there's a software complications, wouldn't it be easier to have it in the mount module? This way you can just activate it or deactivate it as needed by just clicking a check box.

Good thing to have it somewhere anyway. smile.png

Phil created a new topic ' Barlow/Reducer Checkbox?' in the forum. 7 days ago

Is it possible to add a Barlow/Reducer checkbox to the mount module lens configuration section so you add such hardware and check it on/off as needed with any given scope? This way you just enter the mag or reduction, check the box on or off, and Ekos automatically computes focal length and aperture relative to the main imaging scope in your drop-down list for plate solving and such?

Phil replied to the topic 'Two Questions On Ekos & PHD2 Drift Plots' in the forum. 2 weeks ago

Thanks, not sure how I missed that LOL. I think I got distracted with the radius button, which was throwing me off because it's missing it's + side.

Phil replied to the topic 'Two Questions On Ekos & PHD2 Drift Plots' in the forum. 2 weeks ago

Perhaps I simply didn't explain what I'm referring to correctly. Using the screen grabs that I've posted, if you look at both the Ekos drift plot and the Windows PHD2 drift plot, even though the radius reference limit is set to two arc seconds, the plots both measure out to FOUR arc seconds. The PHD2 drift plot on the Astroberry however ONLY measures out to TWO arc seconds. What I want to know is whether there is a way that you can set the drift plot in PHD2 on the Astroberry to also measure out to four arc seconds, just like it is in the Windows version, while maintaining whatever radius limit that you've set, which in these examples is two arc seconds. Is that clearer?

I'm curious about two things when guiding in Astroberry. 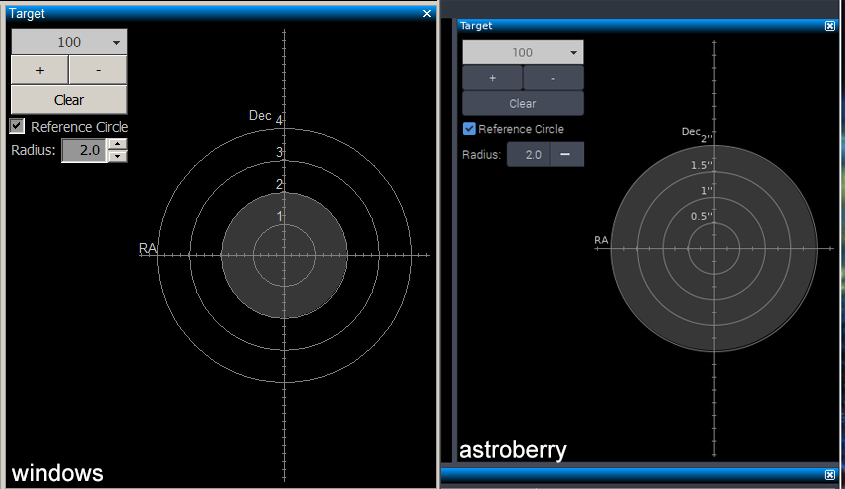 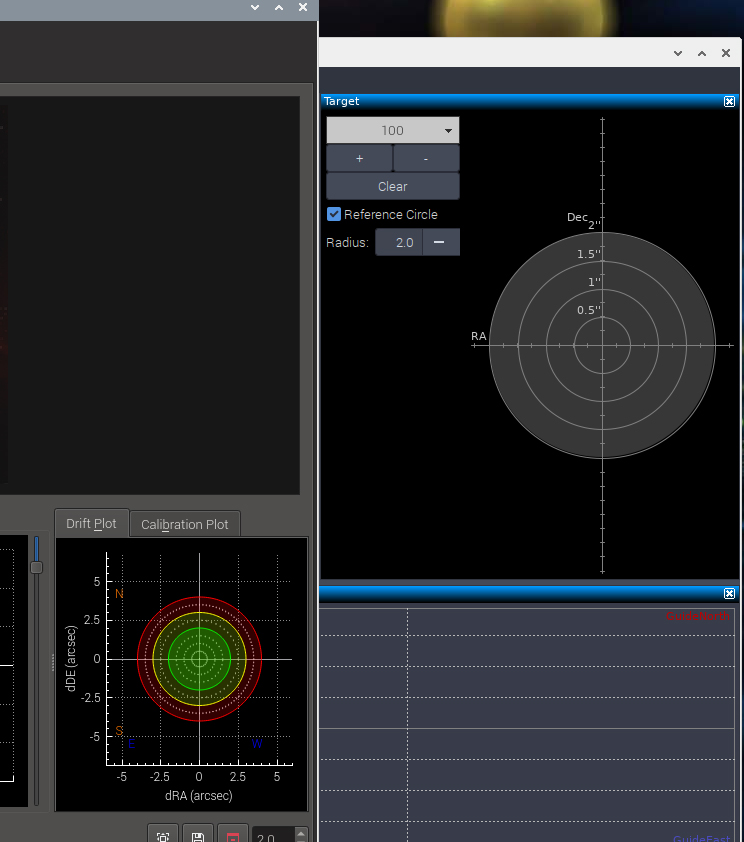 OK great. I was concerned about this because in that thread I posted that WASN'T the case, PHD2 was being controlled by Ekos, and the Ekos parameters would supersede the PHD2 parameters.

Thanks for your replies.

Well, unless I'm mistaken, the problem with that approach is that you can't control PHD2 from Ekos that way, hence you can't dither. Correct?

Sooo...should I take that as a "no", I still can't make use of PHD2 setup parameters in the Ekos guiding module routing PHD2? smile.png

Phil replied to the topic 'Ekos Guider Tracking Error' in the forum. 1 month ago

Well that's a screen grab from my Astroberry, I just opened up the simulator so I can do the screen grab. However I will look to see what he has it set to.

Phil created a new topic ' Using PHD2 Parameter Settings in the Ekos Guider' in the forum. 1 month ago

Hi folks, I know there is an option to use the PHD2 guider in the Ekos guider module, but I read in a post made over a year ago that Ekos only uses guide data from PHD2. Is this situation still the same, or has it changed? Is it now possible for Ekos to guide using PHD2 parameter settings?

The reason I ask is because, as far as I know, the Ekos guider does not have some features in PHD2, most notably the PHD2 Guiding Assistant, which creates an optimized profile for your mount. I would like to guide using this optimized profile in Ekos.

I was helping a friend set up his Astroberry rig, and we got everything in place, and when we went to start guiding, it failed and we got the error listed below. His mount is a SkyWatcher Star Adventurer.

At first we thought it may have been trying to track in DEC, so we turned off the settings shown below, which should be turned off for his single tracker mount anyway, right? We still got that error message.

However we started PHD2 up and it did not have any problems guiding, it worked perfectly. We tried the Ekos guider one more time and got the same error massage again.

So what would cause the Ekos guider to display that error message?
Thanks. 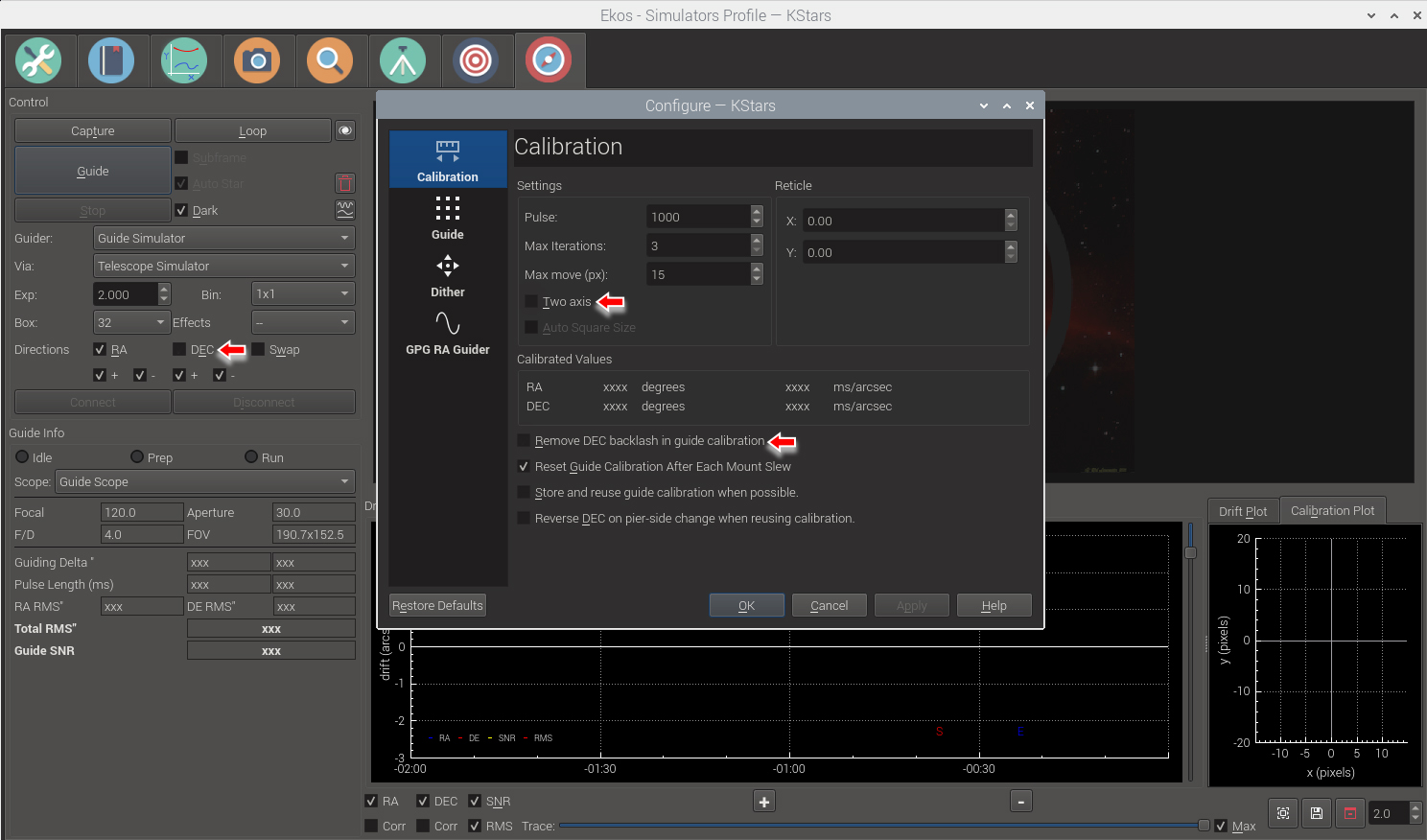 Phil created a new topic ' Using the focus module for manual and auto focus' in the forum. 2 months ago

Hi folks, my question is two-fold.

First, I'd like to use the Ekos focus module to manually focus with a Bahtinov mask. Now I found some old threads from 3-4 years back that seem to allude to being able to do this, but they're not clear on some things. Also, I was watching one of the old Stallarmate videos on the focus module, and looking at what is there now things have been shifted around since the video. I see for instance that Bahtinov has been added to detection, but I'm not sure how this is used, or if I even need it when using a Bahtinov mask. Activating it doesn't appear to do anything. I also see autostretch under effect, but it doesn't seem to do anything, but there's a toggle stretch button in the transparent buttons that seems to work and is on by default, is this the same process? Right now I'm just testing this looking at a starfield in Stellarium, so I haven't used this module in the wild, so dunno if using the starfield on the computer screen is confusing the processes. Basically I want to be sure I can effectively see a star clearly enough while a Bahtinov mask is on the scope, but things don't appear to be responding as I think they should. I see a live view button, but that window doesn't appear to have an autostretch option, so I don't think I'd be able to use it for focusing with a Bahtinov mask. The INDI docs I found on the focus module only cover using it with a motorized focusing unit, is there any docs on how to use this module manually? I'm a bit at a loss as to how to do so, inasmuch as it does appear to be possible.

Now with auto focus, can this module control a DSLR autofocus lens? I have a friend I'm helping to set up with an Astroberry setup, and he'll be using AF camera lenses as opposed to my manual focus telescope. Can his AF lenses be effectively used for continuous AF while shooting, or is he better off just manually focusing? If so I take it the process is as described for using the motorized telescope focusers, correct?

Thanks for any info on this.

Phil replied to the topic 'General Astroberry and Pi password questions & question on potential WiFi interference.' in the forum. 2 months ago

Thanks for your reply.

In the WiFi channels, the band defaults to 2.4 gig for the Astroberry, and the channel say default. Does default mean automatic? There is an auto setting for bands, but not for channels.

Is the Samba password also defaulted to astroberry? Does the sudo smbpasswd astroberry command put you in the change password mode? How critical is it to change Sanba and VNC?