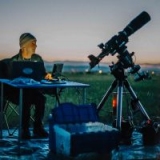 Hy Murveit replied to the topic 'What happened to kstars?' in the forum. 2 weeks ago

Alfred, if you message me, perhaps we can set up a time to zoom and I could look and see if I could get cmake it to work for you.
Hy

Hy Murveit replied to the topic 'Unguided dithering not working' in the forum. 2 weeks ago

What software are you running that fails in this way? Are you using nightlies? If so, can you show the full log so we can see when it was compiled. Do you know what software was previously working so we can narrow down where to look for the issue?

Hy Murveit replied to the topic 'macOS - Dialog windows appear behind all other windows (which can be bad)' in the forum. 4 weeks ago

FYI, Rob is working on the issue.
invent.kde.org/education/kstars/-/merge_requests/827

Hy Murveit replied to the topic 'Fornax Mount support?' in the forum. 1 month ago

Wouldn't it be great if Fornax themselves contributed the driver?
I'd suggest that if there are a number of customers or potential customers of Fornax, then you contact Fornax and see if they'll do it.
Hy

Hy Murveit replied to the topic 'macOS - Dialog windows appear behind all other windows (which can be bad)' in the forum. 1 month ago

This can be fixed for sure. It would be helpful if some people could try and list the offending windows you know about and can find
(e.g. play with simulator and make a list) in addition to the "Port Selector" window. I personally don't run on mac.

Hy Murveit replied to the topic 'Is it possible to transfer flags from one Astroberry setup to another?' in the forum. 1 month ago

I have never tried to restore flags from these files, but as I understand it, there are 3 places you might try to restore (on Linux):
~/.local/share/kstars/userdb.sqlite
~/.config/kstarsrc
~/.indi/*

Hy Murveit replied to the topic 'Statistics of region of interest' in the forum. 2 months ago

The releases come every 2 or 3 months, however you can download the most recent "beta releases" all the time on Ubuntu and probably a few other platforms. They reflect the latest successful compile of the latest code.
For instance, see indilib.org/get-indi/download-ubuntu.html (and follow instructions to switch your updates to the "nightly" ppa). You can then later switch back to the stable one if you wish.

The build progress page code.launchpad.net/~mutlaqja/+recipe/kstars-nightly shows when the various nightlies were built, so those should have this change. Of course, you'd see when you went to that options menu (if the clipping parameters were there or not).

Hy Murveit replied to the topic 'Statistics of region of interest' in the forum. 2 months ago

Bill, the control is in the KStars Settings, Configure KStars --> FITS menu.
It doesn't refresh automatically, so if you make changes and want to see the result you need to toggle the clipping control twice

I believe the classic scheduler will not start the next job until the current job is done, even if the current job can't run. That's the reason I wrote the Greedy Scheduler. Honestly, I don't see a use case for classic.

No need to send the logs/files if Greedy works

You can definitely control the scheduler with a terrain picture and artifical horizon limits. See for instance this video for setting up the terrain image www.youtube.com/watch?v=fk2-Ow1tl1s and for instance see this post re setting up an artificial horizon indilib.org/forum/wish-list/6721-ekos-sc...onstraint.html#74088

Setup logging as below (1- go to the setup tab, 2- select log, 3- choose verbose, file, and select most of the Ekos modules. 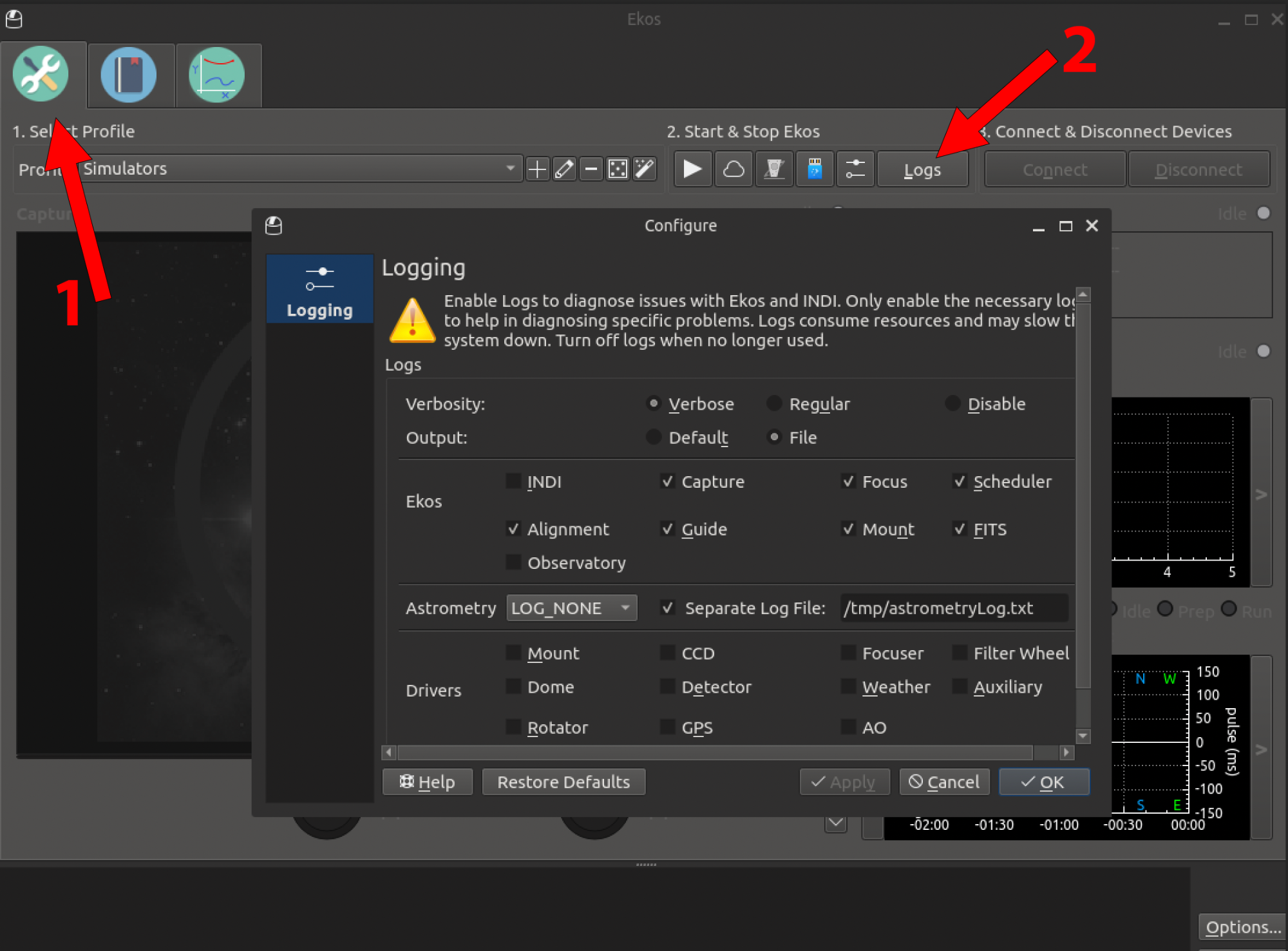 Not sure I fully understand your issue, but in case what you're asking is why it didn't go on to a different target, please make sure you are using the greedy scheduler algorithm. The "classic" scheduler never does that.

If that doesn't solve things, please attach the scheduler (.esl) and sequence (.esq) files you're using along with the local time you ran, and your approximate lat/lon, (and a debug log if you were recording one). Please also repeat more specifically what the expected behavior is and what it did instead. Then I'll see if I can figure out what the issue is.

Hy Murveit replied to the topic 'On Raspberry PI, the solver does not work with the Ekos alignment module.' in the forum. 2 months ago

A Common issue/solution is that the wrong scale or position is passed to the solver, causing the solver to spin its wheels looking in the wrong place or at the wrong scale. Thus, often when people have solving issues, unchecking Use Scale and Use Position helps. That said, in @tkakura's screenshots he shows unchecked Use Position and unchecked Use Scale as failing. Note that in his screenshots, the failing positions and scales values are quite different from the successful ones.

@Paul, you should know what your true scale and true approximate position is, so make sure those are about right if you do use Position and Scale, and see if it works. It could be your system was somehow initialized to a bad value. I have definitely seen cases where for whatever reason, the scale is filled in with a wrong scale, and if use-scale is checked, the solver has no hope of succeeding. Also, make sure you're in focus.

A Raspberry Pi 4, being a slower CPU, could use the position and scale to improve response time, but only if they're reasonably accurate.

If things don't work, can you upload (e.g. google drive with a link here) an image you can't solve. That is, capture an image with the same exposure/binning/focus as align uses.

PS "Blind solves" and non-blind solves aren't really that different. That is, the solvers find star patterns in the test image and then search for those patterns in their data files. So, they all start somewhere. I suppose the difference between a blind and non-blind solve is that in the blind solve, the solver starts at some random place (like RA=0, DEC=0, scale=1) and then continues looking at all possible scales and positions. With non-blind solves the start from the suggested position and scale and searches nearby before looking further away (within the constraints given, e.g. possibly the high/low scales, possibly the search radius, the runtime constraint). In the align module, I believe if you don't check use-position, the solver will start from where the telescope module claims it's pointing (so it's not really "blind").

@Daniel, I just submitted into the latest code a fix for your original issue, that the scheduler wasn't paying attention to the mount's altitude constraint. See here invent.kde.org/education/kstars/-/merge_requests/803

Please let me know if it fixes things if you can either compile from the latest source now, or test the overnight build in a couple days.
Hy