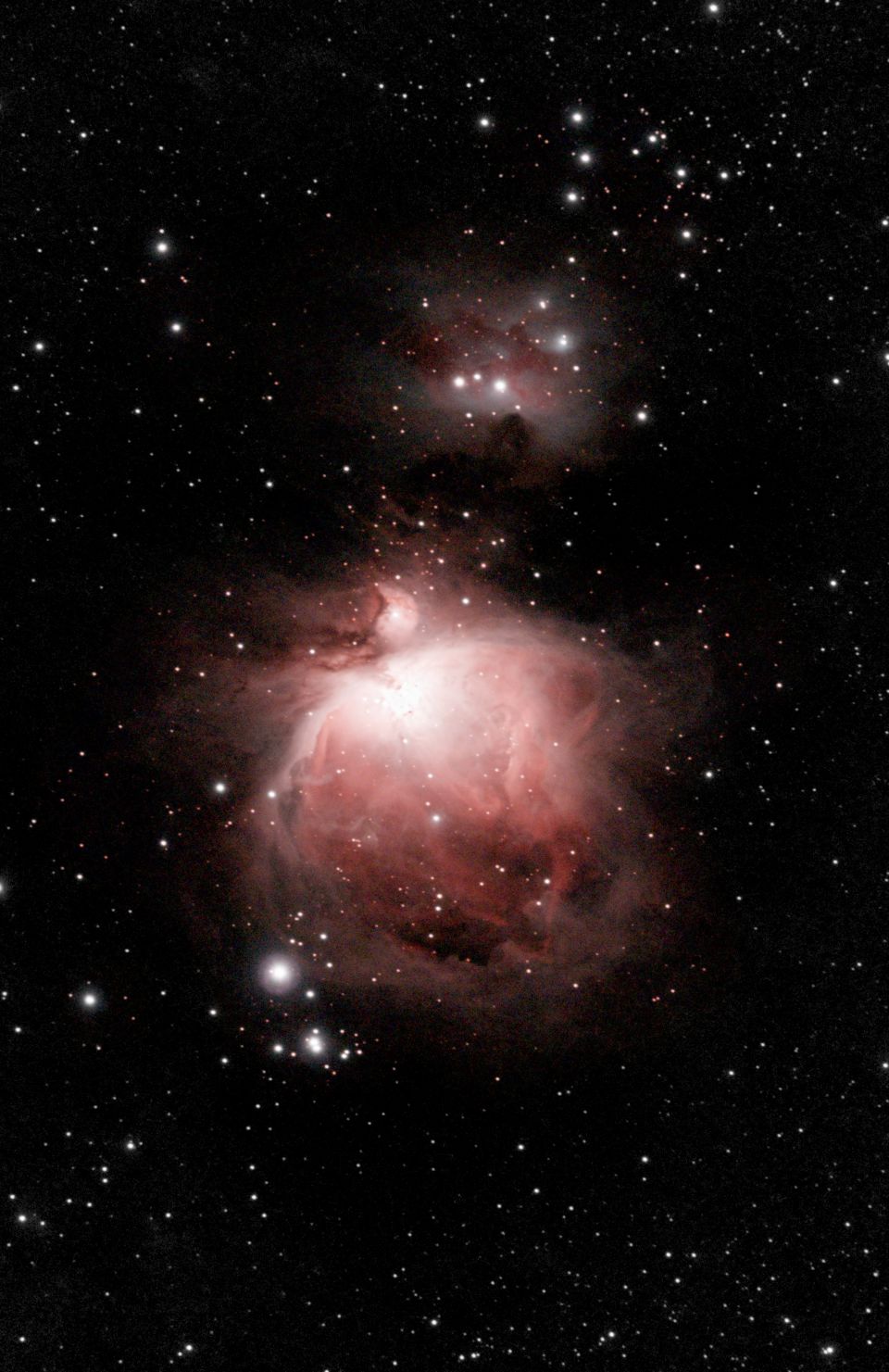 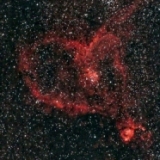 Jose Corazon replied to the topic 'CEM25P users - DEC backlash problem' in the forum. 1 week ago

dx_ron wrote: Finally got clear sky for an evening. Lots of moon, so I don't even feel bad about having to spend it testing guiding. I started pointed east, within a half-hour of the meridian near the zenith. Ran GA twice and got 2490ms and 2775ms backlash. Not great, but it can probably guide OK with that.
But then I moved to the west, pointing at M45. Ran GA and got >21000ms. Tried various settings for the tension knob, but always >19000ms. So it looks like adjusting the dec mesh is my weekend project.

I think I have a decent idea what is supposed to happen. I will check the hinge tightness. But in terms of the mesh, it is basically: loosen the 3 hex screws along the hinge, lower the worm onto the ring gear. It should seat itself and in doing so move the hinge into the correct position. Then you just tighten the 3 hex screws to hold it there. I understand the part about moving the gears to find where it still binds and then re-doing the mesh there. Guess I'm just looking for confirmation that my view of how "adjusting the mesh" works is correct.

Did you watch the Paul Chasse ZEQ25 videos? I'm not sure what it is about putting a spacer between the tension screw and the hinge during the re-mesh accomplishes. My best guess is that it evens out the pressure along the hinge a bit. Did you do anything like that?

Thanks for this report! I have seen the same thing repeatedly, guiding accuracy on the same target shifting dramatically after the meridian flip. It can only be mechanical. I have not done much imaging over the last two months for personal reasons, but on the two occasions I did I thought I had that problem pretty much gotten down to a minimum.

I did not know about the ZEQ25 videos. Can you post the link?

Jose Corazon replied to the topic 'CEM25P users - DEC backlash problem' in the forum. 1 month ago

Looks like you have already gotten a good grasp of the parameters. Fine tuning them is a matter of trial and error. Also make sure you are well balanced in DEC and that you have no cable drag.
The main drawback of the DEC stepper motor is its current limit, which is about 2/3 of the RA motor (for my CEM25P). That means that the motor is prone to losing steps if there is ANY excessive drag.
As you found out, overtightening the tension screw can induce such drag.
As for sufficient pressure on the worm gear: I now wiggle the mount in DEC while tightening the tension screw. Once I can no longer feel a discernible movement, that's when I tighten another half turn, then stop. I found that to work best in my hands. Depending on where the telescope is pointing, i.e. how much potential torque there is on DEC, I can now get the DEC RMS down to <0.5 on a good day.

All that being said, I think we have to be realistic and accept that a low end mount like the CEM25P is not optimal for telescopes with a focal length of >500 mm. I am using it with a WhiteCat (250mm focal length) and for that it is perfect.

Jose Corazon replied to the topic 'Looking for ASI 120 MM USB 2.0 camera firmware --- asi120mm-compatible.iic' in the forum. 2 months ago

MirkoV wrote: Hello Thanks for pointing that out !!!

I downloaded the file again and .... the content is now changed (from few days ago) and I can see the ASI120MM-compatible.iic is there now
Interesting they did not change the zip file name

Anyway, I now flashed the firmware and I can now confirm that my 120MM now works and acquires images correctly!!!!

Thanks all for your support

I would not get my hopes up too high. I also thought that the camera would be working fine after flashing it, I got images and celebrated victory.
Unfortunately, upon using it for real I found that it would periodically garble a frame, thus completely throwing off the guiding and destroying frame after frame.
I would suggest you get the 120MM-S (USB3 version). No problem with that at all now in almost 2 years of continuous use.
It will save you a lot of frustration.

I think I got DEC pretty well under control now. Need to work on RA next: 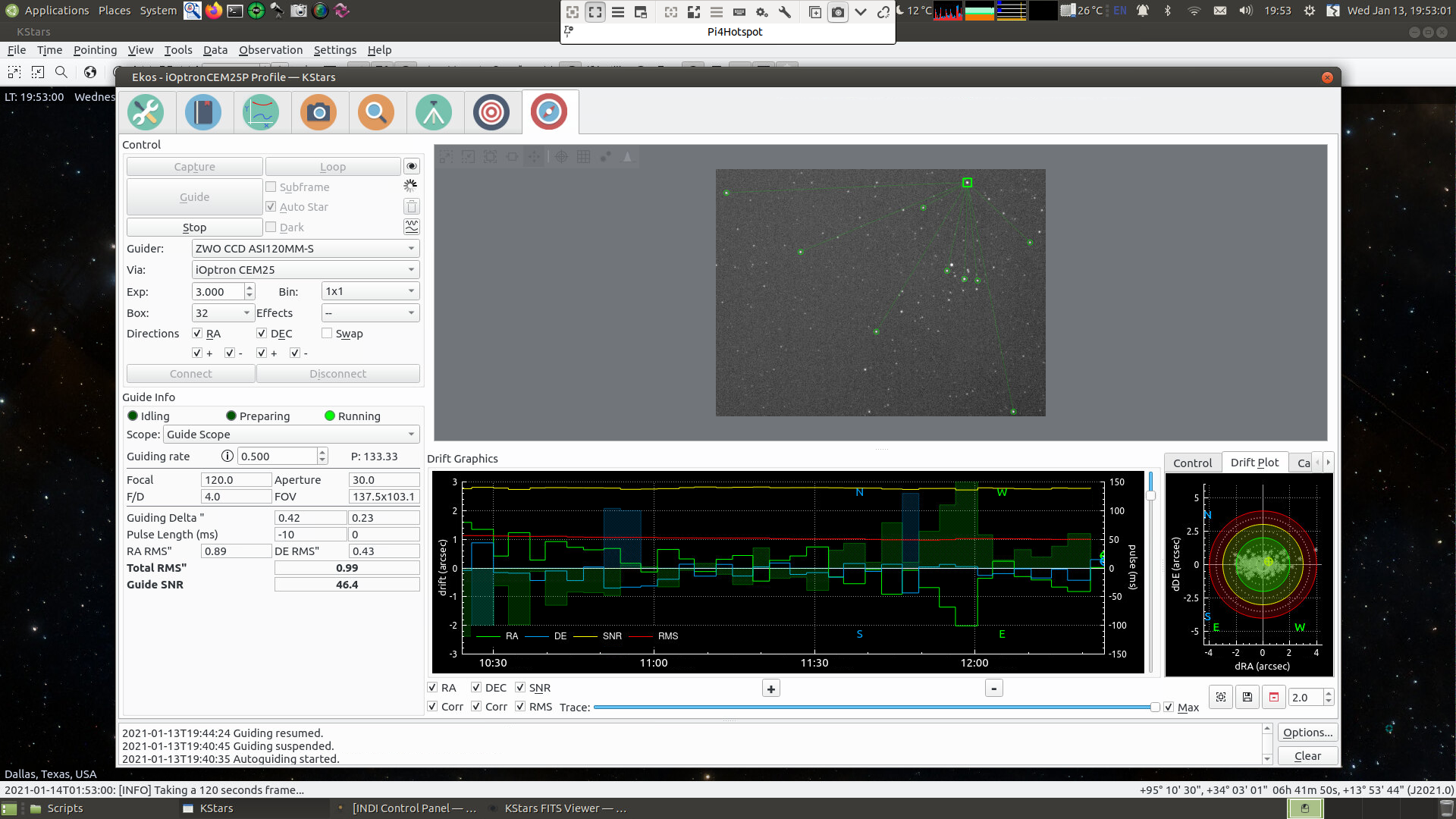 For the most part. That sawtooth pattern is - I think - the result of mechanical tension that builds up as the mount fails to move in DEC until the tension breaks and is released, resulting in the overshoot in the other direction. When you adjust the tension, feel every moving part and determine whether anything snags, has resistance, etc.

Frankly, from looking at the simple construction, I am amazed that the mount can perform as well as it does (most of the time now) for me.

You have to take the DEC cover off, straighten the belt and then tighten it so it has no more than 3 mm slack when you press it down in the middle. Having the proper tension and it running straight is key.
Nonetheless, this remains finicky. For instance, I can now get outstanding DEC guiding with an RMS of 0.5" early in the evening, only to see it fall apart and disintegrate to >1" after the meridian flip. That shows the mechanical limitations of the mount.
You will have to get a feel for how much tension the belt should have and whether the axle is running tight, but without excessive resistance, etc. A real problem IMO is that the DEC motor is drawing about 40% less power than the RA motor, which results in it losing steps whenever there is too much resistance.
Also, make sure that the mount is perfectly balance in DEC and that there is no cable drag. With those weak motor, you have to strive to eliminate any potential mechanical interference.
Hope that helps,
Jo

Jose Corazon replied to the topic 'FireCapture on SM OS' in the forum. 2 months ago

Perhaps a naive question, but how hard would it be to integrate Planetary Imager into Ekos?
That is a dynamite platform for planetary work with monochrome or a OSC camera. Unfortunately, with my feeble Linux skills I have so far not been able to compile it on the Pi4, although it ran on the original Pi3B+.
If that could be integrated into Ekos, it would be a mind-blowing addition to the system.
Jo

Thanks, Wouter, but I am confused now.

On Cloudy Nights you write: "....after resetting the alignment model in the CEM25P hand controller and disabling DST (and setting the UTC offset such that it compensates for DST manually), it works like a charm. Pointing using plate solving, meridian flip, parking all work very well."

Does that mean that parking does indeed also work in your hands with the CEM25P, not just for me, and that the problem is isolated to the GEM45?

I know that you don’t and we have already compared our INDI config files which are exactly the same. Apart from that, I am not the only one who has parking issues with a CEM25 or GEM45 and to my best of knowledge there are many more people with issues than without (actually I think you’re the only one without).

FWIW I use the stable release and have had this issue since we started using this mount which is over a year now.


Yes, I know we compared the config file and I know they did not explain the discrepancy. However, the fact that my mount parks reliably does indicate that this cannot be a systematic Kstars problem, but either has to be a misconfiguration either of an Ekos or Indi file, or, perhaps most likely, in the hand controller. I never used that for anything, except for setting the Zero, i.e. home position, which is also the parking position. That may be the reason why I am one of the few who do not have these parking issues.

I think it is possible to control the mount directly without the need to go through the hand controller, but I do not have the required cable for that. Do you - or anyone else having these problems - and have you tried that? That would help tremendously with trouble-shooting, as it would allow one to narrow the issue either to Indi/Ekos or the hand controller.

wvreeven wrote: What about CEM25 and GEM45? Did the park behavior get improved for those as well? If yes then I can test with those mounts if you want.

At least with the CEM25P I have absolutely no problem with parking. Works like a charm at my end.

I wonder whether the problem is rooted in a misconfigured file somewhere. At least that is what I suspect my problem was when the refocusing on filter change no longer worked for me:
indilib.org/forum/ekos/8421-solved-refoc...ger-works.html#64997